You are here: Home1 / Planning2 / The City of Houston’s Problematic Requests for the I-45N Project

For the last 10 years the City of Houston (CoH) has worked as a partner in the development of the plan North Houston Highway Improvement Project (NHHIP). Now, within weeks or months of a record of decision on this plan — the I-45N project, CoH is abruptly changing its position and for Segments 1 and 2 is requesting drastic changes that are harmful to mobility, safety, and aesthetics. This blog post looks at the negative impact of the CoH requested changes for Segment 1, which is the section between Loop 610 and Beltway 8.

The main features of the CoH request for Segment 1 are:

Very Harmful: Loss of the HOV lane for carpools and vanpools

Carpools and ride-sharing will be forced onto the main lanes, eliminating a strong incentive for carpooling and worsening traffic in the main lanes.

Huge Loss for Future Mobility: elimination of the managed lanes

Managed lanes are the most effective tool for providing options to freeway congestion and are widely used nationwide. Metro bus ridership on the Katy Freeway managed lanes exceeds all of the three most recent light rail expansions (see chart). The NHHIP managed lanes are currently planned to be toll-free but may be restricted to high-occupancy vehicles only at peak periods, providing a strong incentive for carpooling. The Katy Freeway managed lanes generated $22.5 million in revenue in 2019, an amount which is 33% of Metro’s (separate) 2019 systemwide farebox revenue of
$67.5 million. The CoH request to eliminate the managed lanes is a huge loss to the future mobility of North Houston. 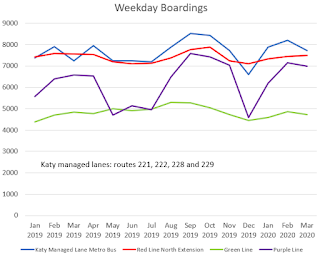 Source. For comparison, segment 1 of Interstate 45 serves average traffic of 282,000 vehicles per day (average of 4 locations).

When study of this corridor began in the early 2000s, the community said it wanted transit first so the $756 million Red Line extension to Northline opened in 2013 and Metro Solutions includes a $634 million extension to North Shepherd. Ridership has been low on the Red line, averaging 7,414 weekday boardings over the last 15 months, which is only 24% of the original Red Line on a per-mile basis.

New dedicated transit lanes on Interstate 45 will duplicate the costly Red Line and cannibalize its ridership, reducing the Red Line’s already low ridership. It is far more sensible for the Red Line to serve the local transit needs in the corridor, and for Metro’s BRT to operate on TxDOT’s planned managed lanes and serve longer high-speed trips, such as to Bush Airport and Greenspoint.

The North Freeway Segment 1 is not a scenic corridor. In fact, it is among the most unattractive of all Houston freeways (which is saying a lot), and this has always been a sore point with local promoters since it is the first thing many visitors to Houston see. As the CoH document says, “I-45 North is a major gateway to Houston”.

A narrow, fully-paved corridor as requested by CoH will maintain the unsightly status quo and leave virtually no space for landscaping. With the TxDOT plan, there are typically 30 to 40 feet between the main lanes and frontage roads, a perfect setting for landscaping. Consider the West Loop in Bellaire, where we now have a nice forest of trees between the main lanes and frontage roads. This is possible with the TxDOT plan, but not with the CoH request.In addition, TxDOT’s proposed plan is slated to remove 24 billboards. This will be a great improvement for the aesthetics of the corridor, similar to the improvement achieved with billboard removal along the Katy Freeway. If there is no right-of-way acquisition as requested by CoH, there is no need to remove billboards.

Segment 1 is one of the main truck corridors for freight movement in Houston, and truck traffic is projected to increase 21% by 2045. The overall NNHIP corridor includes five locations in a list of the 250 worst truck bottlenecks nationwide, in ranked positions 8, 11, 13, 25, and 65.

For a corridor with heavy truck traffic, you generally want high design standards including standard-width 12-foot-wide lanes, ample and long auxiliary lanes for safe merging, geometric design which meets standards, and traffic moving at posted speeds outside of peak periods. The CoH request is the opposite of those needs.

Attention CoH Planners: frontage roads are not the same as city streets

The CoH request says “The frontage roads and frontage road intersections should be designed as city streets and not highways”, including lane widths (narrower) and off-street bike paths. This ignores the reality that frontage roads handle different situations than a neighborhood street. Vehicles exit from the freeway at high speed, and vehicles entering the freeway are increasing speed. Intersections must handle heavy traffic volumes, especially turning movements, and heavy lane weaving is normal. Furthermore, there are very few neighborhoods immediately along segment 1. Let’s be real: how many people are going to bicycle to a car lot, retailer or Gallery Furniture?

Right-of-Way Acquisition: CoH is no longer using a logical approach

CoH is suddenly hell-bent on preventing any right-of-way acquisition on Segments 1 and 2. While displacements are always unfortunate, this subject must be approached logically in terms of the existing situation, benefits, and costs. Items to consider include:

More on How Density and Transit Relate to the Pandemic