You are here: Home1 / Blog2 / More on How Density and Transit Relate to the Pandemic

The last week has been crazy, with at least several weeks worth of new items coming over the wire, including some new items related to last week’s post on how density and transit relate to the pandemic. Continuing that theme: 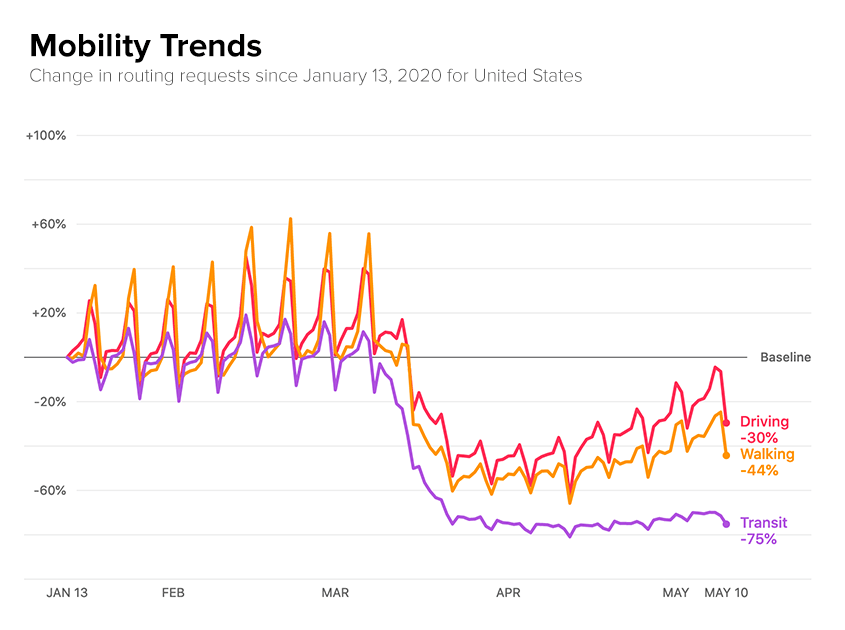 “For many years we have a lot of aspirations for transit: We want it to beat traffic, fight climate change, and revitalize communities,” he said. “But the two things it has demonstrably done in last half century is provide mobility for those without — whether that’s due to age, income, or disability — and allow highly agglomerated places function. My educated guess is that we will see the rise of transit as a social service.”

“For some New Yorkers, it’s time to get out of town for good.

Cooped up and concerned about the post-Covid future, renters and owners are making moves to leave the city, not for short-term stays in weekend houses, as was common when the pandemic first arrived, but more permanently in the suburbs.

While some of the fresh transplants are accelerating plans that had been simmering on the back burner, others are doing what once seemed unthinkable, opting for a split-level on a cul-de-sac after decades of apartment living. Others seem to have acquired a taste for country life after sheltering with parents in places with big lawns or in log cabins. But there’s also a sense that in today’s era of social distancing, one-person-at-a-time elevator rides to get home and looping routes to avoid passers-by on city streets has fundamentally changed New York City.”

“I feel sometimes like I am only safe in my car”

“I lived in the tri-state area for four years. We had a chance to live in New York City and politely passed. The subpar public schools, the insane competition and cost of non-diverse private schools, the constant noise, the grime, and hassle to do normal things were completely unappealing. Not to mention the (over) price of real estate. I went to an event at a $10M Soho loft apartment. It was beautiful, but the owner couldn’t escape the constant noise from the street below. And for what? Access to a new craft cocktail speakeasy that I would never go to anyway? A Michelin star restaurant that’s booked up months in advance? You get the most efficient value of a city like that by living in a close in suburb. We lived in Montclair, NJ where you could get high quality restaurants, bars, independent theaters, unique shops and boutiques, and even concert venues walking distance from your house. A friend lived in Park Slope and we talked constantly about the respective quality of our lives. Most of the things he talked about he never actually enjoyed. Once big cities got gentrified, they lost their edge anyway. The urban suburban town is the city of the future. All of the shops/bars/restaurants in very close proximity, easy access to the city for the weekend/occasional cultural immersion, quality public schools and an overall easier life. Big cities ask too much and return too little in terms of how people actually live beyond the young, single professional or retiree years.“

“Top state and city officials are already contemplating the need for radically different routines, including transit systems with limits on occupancy for trains and buses. That could require staggered shifts for millions of workers.

“I don’t know that it’s going to be possible to have rush hours,” said Rick Cotton, the executive director of the Port Authority of New York and New Jersey, which operates commuter trains to and from Manhattan.

My thoughts: I just assumed they would do the Asian protocol with masks and cleaning, but if they’re truly going to cut down the occupancy of the trains (which, to be safe, they do), I’m not sure NYC really works anymore. You can talk about staggered shifts all you want, but office workers already do that naturally, with many spreading out arrivals from 7am to 9:30 or even 10am. Yes, you can stagger shift workers, but I just don’t think there is any reasonable set of shifts that will reduce the crush of office workers. They’ll just have to work remotely for the foreseeable future. And if that’s the case, how many will stay in the city vs. move elsewhere? And then when there is a vaccine, what are the odds they’ll move back?

Try to imagine this in a couple of months: most of the country is operating back to semi-normal with some distancing, but NYC is still in lockdown. Will large employers start to seriously explore moving? Which employees really have to be in NYC? And has that definition of “have to” changed in a video meeting world and electronic trading markets? And if they do move, do they go to the suburbs of NYC, or elsewhere in the country?

Just as Texas has been preying on California companies for a while, you could get a feeding frenzy of cities and states across the country trying to lure companies out NYC. And who wins that game? Florida? North Carolina? Texas?

That’s enough for this week – apologies for the length.

One Nation, Under Lockdown, Divided by Pandemic