You are here: Home1 / Economics2 / Converting 59 Spur into Park, housing crisis drives socialism, and could...

Apologies for the delay between posts – I’ve had some busy travel recently. Before getting to this week’s items, a couple thoughts on the City’s consideration of turning the Bagby and Brazos portions of Spur 527 off 59 into a park. I live in Midtown, so this affects me directly. I’ve managed to adapt ok to losing the Brazos exit since the bridge closed for repairs – Louisiana is inconvenient but works – but losing Bagby’s southbound entrance is a bigger deal. I’ve thought quite a bit about this.  At first I was totally opposed, then I figured I could live with it via Smith and Louisiana but still moderately opposed (even with the benefits of Bagby traffic reduction). I do think it will substantially negatively affect some of the businesses along Bagby and Brazos that rely on drive-by traffic like Spec’s, CVS, and especially the new Midtown Whole Foods (which is already struggling in what was previously a food desert), as well as thousands of commuters that connect between 59 and 45 (which, in turn, will make the already-messy 59-45-288 interchange even worse). In fact, I’d argue the optics look pretty bad: sacrifice the commutes of a lot of working-class folks on the north and east sides commuting to jobs in the southwest so a few wealthy white people in gated Courtlandt Place can have a pocket park. Not a good look. And I think it is very likely that a City-maintained linear pocket park will turn into a homeless camp (sad, but that’s the reality these days) – something I hope the neighbors have considered in their support.  They may come to really regret it… 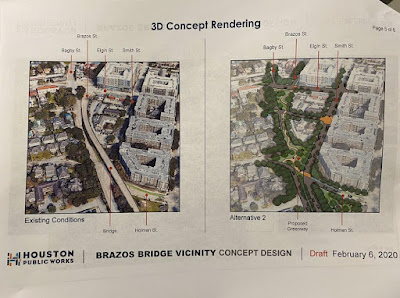 On to this week’s items:

“If we keep forcing them to pay for housing and parks, they will go to Houston or Austin.”

I think the advantages for a Google office here would be pretty strong. Tons of oil-and-gas tech talent that’s easy to poach, a city willing to do anything to land them, plus deep expat communities from nations all over the world that could handle some global functions (esp. Latin America).  It would also work well if Google is considering any health care plays, with the world’s largest med center right down the way in the innovation corridor.

“New supply is one reason the median home price in Texas is currently $207,301, while in California, it’s nearly triple that, $605,280. California’s drought in new home production has been caused in part by land-use regulations and the state’s myriad environmental laws.

The California housing situation, on the other hand, is a multifaceted mess. Prices have skyrocketed. A new apartment in San Francisco costs an average of $700,000 to build—including materials, labor, and land—triple the cost of a decade ago. The average value of a home in Los Angeles County is $635,000—almost double the median price in Austin and nearly triple the median price in Dallas—and many neighborhoods have seen average prices more than double in the last decade. According to the United Way, one in three Californians, or 3.3 million families, don’t have incomes to meet their basic cost of living, and most struggle with high housing costs. The state’s 150,000 homeless residents represent a quarter of the nation’s homeless population. The nonpartisan Legislative Analyst’s Office estimates it would cost “in excess of $250 billion” to provide affordable housing for all of the state’s 1.7 million rent-burdened households.”

Finally, watch this if you can.  “No Passport Required” on PBS did an episode on West African food and culture in Houston, and it is absolutely fascinating. Will make you proud of our city. Links to Houstonia and Houston Eater stories

“When I came to Houston I did not know what to think. Leaving, I see the future.” – Marcus Samuelsson, PBS “No Passport Required”

Photo credit: The Pancake of Heaven! via Wikimedia under CC 4.0 License

To The Economist: Planning, Not Home Ownership, Caused the Housing Crisis