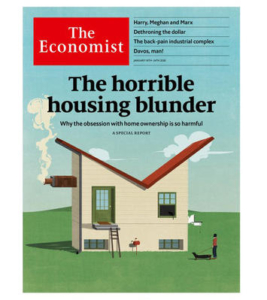 This Policy Brief by Wendell Cox, Senior Fellow of the Center for Opportunity Urbanism responds to The Economist cover story on home ownership as a key factor in the housing crisis.

An excerpt is below, with a link to download the full report.

“The soaring cost of housing has created gaping inequalities and inflamed both generational and geographical divides. In 1990 a generation of baby-boomers, with a median age of 35, owned a third of America’s real estate by value. In 2019 a similarly sized cohort of millennials, aged 31, owned just 4%.”

The Economist further notes that the rising wealth and income inequality identified by economist Thomas Piketty are explained by “growing returns on housing,” which Northwestern University economist Matthew Rognlie says are “almost entirely driven by housing.”

The Economist is not alone in this concern. In a recent report (Under Pressure: The Squeezed Middle-Class), the Organization for Economic Cooperation and Development (OECD) finds that the middle-class is under threat in many nations. OECD says of the middle-class that “there are now signs that this bedrock of our democracies and economic growth is not as stable as in the past.” The threat is indicated by the fact that costs of living are rising much faster than incomes. OECD places much of the blame on “house prices have been growing three times faster than household median income over the last two decades.”

The extent to which middle-class bedrock is being undermined is indicated by The Economist’s conclusion that “Young people’s view that housing is out of reach—unless you have rich parents—helps explain their drift towards “millennial socialism”.

These concerns are understandable. Unlike previous generations, younger people, do not believe their futures will be better than that of their parents, which Harvard economist Benjamin Friedman has shown is necessary for people to believe they can “get ahead.” In many markets they have little or no prospect of home ownership. Pointing to the demonstrated failures and hopelessness of socialism is of little solace to those most victimized by the middle-income economic crisis.