You are here: Home1 / Housing2 / To The Economist: Planning, Not Home Ownership, Caused the Housing Cri...

“The soaring cost of housing has created gaping inequalities and inflamed both generational and geographical divides. In 1990 a generation of baby-boomers, with a median age of 35, owned a third of America’s real estate by value. In 2019 a similarly sized cohort of millennials, aged 31, owned just 4%.”

The Economist further notes that the rising wealth and income inequality identified by economist Thomas Piketty are explained by “growing returns on housing,” which Northwestern University economist Matthew Rognlie says are “almost entirely driven by housing.”

The Economist is not alone in this concern. In a recent report (Under Pressure: The Squeezed Middle-Class), the Organization for Economic Cooperation and Development (OECD) finds that the middle-class is under threat in many nations. OECD says of the middle-class that “there are now signs that this bedrock of our democracies and economic growth is not as stable as in the past.” The threat is indicated by the fact that costs of living are rising much faster than incomes. OECD places much of the blame on “house prices have been growing three times faster than household median income over the last two decades.”

The extent to which middle-class bedrock is being undermined is indicated by The Economist’s conclusion that “Young people’s view that housing is out of reach—unless you have rich parents—helps explain their drift towards “millennial socialism”.

These concerns are understandable. Unlike previous generations, younger people, do not believe their futures will be better than that of their parents, which Harvard economist Benjamin Friedman has shown is necessary for people to believe they can “get ahead.” In many markets they have little or no prospect of home ownership. Pointing to the demonstrated failures and hopelessness of socialism is of little solace to those most victimized by the middle-income economic crisis.

The Economist concludes: “…housing policies have made the system unsafe, inefficient and unfair. Time to teardown this rotten edifice and build a new housing market that works.”

The Economist describes the process by which housing affordability deteriorates: “the long-term rise in house prices is largely down to constrained supply.” While acknowledging the role of increased demand (such as from global capital or loosened lending standards), The Economist indicates “a given increase in demand is largely channeled into price rises” where constraints (principally planning) restrain building enough new houses. The problem is not excess demand, but rather insufficient supply barriers erected in disregard of economics.

Deterioration of Housing Affordability Since 1990

Until the early 1990s, housing markets worked quite well — middle income households could afford the median priced house, with the exception of a few metropolitan areas where particularly strong land use regulation had been adopted and in which housing had become severely unaffordable (such as Vancouver, Sydney and San Francisco). National and most metropolitan area house prices remained affordable and house price to income ratios in six nations were at or below 3.0 — house prices were three times annual household incomes. Since that time, urban containment (below) has been adopted in many metropolitan areas or strengthened and house prices have increased on steroids compared to household incomes, as The Economist and OECD relate.

In their rush to stop the spatial expansion of cities (pejoratively called “urban sprawl”) urban plans have imposed bans or serious constraints on new urban fringe housing. These “urban containment” policies typically include “urban growth boundaries,” “green belts,” and other strategies. As with any policy that seeks to regulate markets, there are consequences. Urban containment leads to a virtual “land embargo,” not unlike the oil embargoes that inflated gas prices in the 1970s. Land values per acre can be 10 times higher or more across urban growth boundaries — virtually across the road (Figure 1). Urban containment destroys the competitive land market, which Brookings Institution economist Anthony Downs said was so essential, by extinguishing supply, while demand continues unabated. 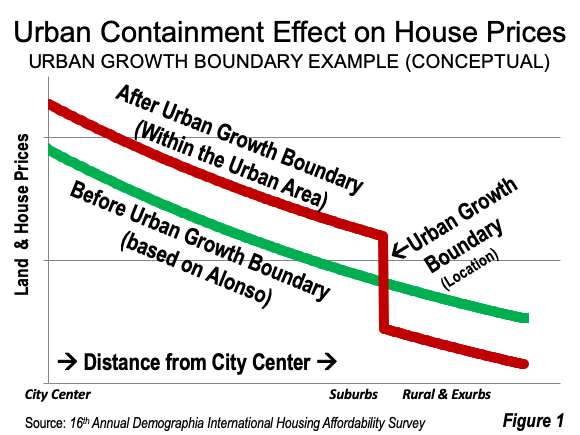 As a result, fewer households can afford homes, poverty increases and more households are added to subsidized housing waiting lists. Poverty, and so is the inequality that arises from excessive land use regulation.

The Economist recognizes the consequences of urban containment and said England’s huge green belts could accommodate 2.5 million new dwellings. Sufficient land beyond urban growth boundaries needs to be opened to housing to restore the competitive land market. Failing that, the chronic housing crisis is likely to continue and will probably worsen. 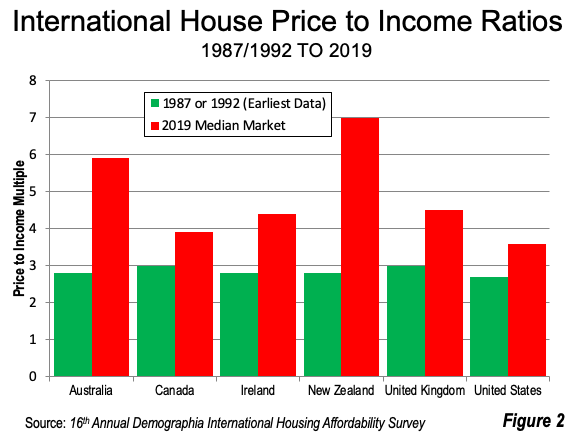 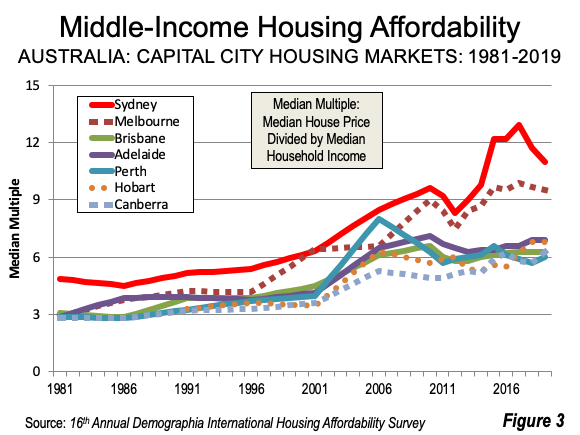 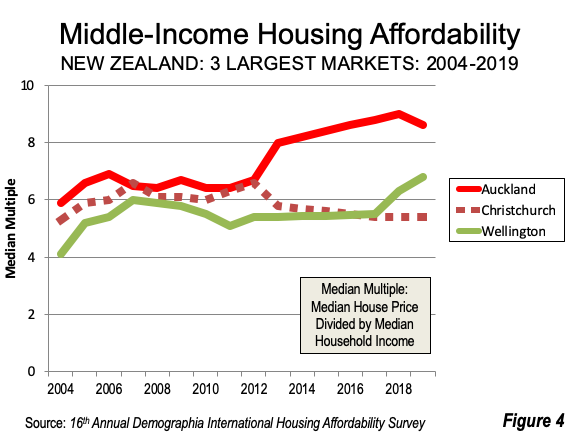 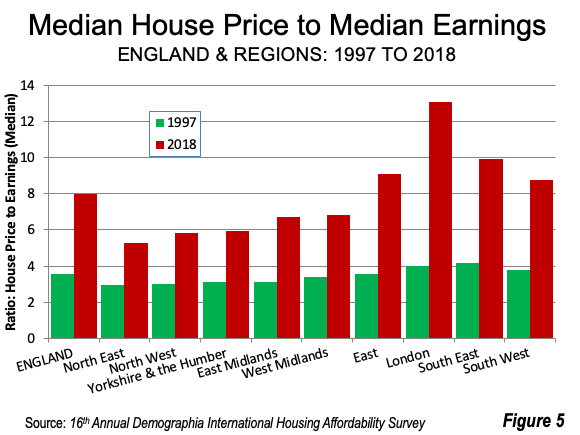 In the US and Canada, the price-to-income ratios have risen, but less, because many markets have retained more liberal regulation (Figures 6 and 7). 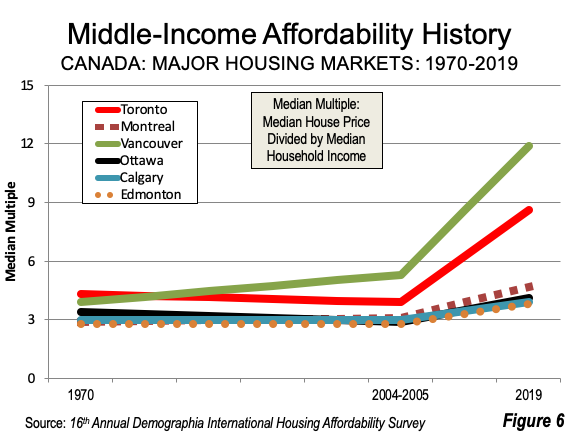 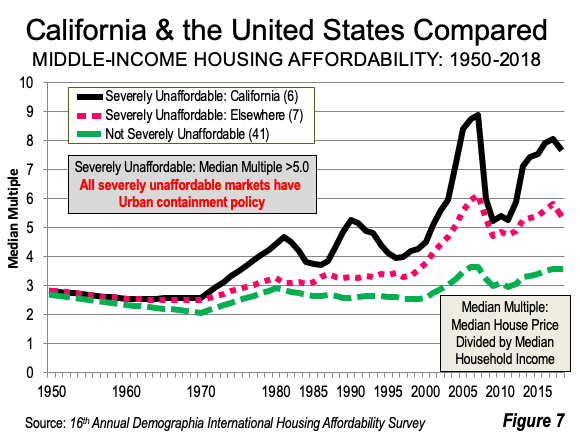 Having studied this issue for decades, I am yet to identify a case in which there was a full public discussion of these consequences. It might seem likely that elected officials inclined to support low-income housing affordability and middle-class affluence would have argued strongly against adoption. The housing affordability consequences were already clear in England in the early 1970s, in the early days of urban containment in California and Portland.

Meanwhile, many markets in the US and Canada remain much more affordable, and some are attracting net domestic migration from severely unaffordable markets.

Despite its provocative headline, The Economist does not call for an end to home ownership. Indeed, it has appropriate high praise for housing affordability in Singapore, which has genuine natural land constraints, as opposed the artificial urban growth boundaries around urban areas in regional plans elsewhere. In its 1964 Annual Report, the Housing and Development Board stated Singapore’s housing policy purpose: “…to encourage a property-owning democracy … and to enable … citizens in the lower middle-income group to own their own homes.” Singapore has delivered on that promise. Meanwhile, The Economist rightly suggests devolving taxes to lower governments to financially incentivize house building.

In his book, Order without Design: How Markets Shape Cities, former World Bank principal planner Alain Bertaud laments the virtual exclusion of economics from urban planning: “… the unfamiliarity with basic urban economic concepts by those in charge of managing cities is one of the major problems of our time.” He suggests that planning’s “systematic advocacy for constraining urban land supply results in inflated land prices, exacerbated housing shortages that particularly affect the poor.”

The Economist is right — it is “time to tear down this rotten edifice and build a new housing market that works.” Paul Cheshire, Max Nathan and Henry Overman of the London School of Economics supply the appropriate starting point, that “people rather than places” should be the focus of urban policy. Successful cities are evidenced not by their planning inputs, but rather by rising standards of living. Successful cities do not squeeze out the middle-class.