Like so many of us, Bret Stephens, an opinion columnist for The New York Times is stunned at the concentration of COVID-19 virus deaths in New York City, as well as the rest of the metropolitan area. In an April 25, 2019 article entitled “America Should Not Have to Play by New York Rules,” Stephens points out that the “number of Covid deaths per 100,000 residents in New York City (132) is more than 16 times what is in America’s next largest city, Los Angeles (8).”

Stephens says, “it isn’t hard to guess why,” going on to note “Commuters crowd trains, office workers crowd elevators, diners crowd restaurants. No other American city has the same kind of jammed pedestrian life as New York — Times Square alone gets 40 million visitors a year — or as many residents packed into high-rises.” This is the issue of “exposure density,” that we raised a couple of weeks ago. 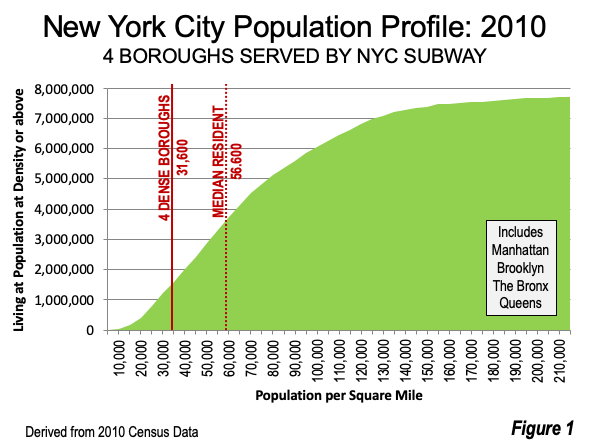 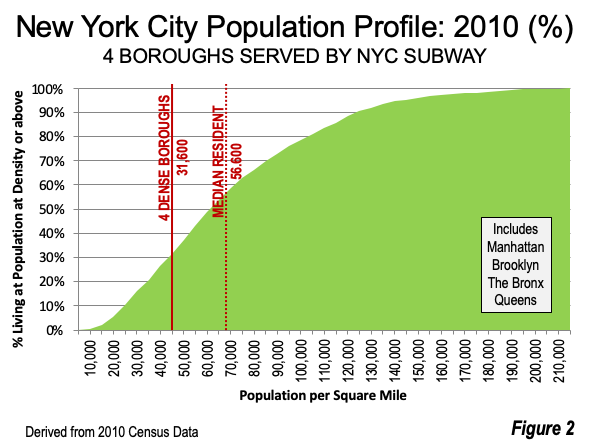 Particular attention has been brought to the subways by long time Massachusetts Institute of Technology (MIT) economics Professor Jeffrey E. Harris. Harris, who also has a medical degree, specializes in health economics and has a publishing record dating back decades, finds that “The parallel between the continued high ridership on MTA subways and the rapid, exponential surge in infections during the first two weeks of March at best supports the hypothesis that the subways played a role.” His more than adequately caveated working paper published by the National Bureau of Economic Research — “The Subways Seeded the Massive Coronavirus Epidemic in New York City, describes the association between subway ridership and New York City’s high infection rate.

Harris uses the example of commuter he calls “Milagros,” riding the Flushing Local line (Line 7), which runs from Hudson Yards in Manhattan to the Flushing Main Street Station.

Milagros’s exposure to coronavirus is not accurately gauged by the number of commuters who passed through the turnstile at her entry point at Junction Boulevard. That is because she will come into contact with potentially infectious passengers at each of the remaining 17 stops until she gets off at 34th Street–11th Avenue, which happens to be located in another coronavirus hotspot.

Harris further suggests four factors that increase the rate of infection on the subways.

He concludes that “an entire subway line, rather than the individual stations or subway cars, is the appropriate unit of analysis. (Figure 3)” 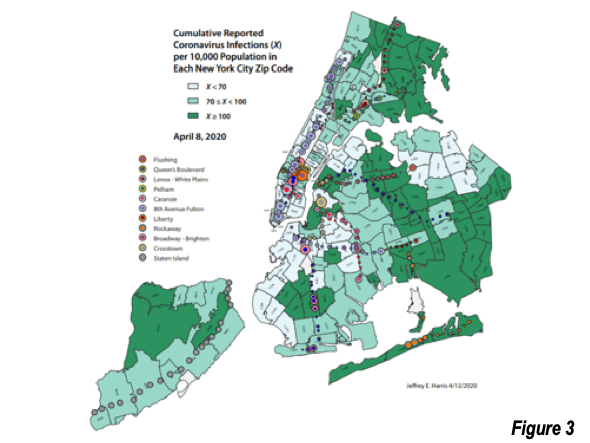 All of this has reaped substantial pushback, which is to be expected since New Yorkers generally like their city (as I do). One pundit went so far as to say that people should “absolutely not” avoid public transportation in New York, as if to suggest that social distancing is unnecessary.

However, even New York’s Mayor Bill DeBlasio is distancing himself from that kind of cheerleading, commenting that “Early on we said to people, if you don’t need to go on the subway, don’t; if you can work from home, work from home; if you can walk or bike or anything else, do so.”

Either the COVID-19 virus spreads in a manner that requires social distancing, or it does not. It is an Orwellian fantasy to think that social distancing can be maintained on a subway train.

Inconveniently for this point of view, according to the New York Post:

Gov. Andrew Cuomo provided frightening new details about the durability of the coronavirus — telling New Yorkers that the virus can linger in the air for up to three hours and survive for three days on plastic and steel surfaces commonly found on trains and buses.

Referring to the virus, Governor Cuomo said: “It can live on a pole in a bus or on a seat in a bus for up to 72 hours.”

There is More to the Story

At the same time, Harris points out that the subways are not the only cause: “We know that it would be inappropriate to require the subway hypothesis to explain every aspect of the diffusion of coronavirus.”

Obviously, the addition of the other factors makes things much worse. It is challenging to socially distance in New York City, with the interplay between population density, employment density, crowded commuting and crowded elevators, and just much more human interaction that intensify exposure densities. Social distancing is far easier in urban environments without the intense exposure density of New York City.

It should go without saying that evaluation of the COVID-19 spread needs to be objective. This means that it needs to include all potentially factors, even the most “politically correct”, such as density — especially the exposure density from how we live, work and get around.

The subways are an important part of this in New York City. As Harris notes, “We know that close contact in subways is fully consistent with the spread of coronavirus, either by inhalable droplets or residual fomites left on railings, pivoted grab handles, and those smooth, metallic, vertical poles that everyone shares.”

Meanwhile, the signs are ominous. Already, Capital Economics has suggested that we are entering the worst global recession since World War II and that the economy “will take years to return to its pre-virus path. ”Obviously, the human misery will be great, from job losses to home losses, greater poverty, personal anguish and increased rates of suicide. We need understand what happened and why.

Photograph: Long Island, Queens, with mid-town Manhattan and Central Park across the Ed Koch Queensboro (59th Street) Bridge and New Jersey beyond, across the Hudson River (by author). New York City’s Flushing Subway Line operates through Long Island City, tunneling under the East River, just south (to the left) of the bridge on the way to Grand Central Station and Hudson Yards.

Our Double Black Swan, Density vs. Pandemic, and More