Dallas-Fort Worth was the biggest gainer, adding 132,000 residents over the past year, to rise above 7.5 million for the first time. Phoenix and Houston gained between 90,000 and 100,000 residents, while Atlanta gained 76,000 (Figure 1). Detailed data is for all of the 106 metropolitan areas with more than 500,000 population is at the bottom of this article. 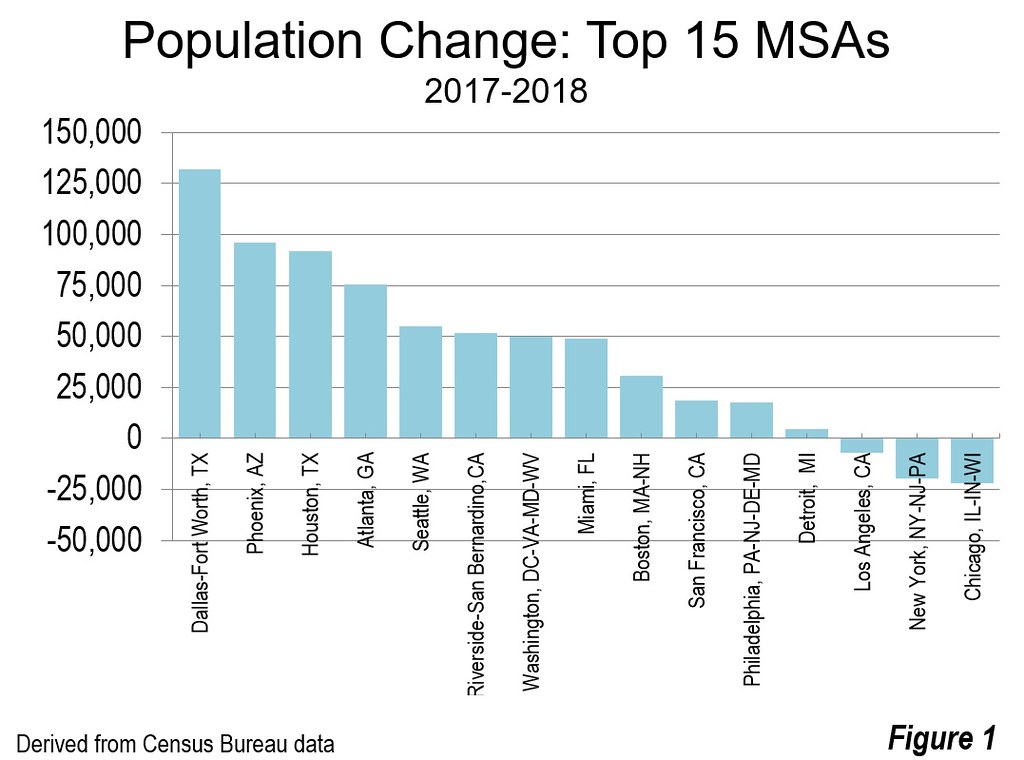 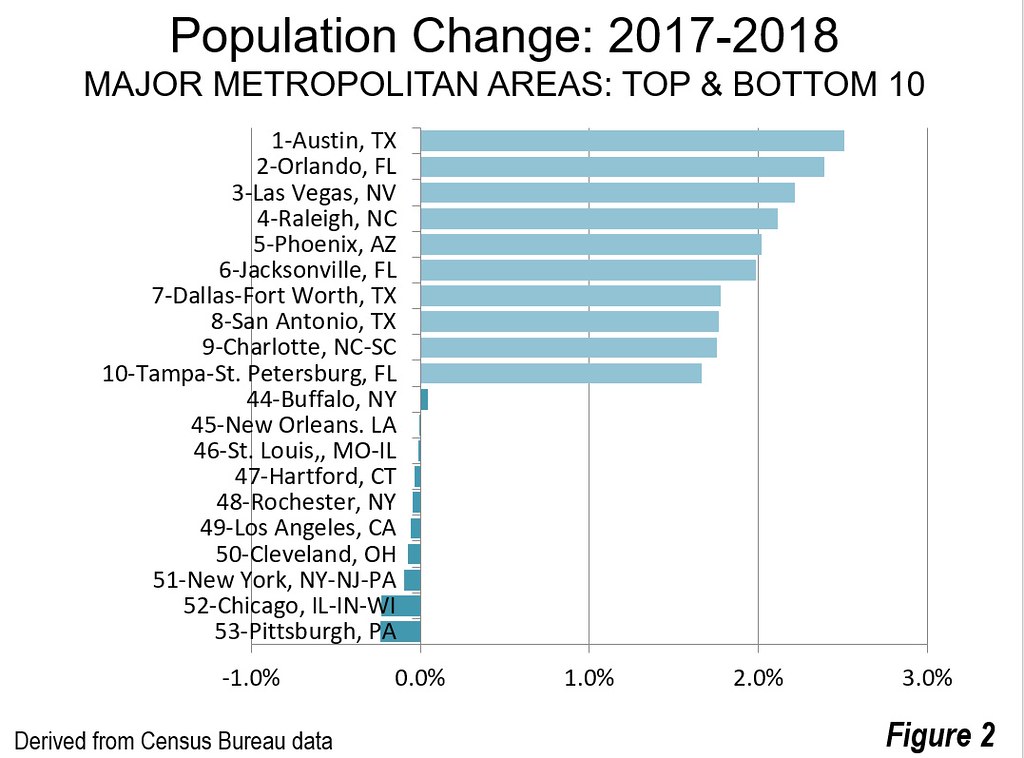 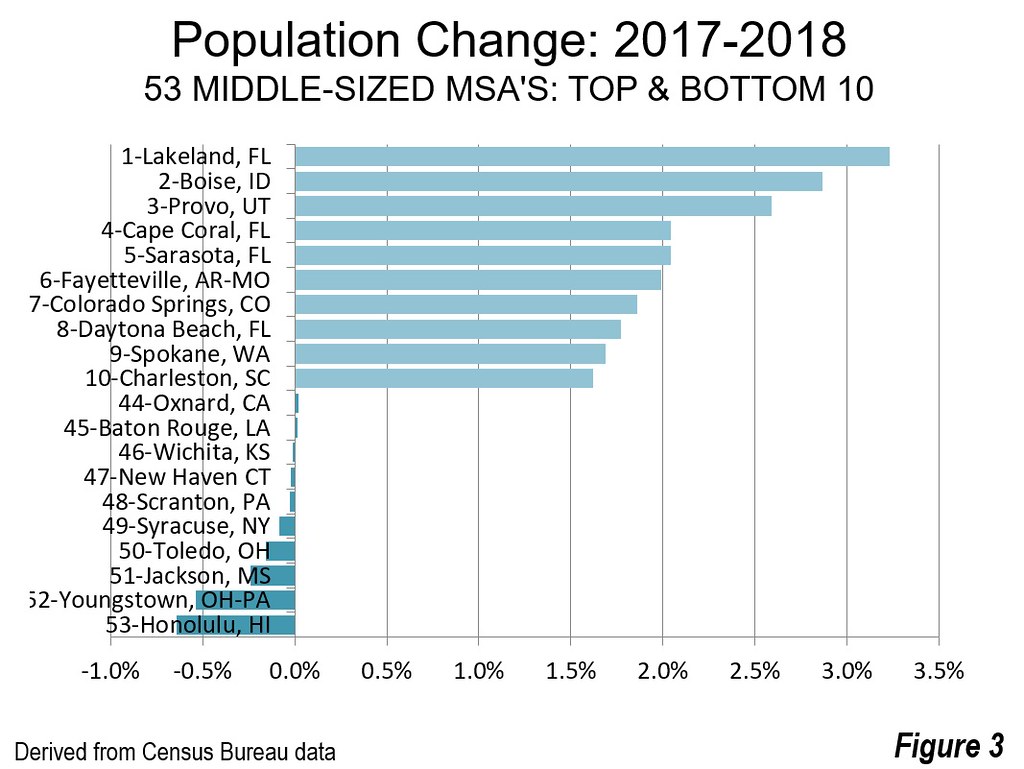 The strongest net domestic migration percentage gains among the major metropolitan areas were in Las Vegas, Austin, Jacksonville, Phoenix, Tampa-St. Petersburg and Charlotte, all exceeding a rate of one percent compared to 2017. San Jose, New York, Miami, Los Angeles and Chicago had the largest net domestic migration percentage losses, all exceeding a rate of minus 0.8 percent (Figure 4). 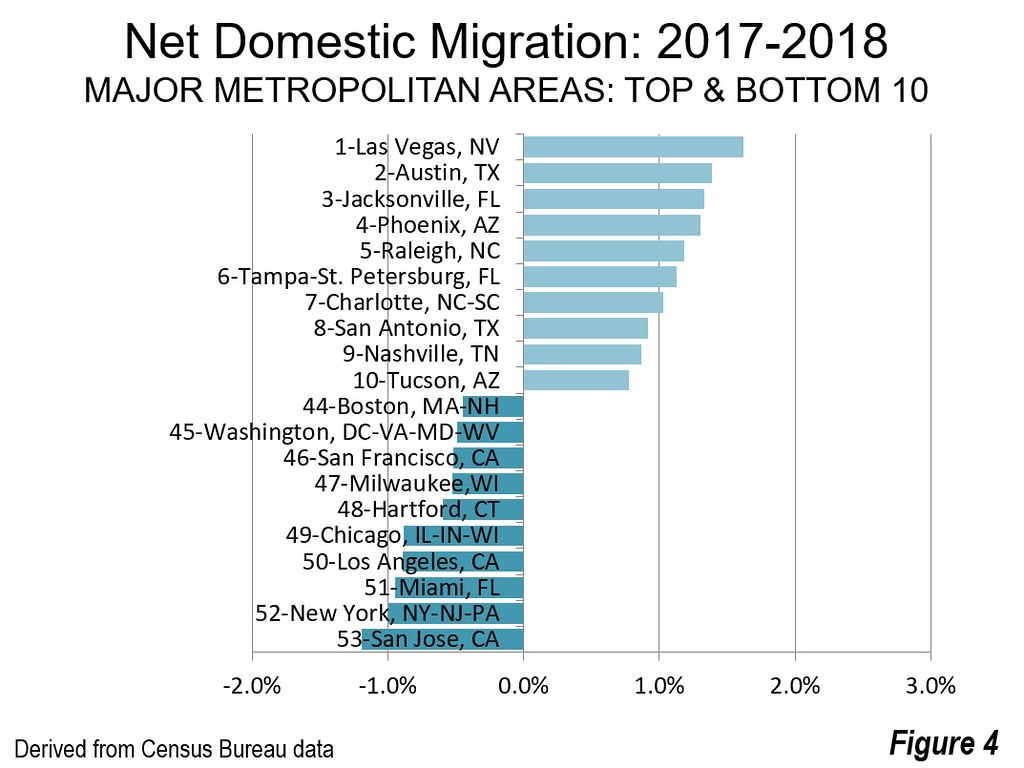 Among the middle-sized metropolitan areas, Lakeland, Boise and Sarasota (FL) had the largest percentage gains, all over 2 percent of their 2018 population. The largest net domestic migration percentage losses were in Honolulu, El Paso, Bridgeport-Stamford (CT), Jackson (MS) and New Haven (CT), all exceeding minus 0.5 percent (Figure 5). 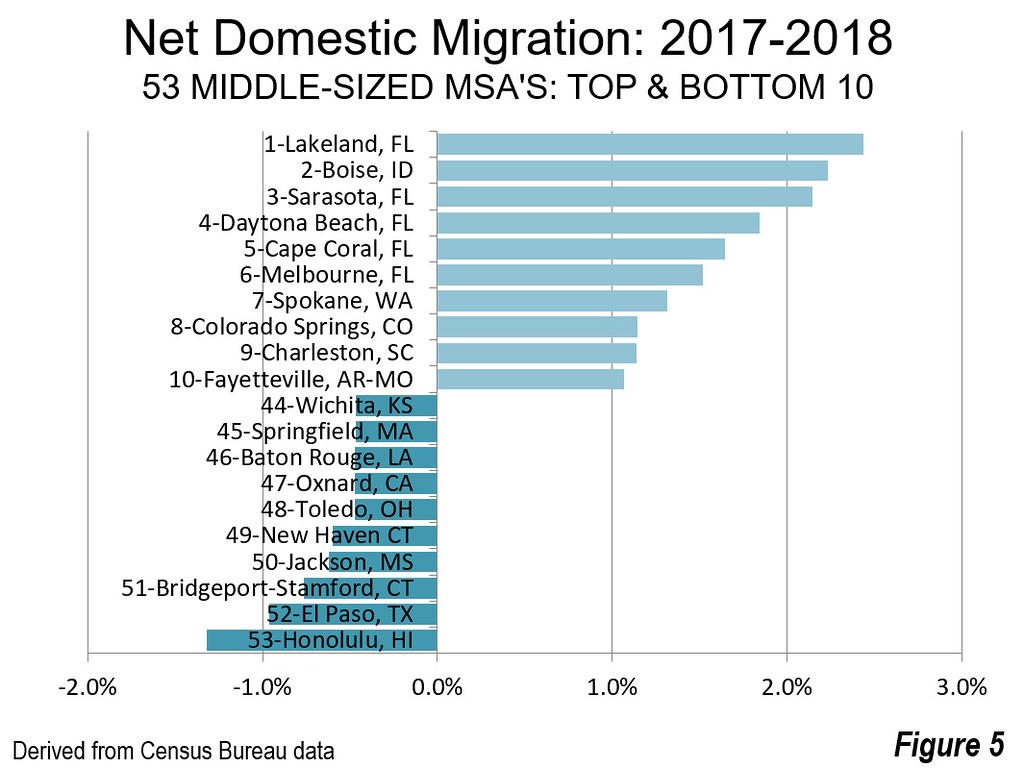 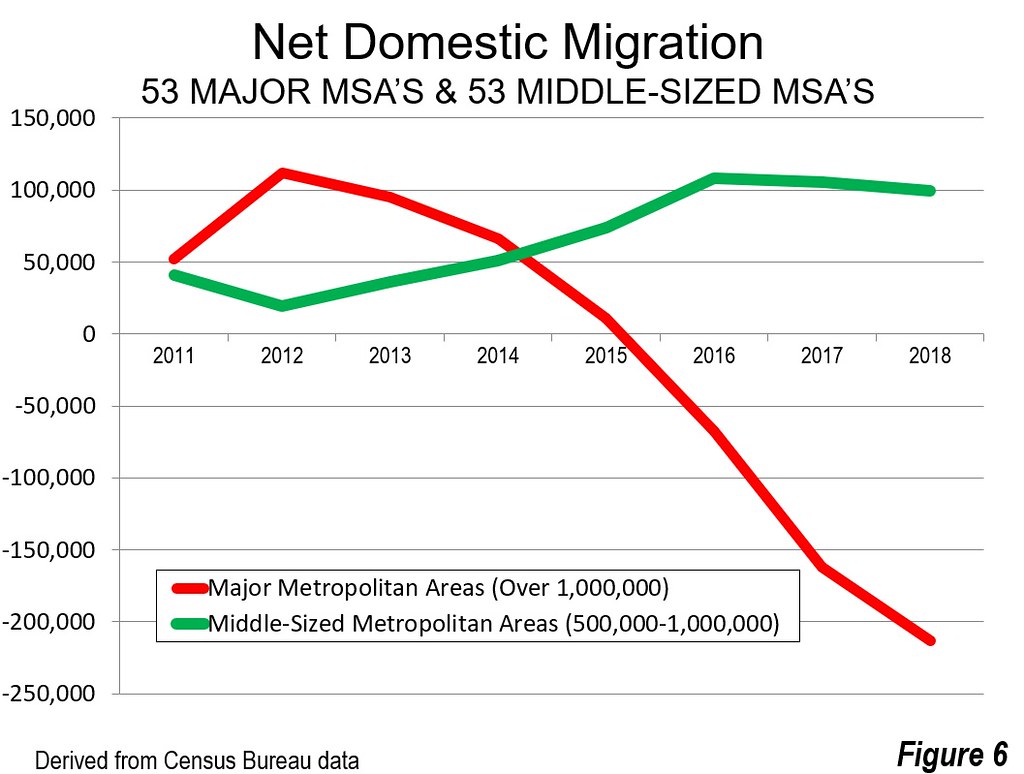 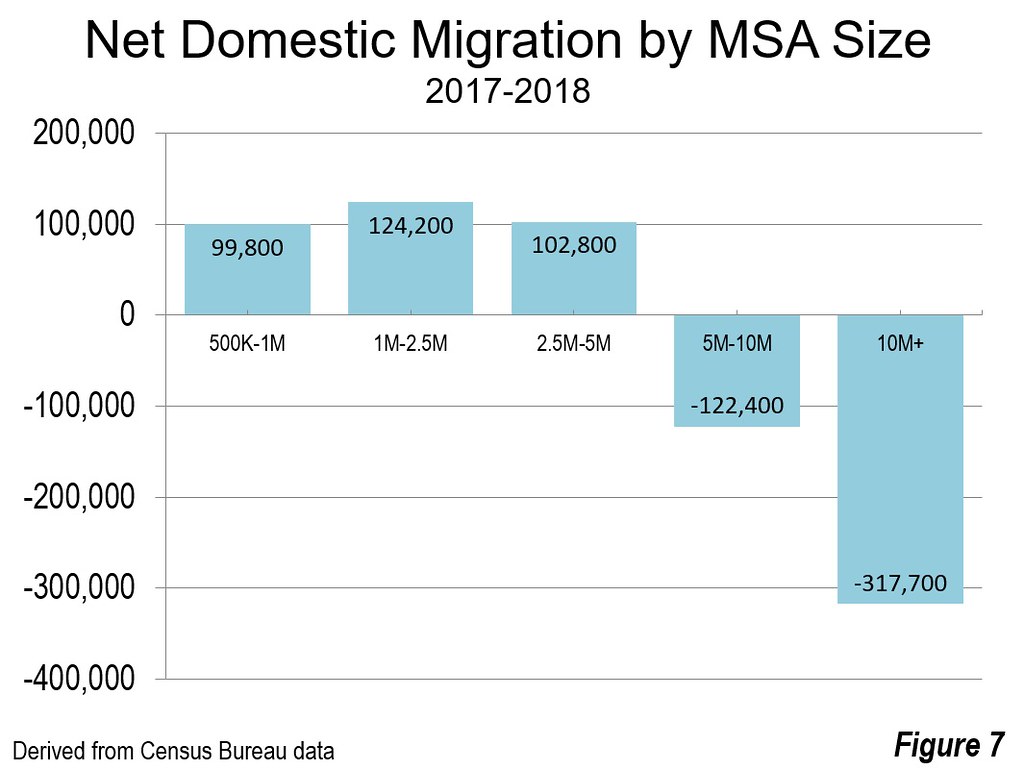 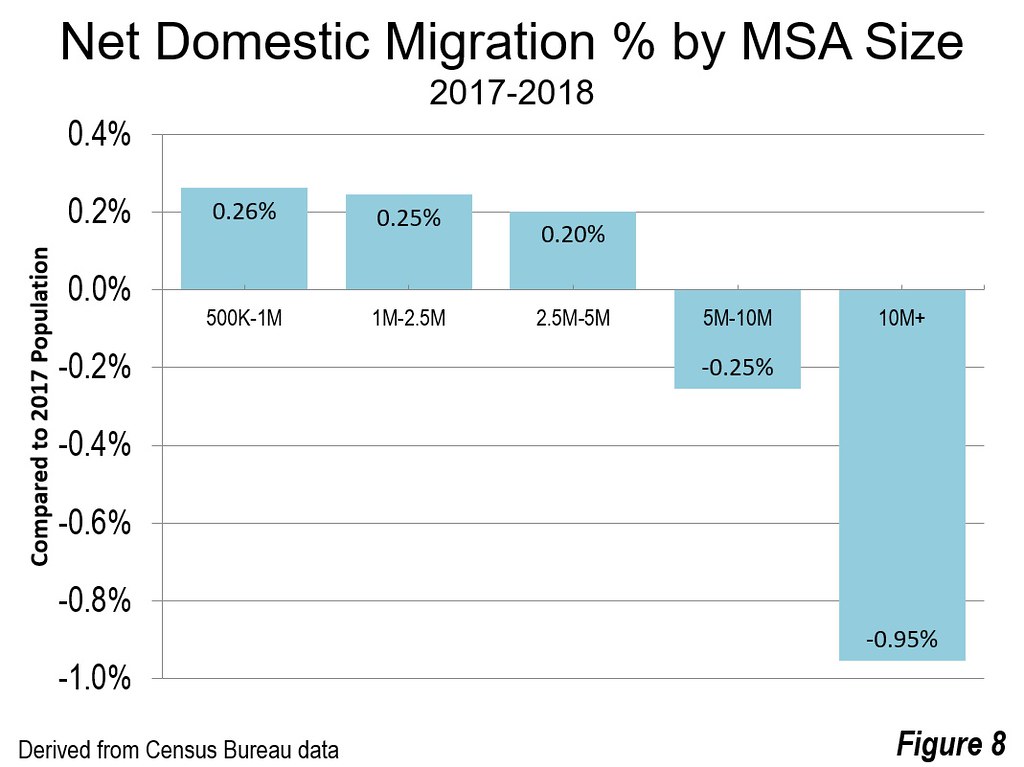 One of the enduring myths in recent years has been that urban core (Note 1) domestic migration exceeded that of the suburbs during or after the Great Recession. Figure 9 shows this to be untrue (as was also the case in the late 2000s). However urban cores certainly performed better than before during those difficult times. 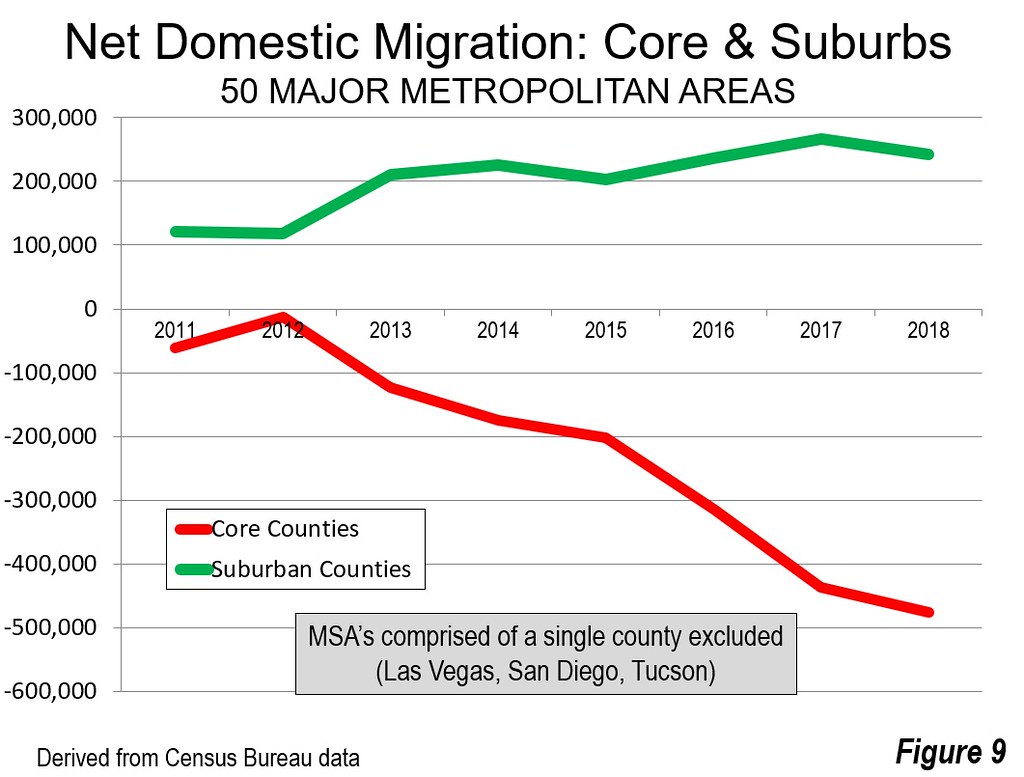 Figure 9 shows that the suburbs have done far better than the core counties in more recent years. In fact, for the last two years, suburban net domestic migration minus that of the core counties has exceeded 700,000, as is indicated in Figure 10 (Note). 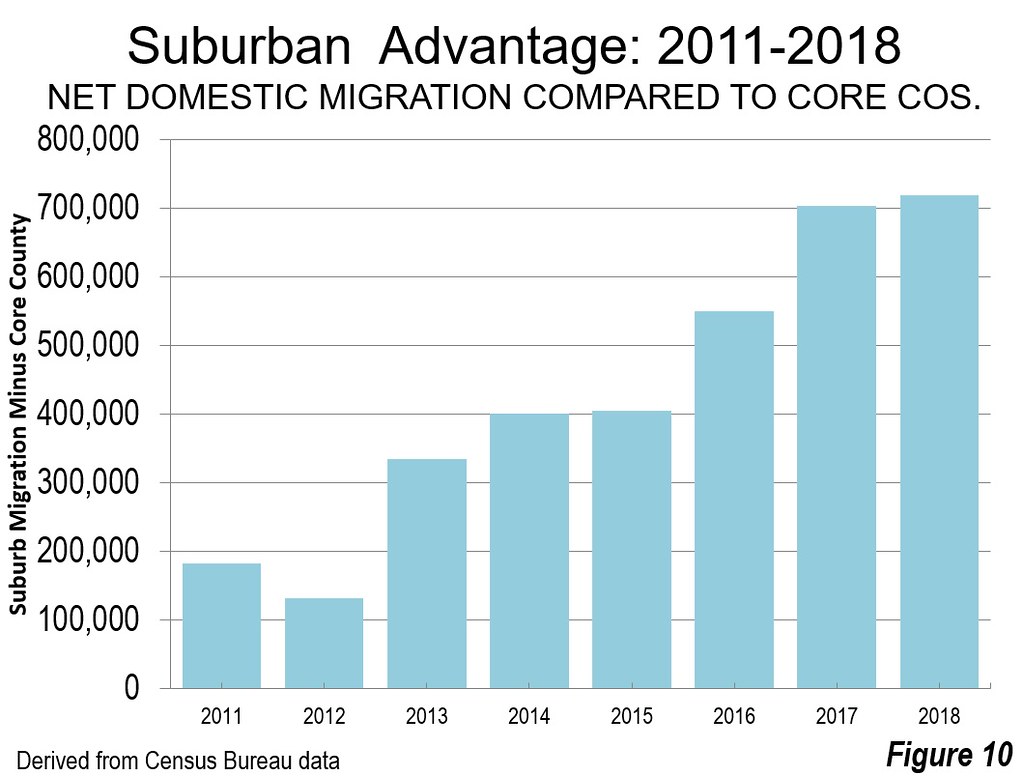 Much of what has been observed in recent years continues. People continue to migrate to the South and the Southwest, but not into California.

But the most recent data may portend even more important changes. It would have been inconceivable 10 years ago that Los Angeles, which was long, by some accounts, second only to Tokyo in population growth, to sustain a population loss. Chicago’s four years of losses are at odds with its modest growth that had been the rule for decades. New York, which now the Census Bureau estimates has lost population for the last two years, suffered had a large population loss in the 1970s, but had gains after that and as late as 2011 added more than 125,000 residents. Whether these losses will continue is, of course, unknown.

Finally, the growing net domestic migration trends in the middle-sized metropolitan trends could provide some strongly needed impetus to economies that have experience challenging times.

In sum, the new numbers show what has become the dominant trend of this decade: a shift to metropolitan areas that mainly have post-War suburbs, are affordable and and have lower costs. It’s time for city leaders to stop pretending there’s still a massive “return to the cities” and start addressing the reasons why so many of their residents are choosing to leave.

Note 1: The core county contains the city hall of the historical core municipality. There is one core county per metropolitan area, except in New York, where all five boroughs (counties) are classified as core counties. Counties are the lowest level of geography for which the Census Bureau estimates provide net domestic migration data.

Note 2: There were changes to the Census Bureau’s methodology, which are explained in this document. Previous year’s data can vary from amounts reported in earlier estimates. For example, the New York population loss was not reported in the 2017 release, but the data has been revised to show a 2017 loss in the 2018 release.

Homelessness in Hollywood
Scroll to top