The nation’s high-density central business districts of the major metropolitan areas have the largest shares of adults over the age of 25 with bachelor’s degrees or higher, which is consistent with popular perception. At the same time, because such a small percentage of people live in the central business districts, by far the most bachelors degree and higher adults live in the suburbs.

Overall data for the above 25 aged population is included as well as data for the four largest ethnicities, White Not Hispanic or Latino, African American, Asian and Hispanic or Latino. The data is the annual average for the five years of 2013 through 2017, which is from the American Community Survey 5-year data, which provides a statistically valid sample of the population for the nation at the small area level.

Overall, 35.6 percent of the population over 25 years of age has a four year degree or higher level of education (referred to as “college graduates” in this article). The balance of 64.4 percent have lower educational attainment (Figure 1). The City Sector Model Urban Core – Central Business District has the highest education attainment, with 66.1 percent of the population being college graduates. The Central Business Districts also have by far the highest population densities in the major metropolitan areas (Figure 2), more than double that of the Inner Ring and from nine to 17 times the densities of the Earlier and Later Suburbs. The Exurbs, which are overwhelmingly not urban (that is rural) have an even lower density. 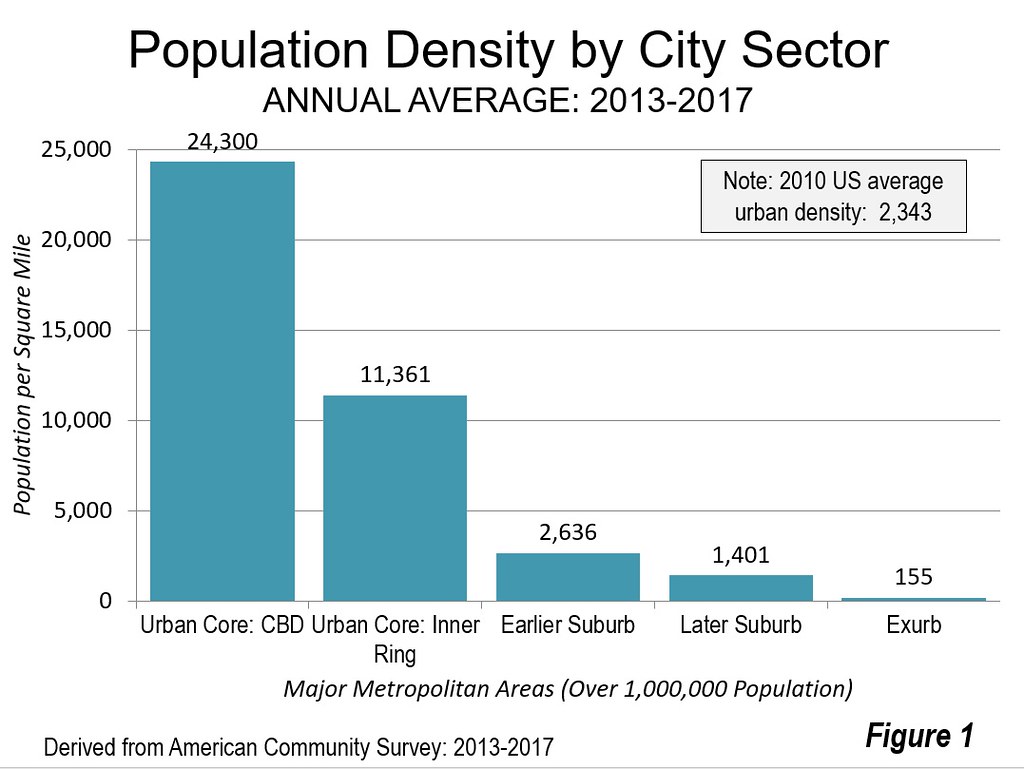 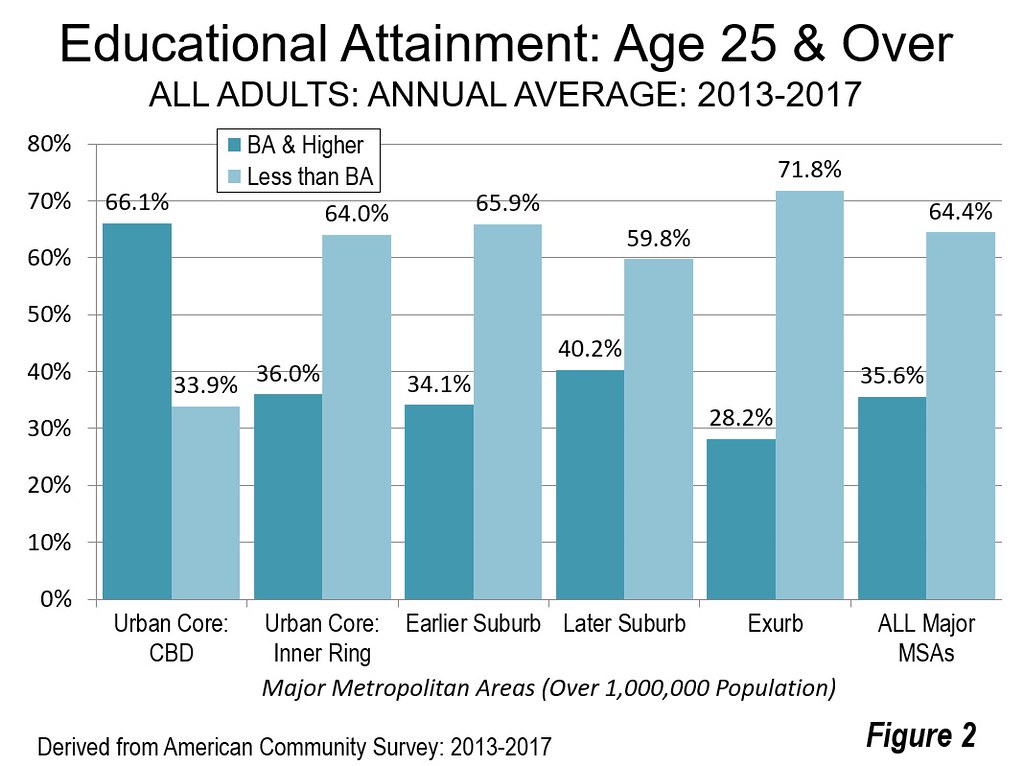 The balance of the urban core (Inner Ring) has a college education rate at about the national average, at 36.0 percent. The Earlier Suburbs have a rate of 34.1 percent, the Later Suburbs 40.2 percent and the Exurbs are the lowest, at 28.1 percent.

However, the Central Business Districts have only 2.7 percent of the major metropolitan area college graduates, by far the lowest percentage of any city sector. By far the most college graduates live in the suburbs, more than 25 times as many as in the CBDs. The Inner Ring college graduate share was 13.4 percent, five times that of the CBD, while the Exurban share nearly as high, at 12.9 percent (Figure 3). Among the five sectors, the highest number of college graduates was in the Earlier Suburbs. 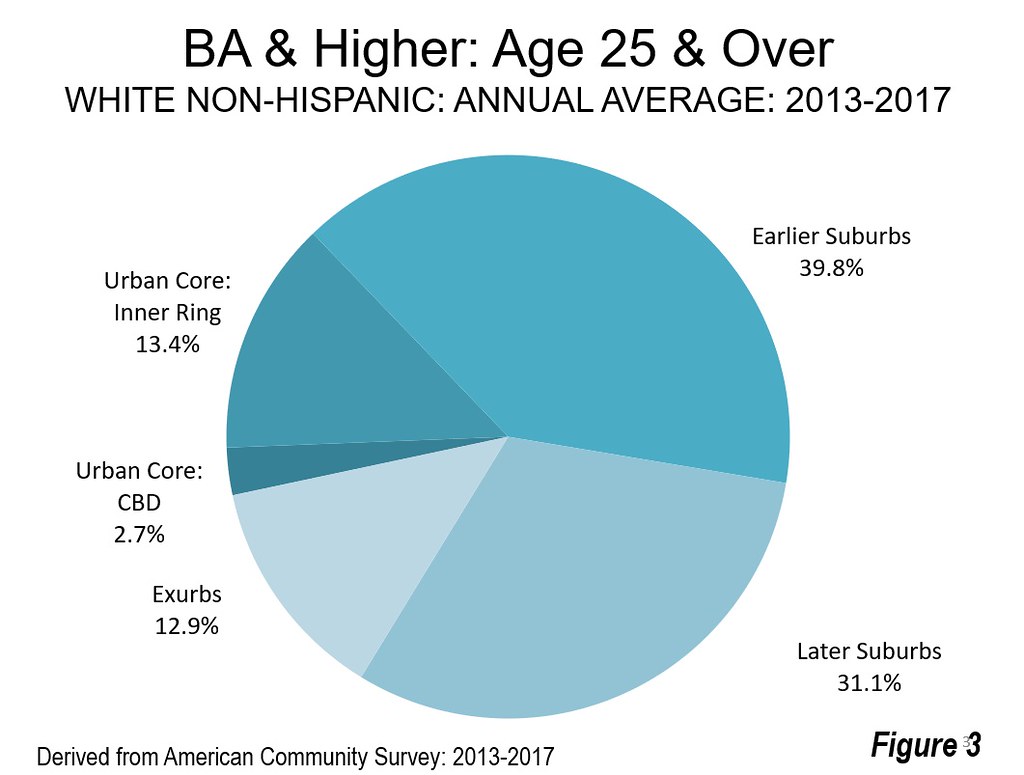 The distribution of college graduates among the four largest ethnicities is similar. 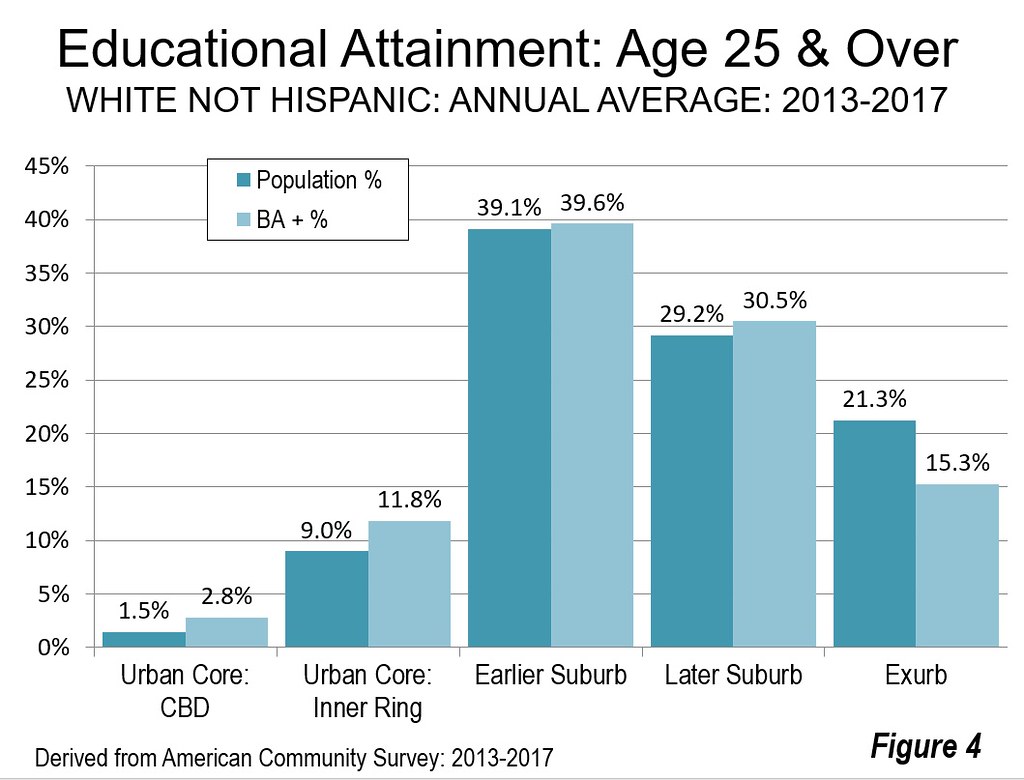 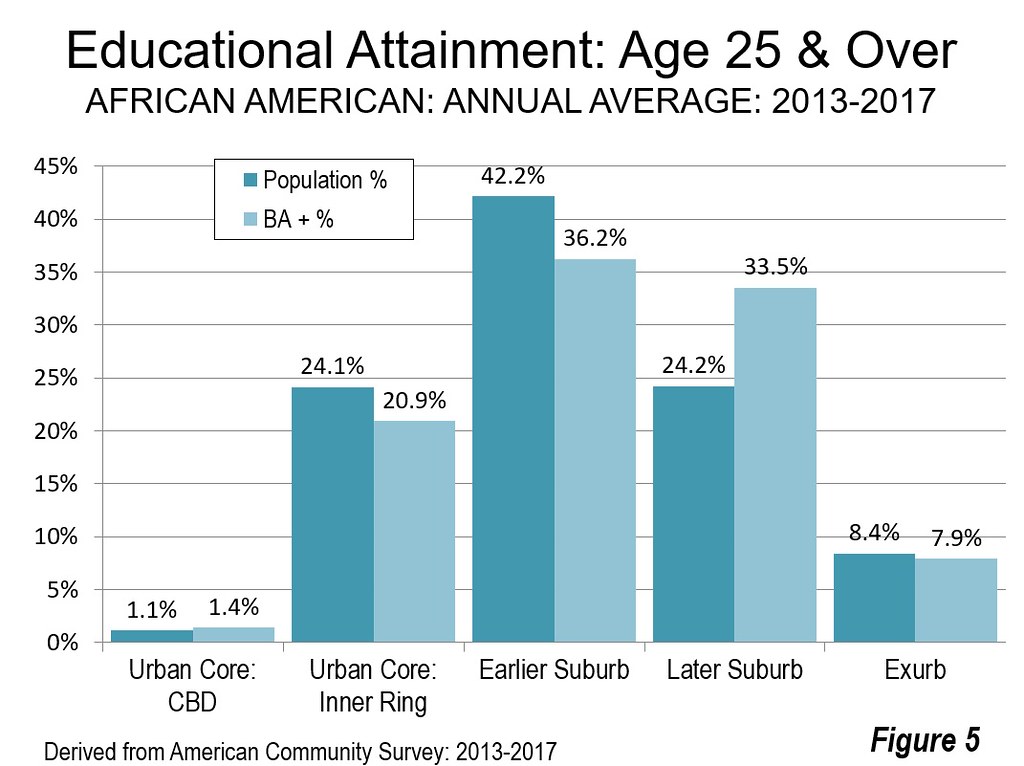 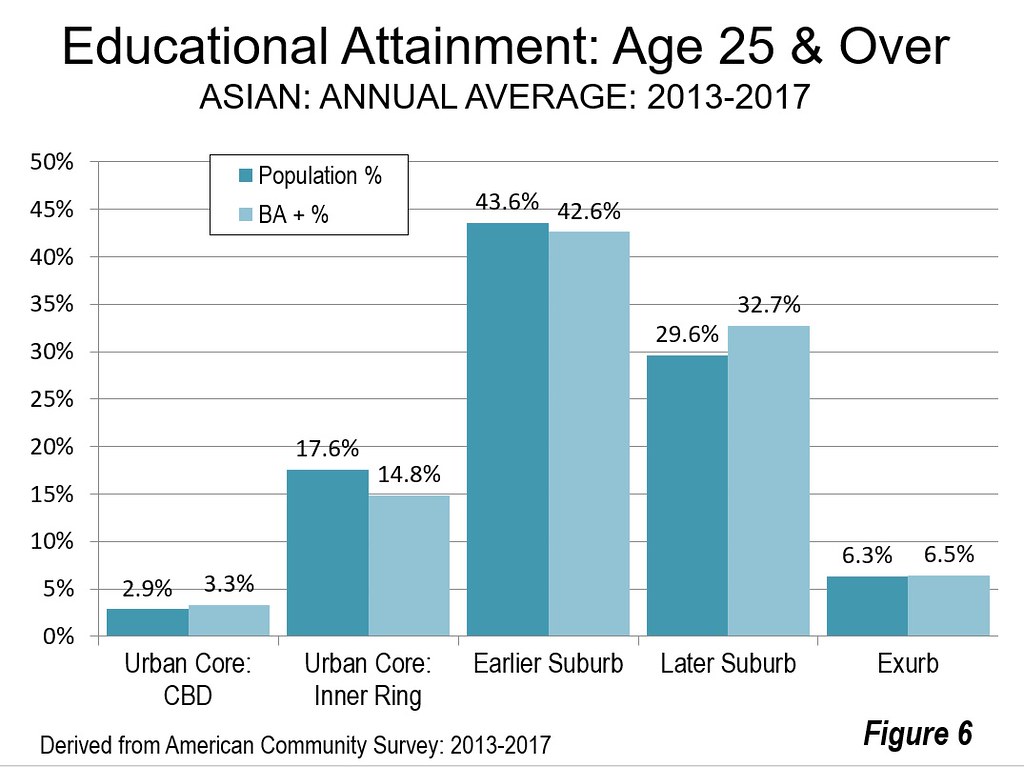 As in all but one other ethnicity, Hispanic or Latino residents in the CBD’s had the highest college education rates, at 35.4 percent. Only in the Later Suburbs were the rates within one-half of the CBD percentage (Table). However, the number of Hispanic or Latino college graduates (Figure 7) in the suburbs were nearly 30 times that of the CBDs (2.5 percent). 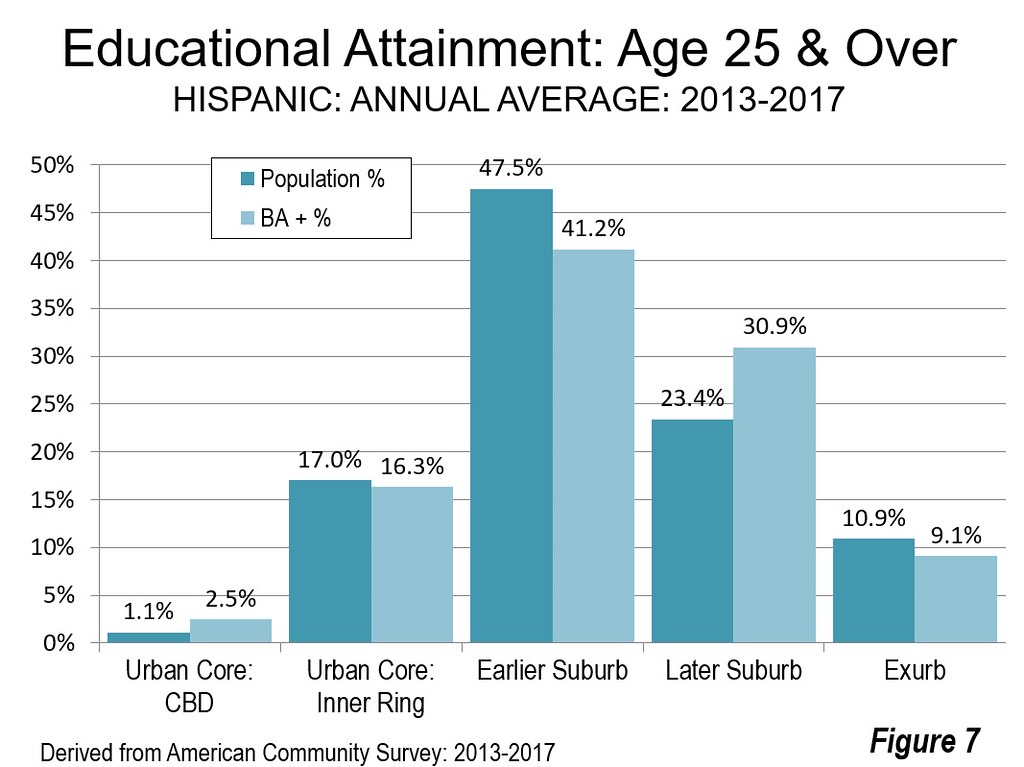 As Figure 8 shows, the total number of college graduates living in the suburbs from three to five times as high as in both of the urban core sectors (CBD and Inner Ring). Overall, the college graduate figure in the Exurbs is nearly as high as the urban core, and is higher among White Not Hispanics. The popular narrative of college graduates living in urban cores, especially the CBDs, surrounded by materially less well educated suburbs and exurbs is misleading.They may be more concentrated in the core, but the overwhelming majority lives in the suburbs and exurbs. 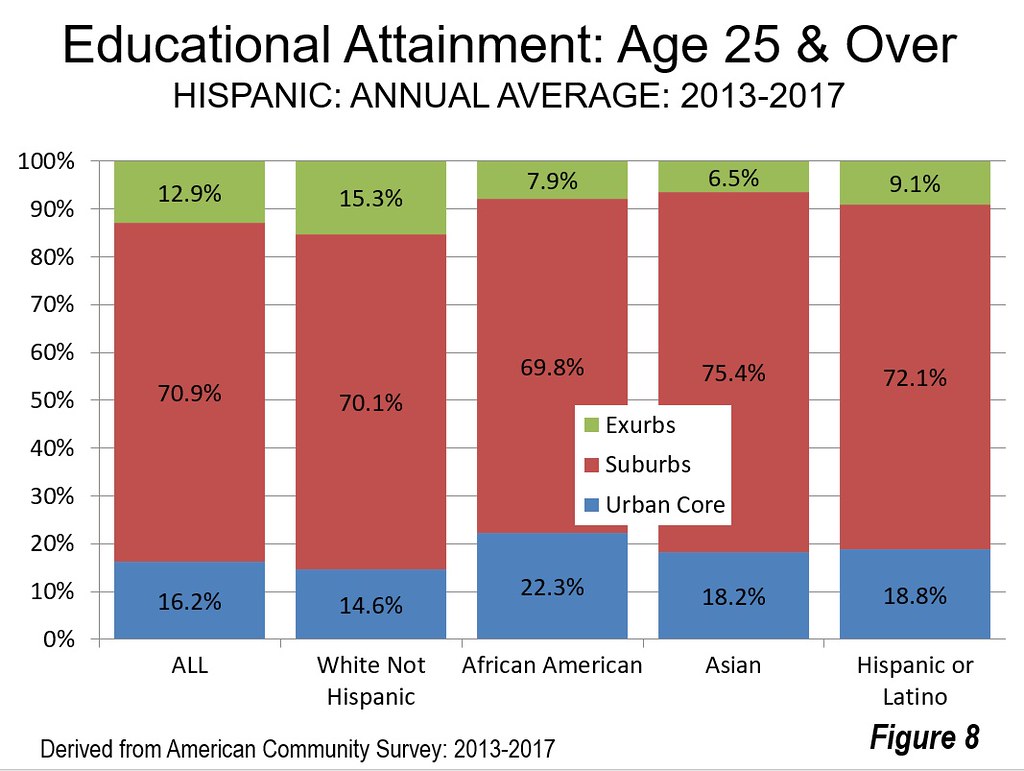 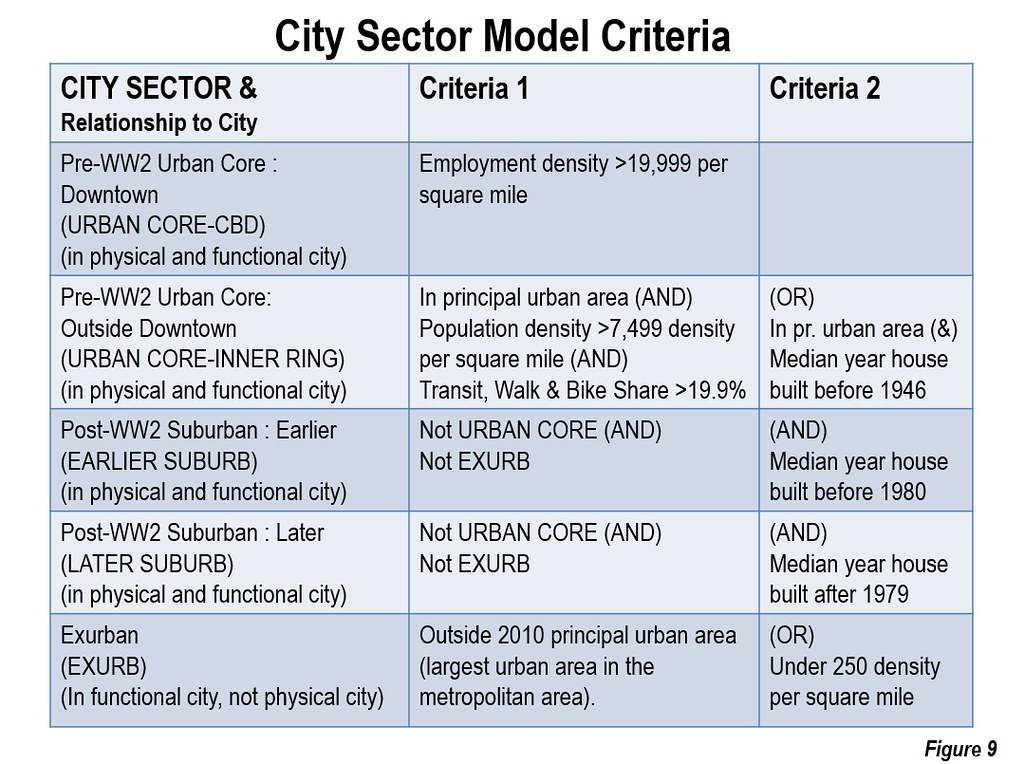 Note: The City Sector Model classifies small areas (ZIP codes, more formally, ZIP Code Tabulation Areas, or ZCTAs) in metropolitan areas in the nation based upon their function as urban cores, suburbs, or exurbs. The criteria used are generally employment and population densities and the extent of transit use versus car use (Figure 5). The purpose of the urban core sectors is to replicate, to the best extent possible, the urban form as it existed before World War II, when urban densities were much higher and a far larger percentage of urban travel was on mass transit. The suburban sectors replicate the automobile-oriented suburbanization that began in the 1920s and escalated strongly following World War II. The suburban areas are largely within the continuous built-up urban areas, while the exurban areas are generally in the metropolitan areas, but outside the built-up urban areas.