Happy new year everyone! Hope you all had a good holiday season and didn’t get caught up in the Southwest airlines chaos. Sadly, I accidentally wiped out all my backlog of post topics and blogspot does not have any recovery functionality (why can’t it keep history like Google Docs?!). So I’m combing back through my tweets to try to find at least some of them:

NYT: What Comes Next for the Most Empty Downtown in America (San Francisco). Long in-depth article. The last paragraph on Jenga is both ominous and amusing…

Richard Florida: “When I started with the creative class, places didn’t care about young people, they were only trying to attract a family with children to the lovely suburbs, and I’m saying, ‘No, no, no, no, no,’” Mr. Florida said in an interview. “Twenty years later, people forgot about the families. And now here’s a whole generation leaving cities again, for metropolitan or virtual suburbs.” …

“A few feet away from her, another group of young workers was playing Jenga. One by one, they took blocks away from the structure, making way for the inevitable collapse.”

NYT idiotically parrots the induced demand argument, including mentioning I10 and I45. Which type of infrastructure should government invest in: transit nobody will use, or lanes everybody will use? 🤔 Induced demand is a false argument. Nobody says “don’t build a new airport runway – it will just fill up with new flights” 🙄

WSJ: The Blue State Exodus Continues: “Texas and Florida make up about 15% of the U.S. population but accounted for 70% of its population growth this past year.”

Houston, Dallas-Fort Worth top the country in construction job gains

Houston ranks as the top market for tech job growth: “Although sometimes overshadowed by the cachet of Dallas, Austin, & San Antonio, Houston is absolutely a tech hub in its own right, attracting a mix of major tech companies & VC-backed startups + established base of aerospace, defense, & energy companies”

WSJ: California Long Ruled U.S. Shipping. Importers Are Drifting East. – Companies that depended on the West Coast as a point of entry for their goods are turning to other parts of the country as global trade gets upended. A chart inside shows Houston #1 in the country for port growth in containers. Looks like the port expansion is paying off! 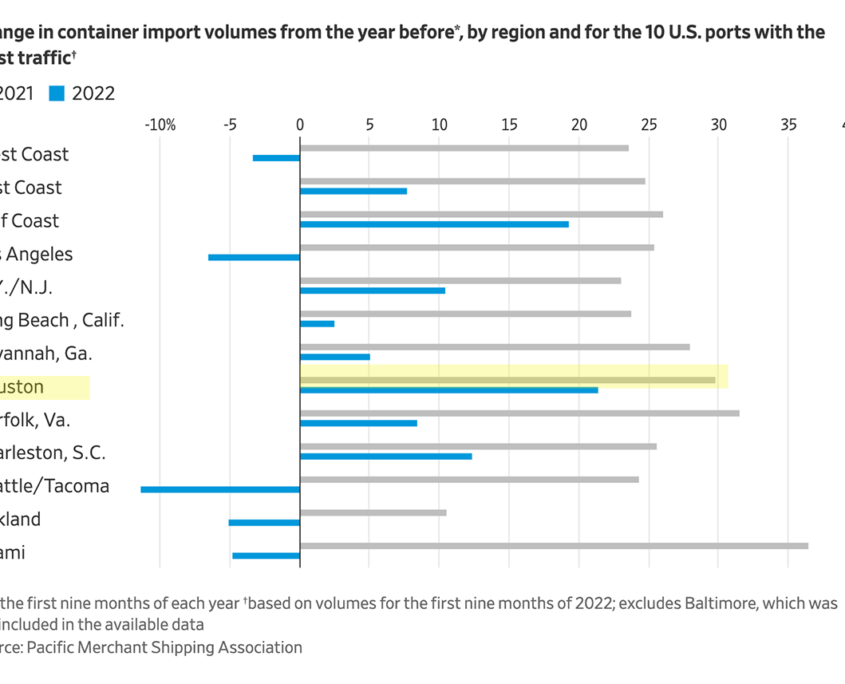 NYT: How a ‘Golden Era for Large Cities’ Might Be Turning Into an ‘Urban Doom Loop’. This is the most compelling reasoning I’ve read for why remote work is permanent:

“Bloom provided data showing strong economic incentives for both corporations and their employees to continue the work-from-home revolution if their jobs allow it:

Finally, I’ll end with this good short overview video on the Ike Dike


Tory Gattis is a Founding Senior Fellow with the Urban Reform Institute and co-authored the original study with noted urbanist Joel Kotkin and others, creating a city philosophy around upward social mobility for all citizens as an alternative to the popular smart growth, new urbanism, and creative class movements. He is also an editor of the Houston Strategies blog.
https://urbanreforminstitute.org/wp-content/uploads/2023/01/flood-barrier-htx.png 675 1200 Tory Gattis /wp-content/uploads/2020/03/URI-logo-claret.png Tory Gattis2023-01-10 13:47:122023-01-10 13:48:45Empty Downtowns, Blue-state Exodus Continues, and HTX Port Expansion

The Future of Cities
Scroll to top