Middle-income housing affordability is rated in four categories (Table ES-1)
Housing markets are metropolitan areas, which are also labor markets. In a well-functioning market, the median priced house should be affordable to a large portion of middle-income households, as was overwhelmingly the case a few decades ago.

Housing affordability for all 92 markets is shown by median multiple in Table 4 and by nation in Table 5 (following Section 5 in the report).

The Pandemic Demand Shock: The pandemic has driven an unprecedented deterioration in housing affordability. Many households have sought more living space (inside and outside) during the pandemic. This has resulted in a “demand shock” The demand for housing rose faster than could be readily supplied by developers and builders. 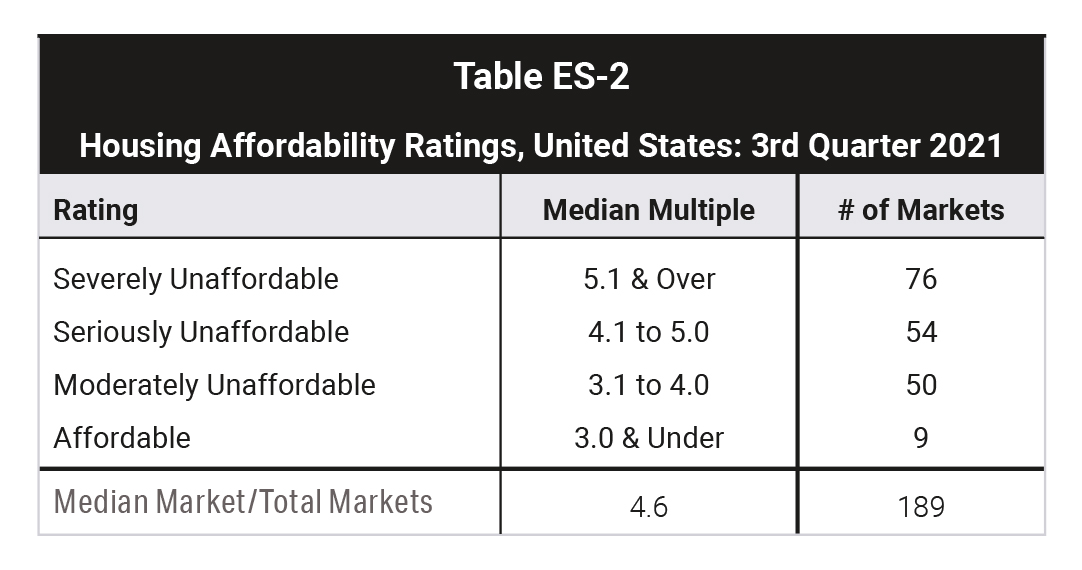 In the United States more than 85% of cost of living differences between high cost and average cost metropolitan areas are due to housing costs.

Academic research associates the declining housing affordability over recent decades with stronger land use regulation. In particular, urban containment regulation can produce substantially higher costs. In Rethinking Urban Sprawl: Moving Toward Sustainable Cities, OECD concludes that urban containment strategies (such as urban growth boundaries and greenbelts) must be accompanied by sufficient land for urban expansion to maintain housing affordability. This land needs to be competitively priced to keep house prices from rising disproportionately to incomes. In housing markets with the least affordable housing, urban containment policy is typical.

Housing Affordability and Inequality: French economist Thomas Piketty’s analysis has documented growing wealth inequality to the detriment of middle-income and lower income households. Other economists have found that much of this rising inequality is the result of inordinately increasing house values that have substantially retarded housing affordability. Reducing inequality requires material improvement in housing affordability . Policies should be adopted that restore the competitive market for land on the urban fringe and retain the competitive market where it remains robust.

The Death of Texas High-Speed Rail
Scroll to top