This week we have a great two-part guest post from Oscar Slotboom of Houston Freeways fame, starting with some fantastic news on an interconnected managed lane network for Houston!

The Houston Chronicle recently reported on initial planning for a comprehensive, interconnected managed lanes network for Houston (print edition pdf). Regular blog readers are aware that Tory and I have been promoting this concept – including the MaX lanes report we released in 2017 (blog post, report: lowres, highres) – which we believe could eventually support one million jobs in Houston’s core job centers.

A key feature of our proposal is the “Core MaX Central Connection Loop“, which is intended to connect all the MaX lanes and enable maximum accessibility to activity centers.  Using this loop, anyone coming in on any of Houston’s spoke MaX Lanes will be able to access any of the core job centers (blue circles are job centers with their total number of jobs). 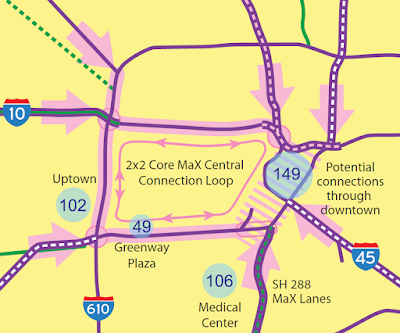 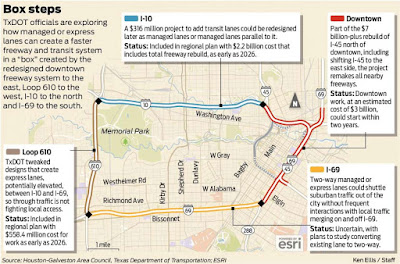 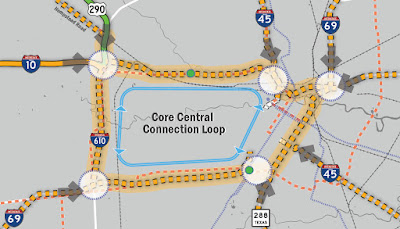 This is all very exciting! Let’s hope TxDOT and H-GAC can continue to move the planning process forward and identify the needed funding.

COVID-19 has reduced public transit ridership 62% nationally. The plot below show’s Metro ridership for the last year, with overall boardings down 56% between September 2019 and September 2020.(Metro data) 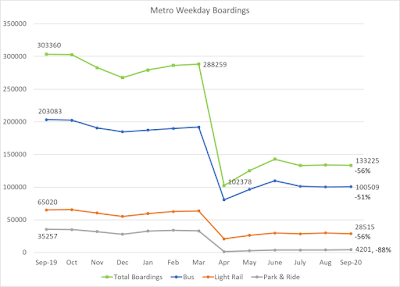 Park & Ride service has suffered the the most, down 88%. In the depths of the COVID shutdown in April, Park & Ride ridership dropped to 1090 daily trips, a 97% drop, before starting a very modest recovery. Of course, many Park & Ride customers are now working from home, and they have the option to drive to work to reduce their risk of exposure, and reduced traffic makes driving faster than pre-Covid trips. Buses mainly serve transit-dependent populations, and bus ridership shows the smallest percent loss.

Dallas has experienced a ridership drop of 57%, nearly identical to Houston. We probably won’t see a rebound in transit ridership until there is widespread vaccination and rush-hour traffic congestion returns to pre-covid levels. 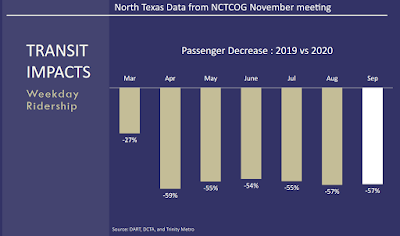 I could not find recent highway traffic data for Houston, but nationally highway traffic rebounded sharply during the summer and is now mostly reported to be between 90 and 100% of pre-covid levels. (1, 2). 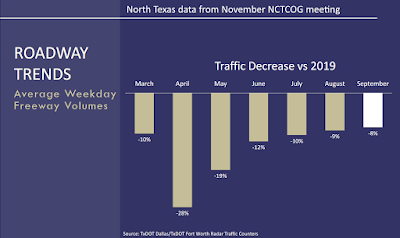 
Tory Gattis is a Founding Senior Fellow with the Center for Opportunity Urbanism and co-authored the original study with noted urbanist Joel Kotkin and others, creating a city philosophy around upward social mobility for all citizens as an alternative to the popular smart growth, new urbanism, and creative class movements. He is also an editor of the Houston Strategies blog.
https://urbanreforminstitute.org/wp-content/uploads/2020/09/houston-skyline-from-highway.jpg 675 1200 Tory Gattis /wp-content/uploads/2020/03/URI-logo-claret.png Tory Gattis2020-11-16 19:26:272022-10-05 11:35:01Planning Starts for Houston’s Managed Lanes Network, Plus COVID Impact on Metro Ridership