You are here: Home1 / Demographics2 / Combined Statistical Areas: Ready for the Dispersion Demand

The years to come seem likely to see America’s historic population dispersion continue or accelerate, as pandemic and lockdown worries have severely reduced the attractiveness of dense urban cores (especially in the highest density areas, such as New York City). As a result, the sparsely populated outer areas of combined statistical areas (CSAs), the largest category of local labor market defined by the Office of Management and Budget (OMB), could be the destination of many former urban core households.

This article examines the 105 largest labor markets (CSAs and uncombined metropolitan areas) with more than 500,000 population, as of 2019.

While CSA/MSAs have much of the nation’s population, they are far more rural than urban. All of the largest 105 have more rural than urban land (developed or built-up urban land). According to 2010 Census data, Overall, CSA/MSAs were 89.5% rural and only 11.5% urban (Figure 1). The rural and urban land is shown for the 10 largest CSAs in Figure 2. By comparison, 97% of the nation’s land area was rural and only 3.0% urban, according to the 2010 Census. 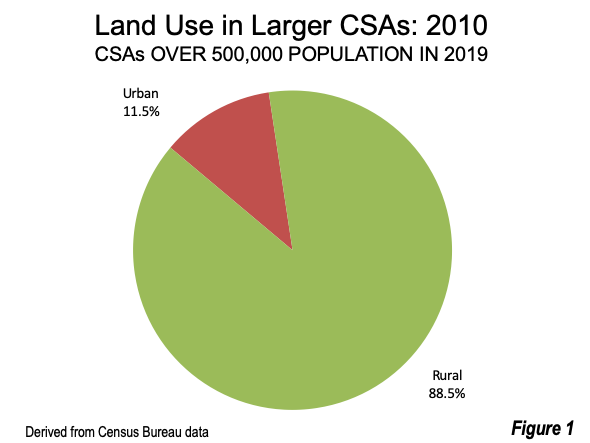 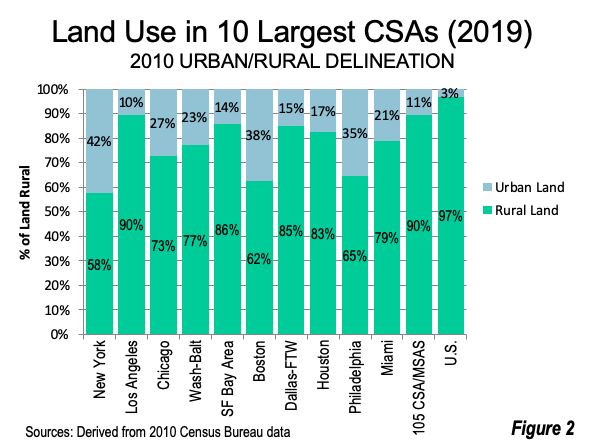 The 105 largest CSA/MSAs are shown in the Table at the end of the article, along with their populations and the extent of their rural land areas. The two largest CSA’s are above the 10 million criteria that defines megacities (New York and Los Angeles).

The New York CSA continues to be the largest. With 22.6 million residents, the New York CSA includes not only the New York MSA, but another seven metropolitan areas, extending more than 200 miles both north to south and east to west. Its 12,400 square mile land area is greater than that of 9 states.

Los Angeles is the second largest CSA, with 18.7 million residents. Its 34,000 square miles is nearly as large as Indiana. Yet, only 10% of its land area is urban.

Chicago ranks third, with 9.8 million residents. However, it is experiencing modest population losses and may not ever achieve megacity status unless further dispersion of commuting patterns includes additional counties in the CSA. The Chicago CSA has 27% of its land in urban uses.

Commuting patterns have changed considerably in response to efforts to control the spread of the COVID-19 virus. Stanford University research indicates that 42% of the workforce is now working from home, generally working on-line and participating in work activities by on-line meetings (such as “Zoom”). This is eight times the number of workers who reported working at home as their principal commuting mode in the 2018 American Community Survey (Figure 3). 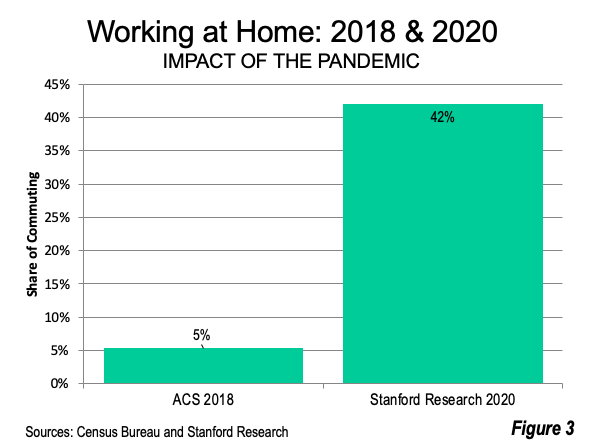 In the COVID-19 world and beyond, CSAs are likely to become more important. With the lockdowns of employment locations, millions of employees and many companies have found that employees can be at least as productive working on-line from home. Low density housing is now in much greater demand, as households seek to move away from denser areas, which have endured far more than their share of COVID-19 fatalities.

This has opened up a choice that many had not previously considered — telecommuting or commuting to work less frequently, perhaps once a week or even less frequent. A number of companies have taken steps to allow their employees to work at home.

The change in demand is obvious in the nation’s largest labor market, and the one with by far the highest urban core population and employment densities, New York. In such density, normal life and the economy are not sustainable with the social distancing and other policies necessary to control a pandemic that is spread person to person.

A “real estate frenzy” has been noted in Connecticut, New Jersey, Westchester County and Long Island, as City residents seek to move to where there is more space and less danger of infection. These areas could become prime attractors of Manhattan employees who want to avoid the crowded offices, crowded transit, crowded elevators and generally overcrowded situations that naturally accompany super-high population and employment densities. For these, an occasional train ride to Manhattan from Connecticut or New Jersey would make it possible to retain access to the City, while working principally from home offices in view of leafy lawns.

Similar choices would be available to people who work in other large metropolitan areas. For example, a Denver MSA worker can live and work from home in the CSA, whether in a small town, or even in the Rocky Mountains, and still be close enough to work in the office when necessary.

Workers can also live wherever they want and connect to work on-line virtually anywhere. A worker relocating to North Carolina’s western Appalachians could telecommute to Atlanta, Austin or any number of other places. Workers could to live near family, whether or not in scenic areas, and have virtually the same telecommuting opportunities.

CSA/MSAs are well positioned to serve the needs of the next wave of migrants from density to dispersion. Not only do they have vast amounts of rural land, but they also have low urban population densities. Among the 98 CSA/MSAs with more than a single county, 94 of 100 have urban densities of less than 2,500 per square mile.

The nation has plenty of room to accommodate households looking for sufficient space to minimize infections and reduce the economic consequences not only of this continuing pandemic, but also any that yet may come.

Back to Largest CSAs

This piece was first published on New Geography

Wendell Cox is principal of Demographia, an international public policy firm located in the St. Louis metropolitan area. He is a founding senior fellow at the Urban Reform Institute, Houston and a member of the Advisory Board of the Center for Demographics and Policy at Chapman University in Orange, California. He has served as a visiting professor at the Conservatoire National des Arts et Metiers in Paris. His principal interests are economics, poverty alleviation, demographics, urban policy and transport. He is co-author of the annual Demographia International Housing Affordability Survey and author of Demographia World Urban Areas.

Why Environmental Alarmism Hurts Us All With Mike Shellenberger