Still working through the backlog of smaller items – almost caught up! But first, if you’re looking for something new to read during this lockdown, I wanted to suggest a new book from Rice’s Stephen Klineberg: The Prophetic City – Houston on the Cusp of a Changing America, all about how we’ve evolved over recent decades through the lens of his annual Houston Area Survey. Houston Strategies and Houspitality get a mention! (you can search inside the book at Amazon)

“Physical distancing will cut transit capacity to 15-25% of normal, but use of PPE could increase capacity to 40%.”

“New Yorkers have been fleeing for months. But the fear some residents have of the violent reactions to the protests here is adding a new challenge to those asking themselves whether they can hack the city. Many are deciding not to return.

“It’s a decision that must be made individually and privately, one that some 420,000 New Yorkers with the resources to do so had already made between March and May in reaction to the pandemic, according to cellphone data analyzed by the Times.”

“For some, it’s a chance to be closer to family, which feels more urgent in the midst of a global health scare. For a large swath of people in the country’s most expensive cities, it’s a way to get more living space and be closer to nature, something increasingly made possible by the growing trend of remote work. And for many others it’s not really a decision at all, but a necessity in the face of growing job losses and still sky-high rents.

“…And people in cities hit hard by the pandemic — New York, San Francisco and Seattle — are searching for remote work opportunities significantly more than the rest of the country, LinkedIn data shows. Some real estate data suggests many are already considering or making a move to a smaller town or suburb. Real estate company Redfin said page views of homes in small towns more than doubled during the last week of April compared with last year.

“… She said she’s hearing from mostly young families — professionals with small children — who want to trade the confines of a locked down New York City for houses with home offices and yards.

“It’s no longer temporary. People are saying, ‘I’m not going back. This could happen again and we don’t know when it’s going to end,’” said Bernstein.

“New York doesn’t feel worth it anymore,” he said.

“Maybe soon-to-be-defunct Malls could offer satellite space with a food court.  Malls are changing, maybe there is a synergy there.”

“Houston and NYC both issued around 61k permits in 2019. But metro New York City is nearly 3 times bigger than metro Houston, meaning its construction activity in 2019 (30.4 permits per 10k residents) was much less than Houston’s (88.3 permits per 10k).” 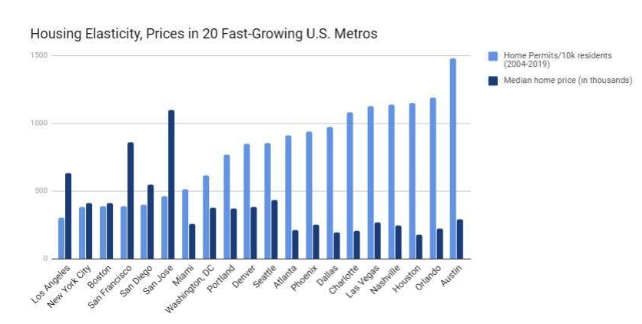 Finally, I wanted to end with a short video from the KAS Strong Cities 2030 project that I’ve been involved with the last couple of years.  They put together clips of how different cities are dealing with the Covid-19 crisis, including yours truly at the 1:49 point (albeit recorded a couple of months ago and a bit dated at this point).

From Tragedy to Opportunity: We Could Live Better When Today’s Mayhem...
Scroll to top