You are here: Home1 / Economics2 / Houston Most Affordable High-Growth Metro

I’ve got a long road trip coming up so posts may get infrequent for a while. This is my attempt to clear out as much of the backlog as possible before leaving:

“Texas is best understood as a place where the private sector prevails over the public sector. Among the 50 states, it ranks near the top in economic freedom, a measure of fiscal and regulatory policy, and near the bottom in overall tax burden. It’s a state known for building, with Dallas and Houston routinely among the top metros in new home permits and Austin first in the nation for permits per capita since 2004. But state and local government spending per capita is the 11th-lowest of any state, according to data from the Tax Policy Center….

More than data, though, it’s the feeling of what can be accomplished in a state that emphasizes freedom versus one strangled in red tape and high taxes. Houston ended veterans’ homelessness in part by cheaply building large supportive housing projects; California cities have spent billions fighting homelessness, but still have tent cities because it costs so much to build affordable housing there. Dallas has, over three decades, built the nation’s longest light-rail system, and a private company is planning high-speed rail between there and Houston. California metros have struggled to add capacity to their transit systems, and last year the state’s high-speed rail project lost federal funding due to ongoing delay. Perhaps most damning is an annual survey by Chief Executive magazine asking CEOs nationwide to rank state business climates. Texas has been first for 15 straight years, and California in last place for five.”

“Indeed, Houston’s infamous lack of zoning could end up being one of its greatest assets in pursuing climate goals. Without all of the anti-density baggage that comes with zoning — from apartment bans to an onerous approvals process — there is relatively little standing in the way of a rapidly densifying Houston and all of the environmental benefits it brings.”

“The best-performing newer systems in our database, such as Minneapolis, Seattle, and Houston, are all compact, serving urban areas near downtown. By contrast, larger light rail systems that stretch into low-density suburban areas tend to underperform….

Houston has taken a step in the right direction by abolishing parking minimums in the Downtown, Midtown, and East Midtown neighborhoods, all of which are served by light rail. …

In Houston, the cornerstone of a recently approved light rail system is a line to Hobby Airport through industrial and low-density residential areas, estimated to cost $167,000 per daily rider.

Another form of overexpansion comes from the tendency of light rail planners to overvalue airport service. It’s easier to form a broad political coalition for airport service than for run-of-the-mill transit improvements. City power brokers like to impress out-of-town visitors with airports, and suburban residents who do not use transit regularly imagine that a train for their occasional airport trips would be convenient.

Airport connectors, however, tend to perform poorly. Airports are usually in remote locations, so light rail to airports requires extensive capital construction; the slow speeds of light rail relative to freeways matter more for long-distance trips from airports to downtown. Moreover, businesses that surround airports, such as industrial suppliers and distribution centers, demand large amounts of land and are difficult to access on foot, making them low-value destinations for transit ridership. Finally, airport noise and pollution make the surrounding areas less desirable for the sort of redevelopment that might improve ridership.”

Finally, I wanted to end with one of my most popular tweets ever about walking through a random neighborhood near Midtown and boom – this awesomeness suddenly appears. Think a zoned city would allow this?! Gotta love Houston! 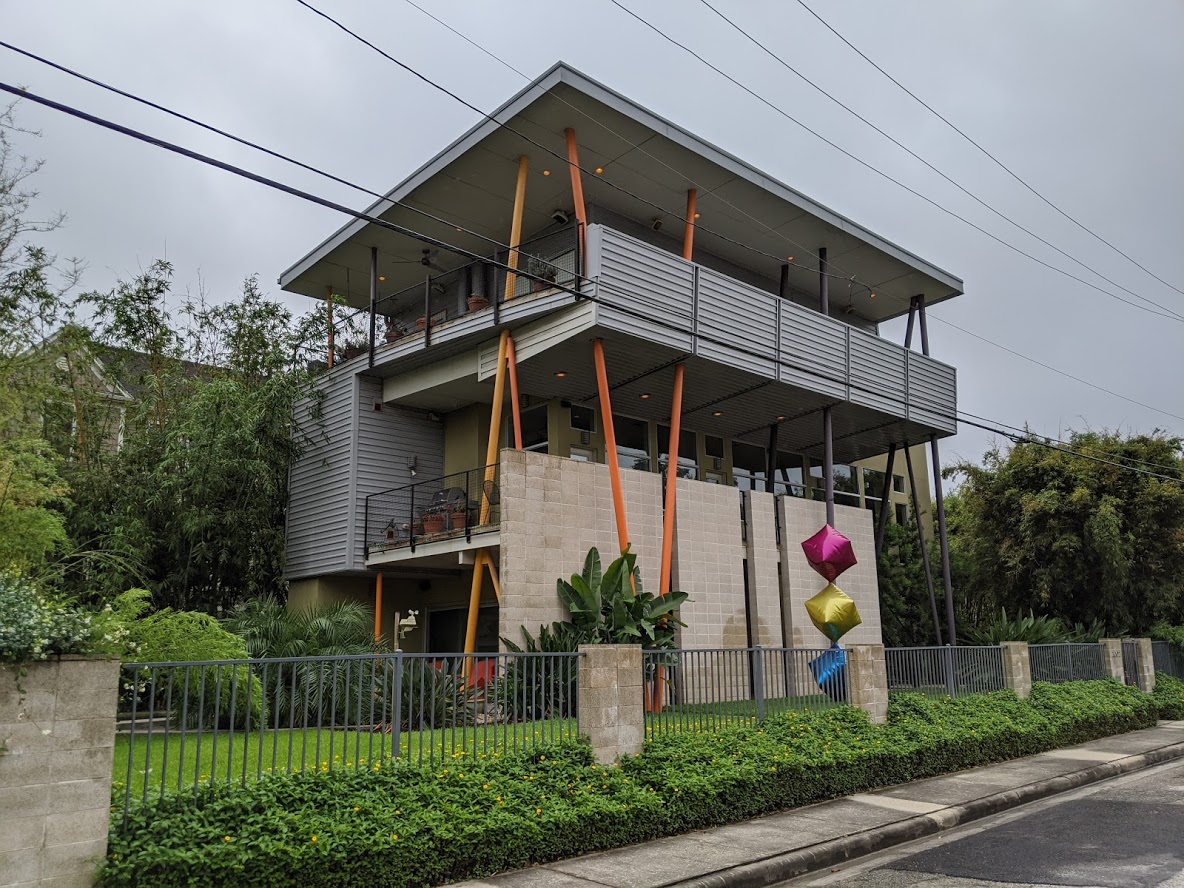 From Tragedy to Opportunity: We Could Live Better When Today’s Mayhem...

Is Traffic Congestion a Con?
Scroll to top