You are here: Home1 / Blog2 / Promoting the Houston model in South Africa, Morocco, and California

I’m back! Apologies for the sporadic posts in October – it was quite the travel month for me: two smart cities workshops (Johannesburg, South Africa and Marrakesh, Morocco), another workshop on the California affordable housing crisis with this guy (Irvine, CA), work in Connecticut, and fill-in mini-vacations in Cape Town and Barcelona (and I highly recommend both!). Whew. Way too much time on airplanes. But now I’m back in H-town and ready to be settled at home for a while.

Some items of interest from the trips:

Before I end with some pics below, a reminder that this blog is sponsored by My Best Plan for absolutely optimizing the lowest-cost electricity plan for you. I’ve known David over there for years (fellow Rice MBA), and his optimization algorithm is the best, bar none. And completely unbiased too, which can’t be said for some of the other optimizers out there that have been uncovered as fronts for electricity marketing companies. Send him (or me) your latest electricity bill to get an estimate of your potential savings – it’s free, and you have nothing to lose while potentially saving hundreds or even thousands of dollars (as he’s saved me over the years).

Now finishing this post with a couple of pictures from the trip:

Meeting the Mayor in the Johannesburg city council chambers, which are quite impressive, but I can’t imagine trying to run a city government with that many different representatives (at least a 100+). Glad Houston keeps it a more manageable number, even if our council chambers aren’t as impressive. 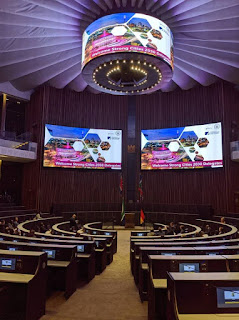 The “Houston, we have a problem” meme has even made it to Barcelona bus shelters, lol ?  Well, at least we’re known globally, right? 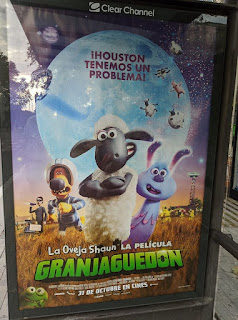