You are here: Home1 / Housing2 / What is Middle-Income Housing Affordability?

What is Housing Affordability?

Housing affordability is the relationship between housing costs and income. Affordability can only be evaluated if there is a comparison to income. Yet, analysts and journalists often use refer to house prices or rents or their increases without relation to incomes to describe housing affordability. Prices are not an indicator of affordability if they are not compared to incomes but have only anecdotal value. Nor are house price or rent trends an indicator of affordability without comparison to incomes. An analytical evaluation of the costs of buying a property or renting should cover the utility expenses involved as they can be a defining factor in affordability. Consequentially, a thorough examination of your bills expenditure should be carried out. For example, if you could get a better plan for the likes of your electricity elsewhere, then you might want to consider switching through a site like https://www.simplyswitch.com/. Once you have found the ideal plan, you can put this figure in perspective alongside other critical expenses involved housing costs. When it comes to becoming a homeowner, there are many aspects that you will come across that you may not be familiar with. From finding out about PMI definition, checking your credit score, to equity and viewing properties, there is a lot to consider and to take in. If everything becomes overwhelming during this process, be sure to look into finding a real estate agent, who can help make this stage in your life a lot less stressful and easier to manage. You don’t have to go through this alone. Also, doing research in your spare time into mortgages could also assist you in the long run.

What is Middle-Income Housing Affordability?

Middle-income housing affordability is important, because affordable access to quality housing has been pivotal to the democratization of prosperity that occurred in the last century in most high-income nations. Normally, the competitive market has provided middle-income housing without the need for subsidies. ways in which existing mortgage owners have done to make their property more affordable is to use loan modifications. You may want to look up how long do loan mods take to see if this might be beneficial to you.

Middle-income is different from low – income housing (also called “affordable housing” or “social housing”), which relies on public subsidies to serve the needs of households unable to afford the house prices or rents prevailing on the open market. Focusing on middle-income does not indicate a lesser interest in low-income housing, because subsidy eligibility requirements are tied to house prices. Better housing affordability translates into fewer households seeking housing subsidies through affordable housing programs (and less public expense).

There are two principal dimensions of middle-income housing affordability — between housing markets and within individual market over time.

Housing affordability can be measured for both owned and rented housing. Price-to-income ratios are typical for owned housing, including the “median multiple” used in the Demographia Survey (below). Percentage of incomes spent on rents are often used to evaluate rental housing affordability.

The Importance of Middle-Income Housing Affordability

Housing is usually the largest budget item for households. The differences in housing costs between major metropolitan areas now increasingly drive differences in the costs of living. Housing costs also vary far more in their high to low range than in the other two major expenditure categories, according to the US Bureau of Economic Analysis, which are services not including rents and goods. (Figure 1).

Middle-income housing affordability is also important to the economy. Paul Cheshire of the London School of Economics and Wouter Vermeulen of VU University wrote, “… [h]ousing being the dominant asset in most households’ portfolios, there are also repercussions on saving, investment and consumption choices.” Where housing is more affordable, households will have more discretionary income to purchase additional goods and services and to save (which generates investment). All of this can contribute to job creation and a stronger economy.

Not only do higher house prices lead to a lower standard of living, but can also increase poverty. For example, California has the highest housing cost adjusted poverty rate among the 50 states of the United States, at 20.4%. This compares to California’s 14.5% rate without adjustment for housing costs. 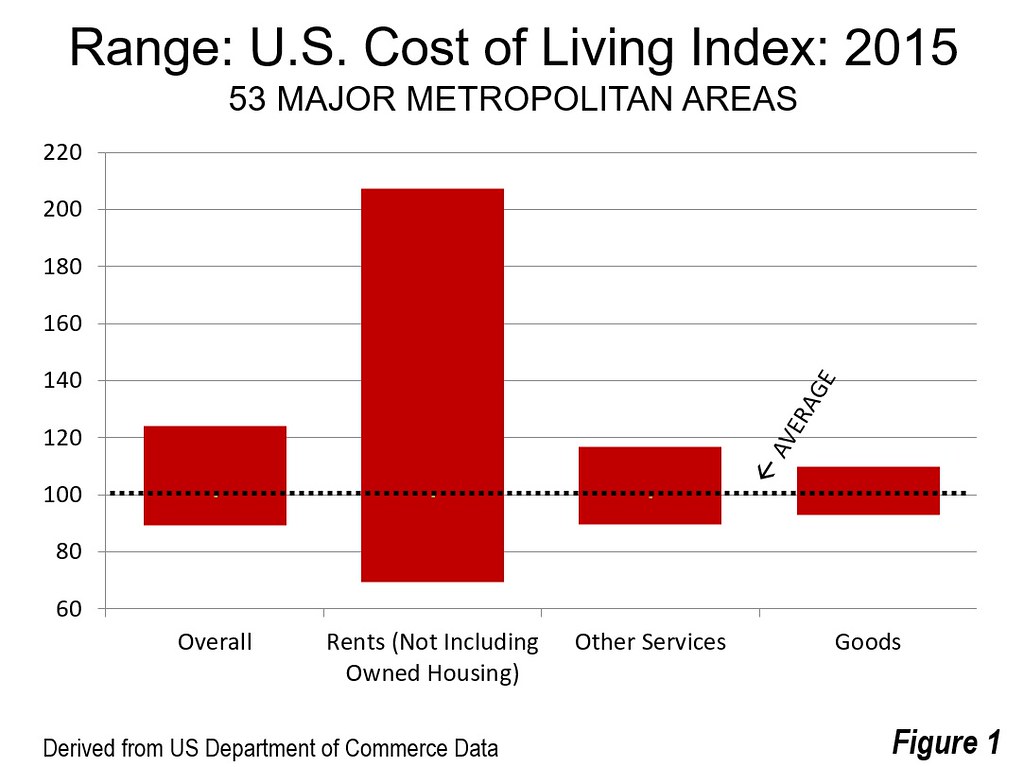 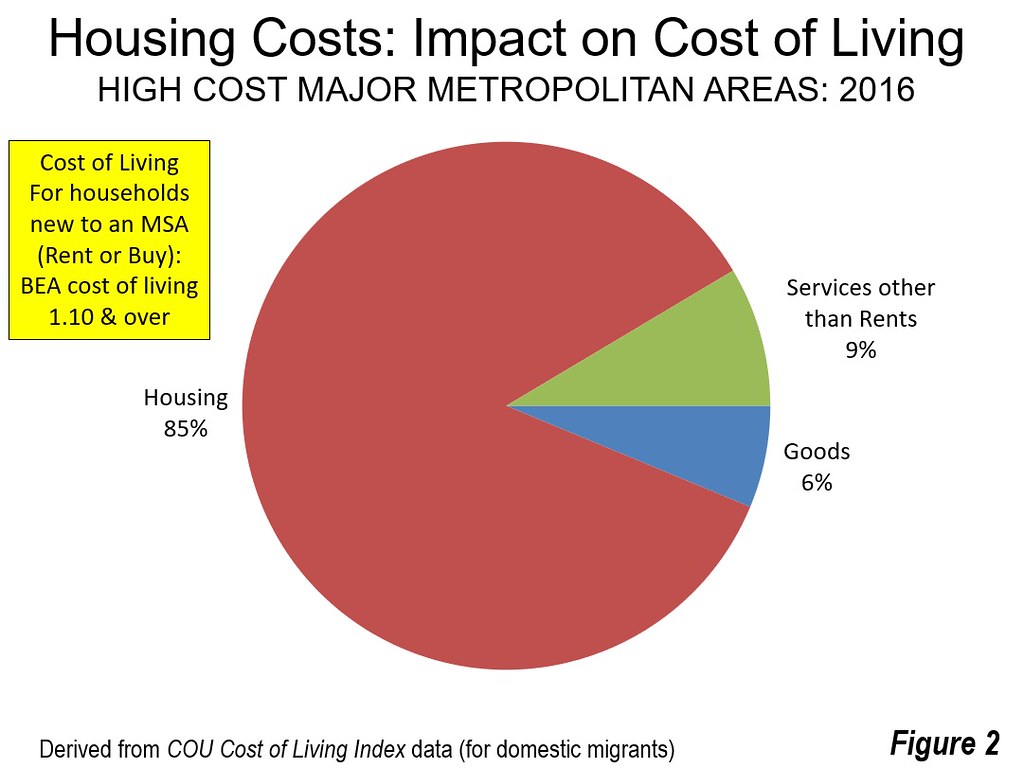 One of the most utilized owned housing affordability metrics is the price-to-income ratio. A United Nations publication indicated:

“If there is a single indicator that conveys the greatest amount of information on the overall performance of housing markets, it is the house price-to-income ratio. It is obviously a key measure of housing affordability. When housing prices are high relative to incomes, other things being equal, a smaller fraction of the population will be able to purchase housing.” 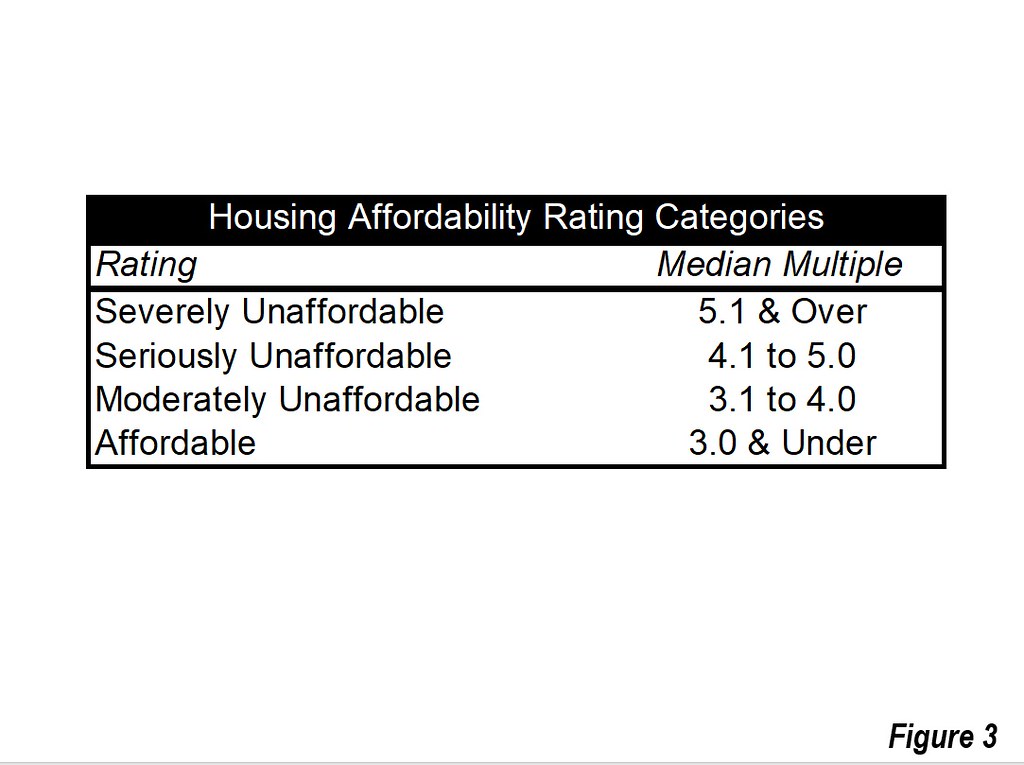 The Geography of Housing Affordability

Demographia evaluates housing affordability between housing markets: Housing markets are coterminous with labor markets (metropolitan areas). Within housing markets, there will typically be a large urban area, which is defined an expanse of contiguous built-up land (see Demographia World Urban Areas). The area beyond the urban periphery is defined as the urban fringe, which is generally the land between the principal urban area and the boundaries of the metropolitan area. Typically, the urban fringe contains virtually all of the greenfield (undeveloped) land that can be used for new housing. Much of the growth of urban areas that has occurred since World War II in Australia, Canada, New Zealand, and the United States has been in detached housing tracts in greenfield areas.

The Time Dimension of Housing Affordability

The Need for Clarity

As many cities evaluated by Demographia suffer severe housing affordability, evaluations need to be conducted with sufficient clarity. Serious housing affordability evaluation requires comparison that includes incomes, as well as comparisons between housing markets and over time. In fact, much of the nation remains affordable by historic standards — severe unaffordability is limited to a minority of markets. The public is misled by analyses that fail to include both prices and incomes (See related article: “Housing Affordability from Vancouver to Sydney and Toronto: Time to Do What Works“).

Note 1: Metropolitan areas are “economic cities,” generally not related to the physical jurisdictions of cities as local government authorities, which may be larger or smaller than metropolitan areas.

Note 2: Parts of this article are adapted from published materials I have authored or co-authored.