Impact of Harvey Strongest in the Resale Market; New Home Sales Should Surge in 2018

Metrostudy’s 3Q17 survey of the Houston housing market shows that Houston has maintained its number two position behind Dallas / Fort Worth in terms of annual new home starts. Houston achieved 27,713 starts, representing a growth rate of 6.4% year over year. Metrostudy anticipates a total year over year 5% to 6% increase in Houston single family starts at the conclusion of 2017 followed by a more modest 2% to 3% increase at the end of 2018. This differs from Metrostudy’s previous 2017-2018 projections: strong starts volume in 2Q and 3Q 2017 combined with current lack of focused growth direction in the energy industry has resulted in Metrostudy projecting a stronger starts rebound in 2017 with a slower continued growth trajectory for 2018.

“Houston’s new home market and general economic conditions cannot be discussed without touching on the impacts of Hurricane Harvey,” said Lawrence Dean, Regional Director of Metrostudy’s Houston market. “In general, Metrostudy does not anticipate any significant increase in new home sales demand generated by Harvey victims until 1Q18. These potential future buyers are simply focused on managing their damaged homes, temporary housing, insurance claims, and FEMA assistance to be able to move forward on purchasing new homes until this timeframe.”

Below are key statistics focused on Harvey’s impact on Houston: 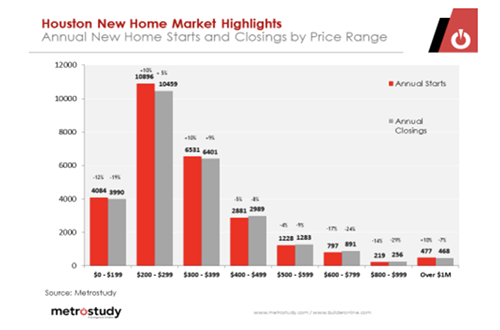 Starts surpassed closings in the third quarter, for the second quarter in a row. Builders closed 7,540 homes in 3Q17, 113 more than in 3Q16. Builders have generally expressed being pleased with their overall sales volume in 2017 but saw more consistent strong sales volume in the first quarter of the year than they did in the 2Q. Houston continues to experience a very competitive new home sales environment although builders have been succeeding at selling through previously built up spec home inventory.

Quarterly lot deliveries were nearly identical to quarterly new home starts in 3Q 2017, with 8,006 new lots being delivered while 8,008 new home starts occurred. On an annual basis growth in new lots delivered remains very tight and similar in volume to lots absorbed. Over the last twelve months 27,798 new lots were delivered while 27,713 lots were absorbed by new home starts. Market-wide inventory of vacant developed lots (VDL) remains constant at 44,460 (down five from the previous quarter), or 19.3 Months of Supply.

Inventory of resale single family homes market wide has grown by 9.3% year over year. Currently there is an inventory of 20,487 true resale listings which is consistent with inventory levels seen one year ago. This reflects 3.7 months of supply which is the lowest level seen in twelve months.

This piece originally appeared on Metrostudy.com.

The Price of Texas Growth: Housing Affordability
Scroll to top