You are here: Home1 / Planning2 / The Quest for Food Freedom 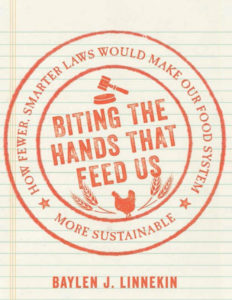 Mariza Ruelas currently faces up to two years in jail in California for the crime of selling ceviche through a Facebook food group. Welcome to the mad world of American food regulation. In Biting the Hands That Feed Us, Baylen Linnekin looks closely at a system that can take pride in a historically safe food supply but that also imposes too many rules that defy common sense.

Linnekin traces the system’s origins to The Jungle, Upton Sinclair’s exposé of the appalling conditions in Chicago’s slaughterhouses, and to the New Deal’s hyper-regulation of agriculture. Such intrusiveness culminated in the case of Wickard v.Filburn, in which the Supreme Court ruled that Americans don’t even have the right to consume food they grow themselves, on their own land. Food regulation has marched steadily onward ever since.

While working conditions and food safety improved dramatically thanks to these efforts, the move to regulate all food products according to uniform standards also produced a system with a host of strange rules—such as requiring organic skim milk that is free of additives to be labeled “Non-Grade ‘A’ Milk Product–Natural Milk Vitamins Removed.” Bans on urban agriculture have outlawed backyard chicken coops and front-yard gardens. Seemingly random changes in safety requirements force the shutdowns of businesses with no incidents of contamination or sickened customers. In some jurisdictions, it’s illegal to slice off a sample of cheese or cut the stalk off of lettuce at farmer’s markets. Microbreweries were threatened with having to register as pet-food manufacturers if they wanted to donate their spent grains for animal feed (a long-standard practice even for big breweries). In public parks, foraging of any sort—such as picking wild berries—is often banned.

Mariza Ruelas made her ceviche at home, which is why she’s in trouble with the law: food-safety mandates have made home production of food for sale, even in small quantities, illegal. You might be in trouble, too, if, say, you contribute a pan of brownies to the bake sale at your child’s school. That’s probably illegal.

States and localities are starting to push back at this regulatory insanity. Some states have instituted “cottage-food laws” allowing home preparation of small amounts of food for sale in limited venues, such as at farmer’s markets. Wyoming passed a comprehensive Food Freedom Act reducing regulation of food sales, so long as no middleman is involved. Some cities have legalized the raising of chickens or urban beekeeping. But there’s a long way to go.

For Linnekin, a food-law professor, the goal is to make traditional and “sustainable” agricultural practices legal. Much of what he argues for makes good sense, but there’s another side to the issue. Because so many urban hipsters want to produce (or at least consume) artisanal food products, food law, along with zoning, often serves as their point of entry into the vast regulatory web that smothers so many American businesses. This awareness doesn’t necessarily turn urban epicures into liberty-minded activists, though. Many small-scale organic-food producers and their customers simply want to make their preferred practices legal and easier to practice—while saddling major corporate producers of food with added regulations. In general, food activists aren’t much interested in establishing better rules and then letting the market determine outcomes. Instead, they seek specific outcomes—more composting, for example—and deem any rule that fails to support such goals to be a bad one.

Linnekin seems somewhat sympathetic to this small-is-better tendency. He wants to eliminate “ag-gag” laws that protect farmers from harassment by activists. He thinks that many food products carry antiquated grading standards and wants to see them changed. But many of these standards have solid rationales. Linnekin objects, for example, to the USDA’s “prime” grade for beef being determined by the level of fat marbling. But fat is the driver of taste, and many small producers of leaner, grass-fed beef sell products that often don’t taste very good. They don’t deserve a “prime” grading.

While regulations hostile to industrial, mass-scale agriculture—which feeds a global population of 7 billion people—should be avoided, rationalizing archaic and protectionist regulations makes sense. So does exempting small-scale producers from many regulations and embracing a more general “food-freedom” philosophy. As Biting the Hands That Feed Us makes clear, our current food-regulatory approach is too often a theater of the absurd.

This post original appeared in City Journal on March 15, 2017.

Aaron M. Renn is a senior fellow at the Manhattan Institute, a contributing editor of City Journal, and an economic development columnist for Governing magazine. He focuses on ways to help America’s cities thrive in an ever more complex, competitive, globalized, and diverse twenty-first century. During Renn’s 15-year career in management and technology consulting, he was a partner at Accenture and held several technology strategy roles and directed multimillion-dollar global technology implementations. He has contributed to The Guardian, Forbes.com, and numerous other publications. Renn holds a B.S. from Indiana University, where he coauthored an early social-networking platform in 1991.