You are here: Home1 / Urban Issues2 / In Praise of Urban Sprawl

Dense urban living discourages child rearing. It is no surprise that there are 80,000 more dogs than children in San Francisco. 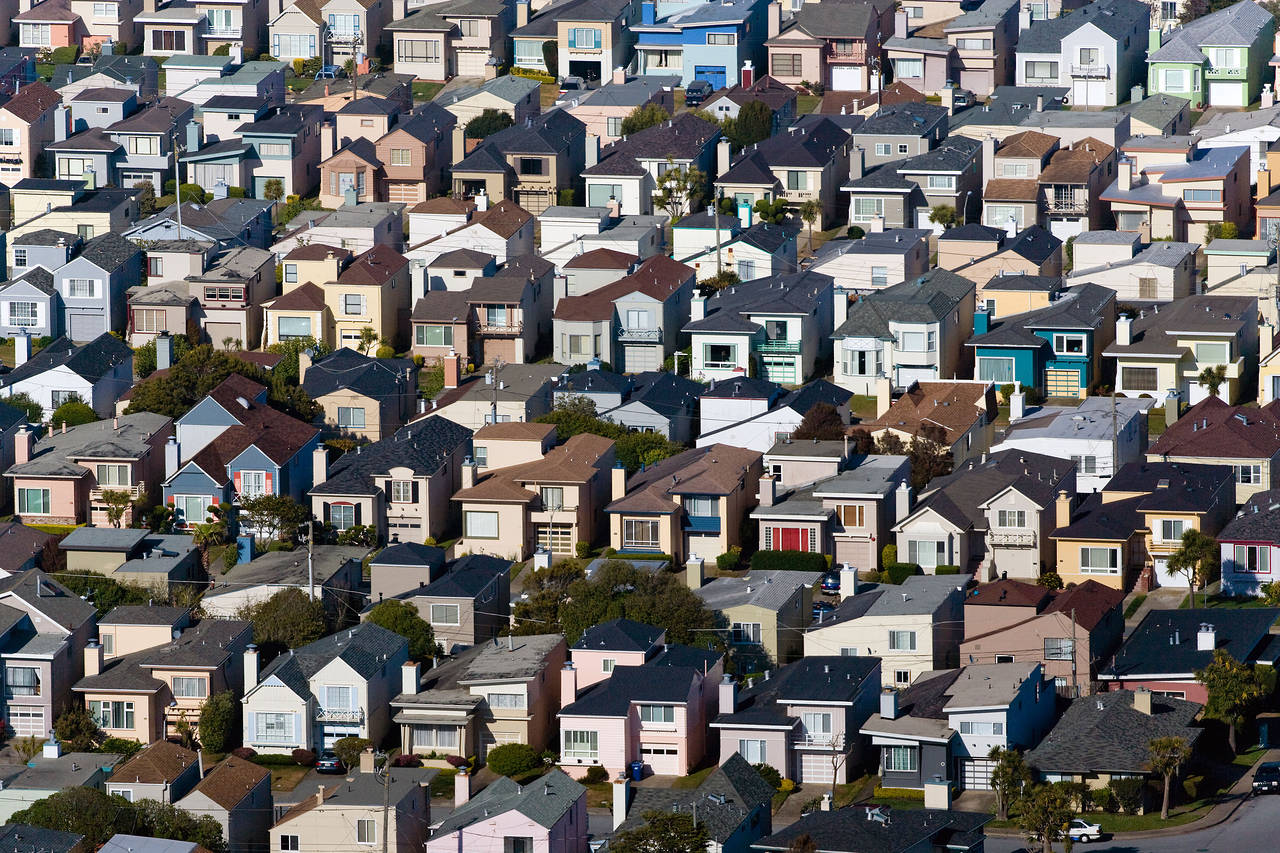 Homes in Daly City, Calif., a San Francisco suburb whose population exploded in the 1940s with the construction of low-cost housing tracts. PHOTO: ALAMY

Between 1840 and 1910, the population of Manhattan grew sevenfold, reaching a peak of 2.3 million in 1910. The average population density of its built-up areas tripled during this period. The New York Times in 1898 spoke of “densely crowded quarters” and “inmates . . . huddled together in their cramped hutches like rabbits.” How cramped? There were 620 people per acre, on average, in the walk-up tenements of the Lower East Side and 540 people per acre, on average, in the East Village. Jacob Riis, the author of “How the Other Half Lives,” placed the blame for overcrowding on the shortage of “decent” residential buildings in Manhattan: “We have a tremendous, ever swelling crowd of wage-earners which it is our business to house decently; . . . it is not housed decently; . . . it must be so housed here for the present, and for a long time to come, all schemes of suburban relief being as yet utopian, impracticable.”

Riis, writing in 1890, turned out to be the impractical one. The teeming masses of New York—and the country’s other urban centers—would for the most part not find “decent” living conditions in a new urban utopia but, eventually, in the suburbs. A contemporary of Riis’s, Adna Ferrin Weber, writing in 1899, had it right. “The ‘rise of the suburbs’ it is,” he wrote, “which furnishes the solid basis of a hope that the evils of city life, so far as they result from overcrowding, may be in large part removed.” After 1910, the population of Manhattan began to decline, and the population of its overcrowded neighborhoods began to disperse. Between 1910 and 1980, Manhattan lost two-fifths of its population; by 2015, it had recovered only a quarter of this loss.

The positions taken by Riis and Weber still resonate with us today in contentious debates about the future of cities. The great majority of urban planners and activists now decry suburban expansion as “sprawl.” They are committed to containing it and to creating denser, more compact cities, cities that promote apartment living as well as walking, bicycling and public transport. The planners and activists want to conserve energy and limit greenhouse-gas emissions. They stand with Riis in their belief that cities should improve their quality of life and not rely on suburban relief. Yet a growing minority of pragmatic urban thinkers welcome suburban expansion and are committed to keeping residential land supply ample, affordable and accessible to metropolitan job markets. They side with Weber.

Joel Kotkin, in “The Human City: Urbanism for the Rest of Us,” presents the most cogent, evidence-based and clear-headed exposition of the pro-suburban argument. In Mr. Kotkin’s view, there is a war against suburbia, an unjust war launched by intellectuals, environmentalists and central-city enthusiasts. In pithy, readable sections, each addressing a single issue, he debunks one attack on the suburbs after another. But he does more than that. He weaves an impressive array of original observations about cities into his arguments, enriching our understanding of what cities are about and what they can and must become, with sections reflecting on such topics as “housing inflation,” “the rise of the home-based economy,” “the organic expansion of cities” and “forces undermining the middle class in global cities.”

The essence of Mr. Kotkin’s defense of suburban expansion in the United States—with which he is most familiar and where the opposition to his views is better organized and much more formidable than elsewhere—is that suburbs now contain the great majority of residences as well as jobs. Suburban neighborhoods, he suggests, are as conducive to community living and as “green” as central-city ones. But his critique of conventional urban-planning wisdom goes further. He argues that central-city living is largely unaffordable by the middle class, let alone the poor; that central cities are becoming the abodes of the global rich, encouraging glamorous consumption rather than providing middle-class jobs; and that dense urban living in small, expensive quarters discourages child rearing, a critical concern for policy makers in many industrialized countries today. (There are 80,000 more dogs than children in San Francisco.)
In essence, Mr. Kotkin argues, being anti-suburb is being anti-family. With this book he wants to shift the emphasis back to people, the derided suburban masses that he refers to as “the rest of us,” people who have become almost invisible to anti-sprawl adherents, especially those who raise an alarm about the destruction of natural habitats by expanding cities. In a way, Mr. Kotkin echoes Bruce Chatwin’s comment on Darwin: “He lapsed into the common failure of naturalists: to marvel at the intricate perfection of other creatures, and recoil from the squalor of man.”

Mr. Kotkin, in his unabashed defense of the essential role that suburbs play in cities the world over, is clearly on the offensive. He does not pretend to present himself as an even-handed expert; he presents his arguments and leaves the opposition to argue its own case. All the same, and much to my delight, the book does not read as a diatribe or an anti-urban manifesto. Mr. Kotkin comes across as a relaxed, confident and experienced litigator standing in front of a jury of readers and making his case; and “The Human City” does provide a vision for a legitimate and pragmatic urbanism that could and should become mainstream.

Indeed, at the end the book Mr. Kotkin seeks a constructive compromise with the anti-sprawl armies. His answer to “How should we live?” is: amid an “urban pluralism” that “encompasses the city center as well as close-in suburbs, new fringe developments, and exurbs.” I find this quite sensible and level-headed but worry that the middle ground—the place we used to come to and to sit and reason together and agree on the common good—seems to be more and more difficult to get to these days.

My own concern with Mr. Kotkin’s position is the way in which he tries to fuse the case for pragmatic urbanism in industrialized countries with his summary discussion of suburbanization in less developed countries, where—with the exception of East Asia—increasing fertility rates is not an important concern, and where rapid urban population growth is indeed a very serious one. As contentious as debates over suburban expansion may be in industrialized countries, the problems are much more pressing for countries whose urban populations are still increasing rapidly, poorer countries with weaker regulatory regimes and fewer public resources that are less able to adequately prepare for this challenge. Between 2015 and 2050, the increase of the urban population in less developed countries is expected to be 18 times the increase in industrialized countries. Unfortunately, Mr. Kotkin does not defend urban expansion and suburbanization in, say, Sub-Saharan Africa or South and Southeast Asia, with the same zeal he applied to his defense of American suburbanization, preferring instead to recommend that rural and small town folks stay put instead of migrating to large cities already busting at their seams. I am afraid this is unlikely to happen in any and all countries where people are free to move. As the World War I song by Lewis and Young chimes: “How ya gonna keep ‘em down on the farm after they’ve seen Paree?” Barring draconian measures, there is nothing we can do to prevent people from moving to cities. In China, to take one example, there are now more than 250 million people in cities without residence permits, or hokous.

Urban planners in less developed countries who are critical of suburban expansion and who insist on containing rapidly growing cities or, worse yet, preventing their population from growing, are simply not doing their job, the job of planning for the orderly expansion of these cities. And the time is now. Our window of opportunity will close by the end of this century, when the urbanization project—the global movement of people to cities that started in earnest in the early 19th century—will be largely complete. On average, the land area of cities in less developed countries can be expected to triple by 2050. In cities in sub-Saharan Africa, for example, where a third of the projected increase in the global urban population will be accommodated, only a tenth of potential expansion areas are formally laid out before they are occupied.

We need to have these conversations, and we need to have them now. Like the farsighted planners of New York City, we need to imagine and shape the urban areas of the world to organize their form even before anyone moves in. We need urban planners to stop hoping against hope that cities can be contained and to do their job now, to make a real difference in the lives of many millions, those invisible suburban millions that Joel Kotkin wants us to see.

—Mr. Angel is a professor of city planning at the Marron Institute and leads the NYU Urban Expansion program. He is the author of “Planet of Cities.”