You are here: Home1 / Economics2 / Organic Urbanism is the Cure for New Urbanism 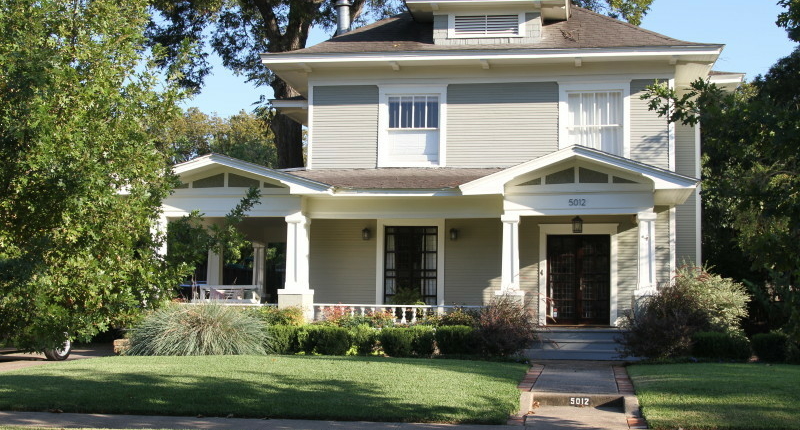 This early 1900s house, after the neighborhood had been rezoned for apartments, declined in value to $7,000 in the 1970s. Being rezoned single-family brought decades of revitalization that raised the value of neighborhood homes like this one to $700,000.

New Urbanism is like a virus. For 50 years it keeps coming back in mutated forms. It needs a cure.

First, the only thing new in New Urbanism is the new construction that tears down the organic city. A form of New Urbanism has been around for 50 years. Like I said, it is a virus that keeps coming back in mutated forms. But the scheme, of more density, new mixed-use construction, and fixed rail transit, replacing existing homes remains constant. The desire of planners to determine where you live and where you work also remains constant. New urbanists increasingly do not like single family homes, which most Americans prefer.

In contrast, what I call Organic Urbanism works with people’s preferences, particularly those of families. It protects, preserves, and nurtures the city, allowing the creativity of individuals and neighborhoods to shape the direction of the city. This includes the single-family homes as well as a diversity of housing types.

Organic urbanism supports what people want in their diverse neighborhoods. In contrast new urbanism, particularly their allies in the planning profession, oppose such housing and favor density to support public transit and claim they make homes more affordable.

In contrast, organic Urbanists think denser apartment development makes neighborhoods less walkable and less desirable. Organism Urbanism strives to preserve, protect, and rejuvenate the existing housing stock of diverse sizes, styles, and conditions that is conducive to a mix of incomes and lifestyles. Organic Urbanism also favors zoning for less than what is already built. Less dense zoning provides the incentive to preserve and revitalize the existing housing stock, or lose the privilege of higher density on a lot if an existing multi-family building is torn down. For example, if a duplex or apartment house is zoned single-family and it is torn down, it can only be replaced by a single-family home. This gives the owner incentive to maintain the existing duplex or apartment house or lose their privilege of multi-family.

Organic Urbanism approaches the city like a garden. There is an understanding that the evolution of buildings and uses should evolve rather than being plowed under and planted like an industrial farm. In a garden that is nurtured, one might plant a sapling with sun-loving plants around it. Once the tree grows, one might plant, shade-tolerant flowers under the tree. There is a natural ebb and flow of decay, rejuvenation, and new construction in an organic city. Neighborhoods fall in and out of favor, creating opportunities for those of all incomes.

New Urbanism has a goal of creating diversity by diluting good parts of the city. Organic Urbanism strives for diversity by improving out-of-favor neighborhoods.

I will describe eight key differences of New Urbanism and Organic Urbanism.

Maybe the best example of the difference between New Urbanism and Organic Urbanism is their respective position on granny flats.

Organic Urbanism, on the other hand, looks for the best economic ways for the city to evolve for senior citizens and those needing affordable homes. If a nonprofit in Dallas spent $300 a square foot to build the 400 square foot Crossroads cottages for the homeless, it becomes obvious to an Organic Urbanist that renovating existing houses is a more cost-effective means of providing affordable housing than building new granny flats. Using the homeless cottage cost figures, building a 600-square foot apartment over a garage might cost $200,000.

This does not make a one-bedroom granny flat apartment affordable or lower the cost for a senior homeowner.

In the meantime, a two-story granny flat removes a canopy of trees, looms over the neighbor’s property, lines the front curb with on-street parked cars, and creates more transience in the neighborhood. 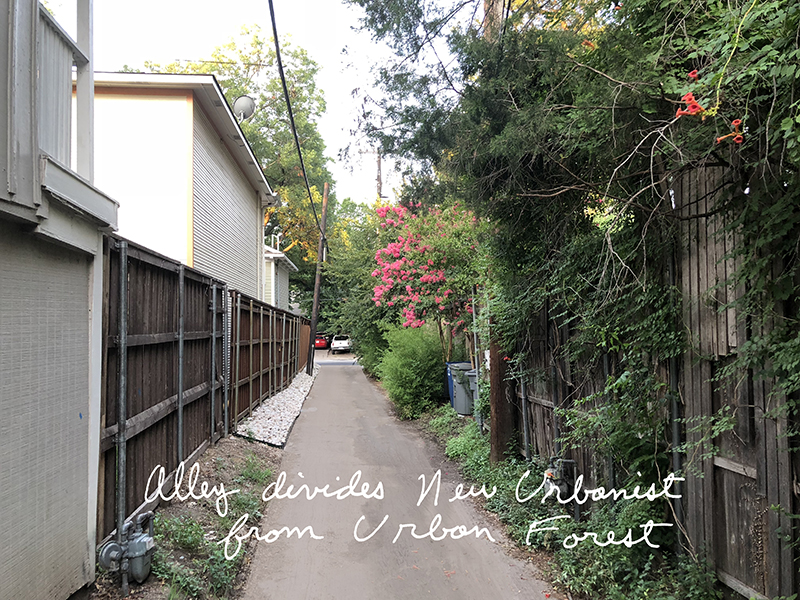 Here on one side of the alley you see New Urbanism granny flats blocking the sun and breezes that replaced towering trees. On the other side of the alley you see the layered canopy of trees that include mature pecan trees, tall cedar trees, crepe myrtles, and understory Japanese maples in the backyards of single-family homes that are still dedicated to nature, not rentals.

New Urbanism wants to create a city where people are forced to walk, forced to take fixed rail, forced to live in buildings shared with subsidized renters, and forced to live jammed together in dense neighborhoods in the name of vibrancy.

Organic Urbanism represents an alternative to the top-down tyranny of the new urbanist mantra. We recognize that the cycles of deterioration and rejuvenation create environments that people desire and where they can afford to live and work. Organic Urbanists would rather nurture a city where people enjoy living and walking in a diverse neighborhood, a city that entices Millennials and the middle class to stay in the city and raise their families.

Organic Urbanism allows creativity and self-expression can be manifested. Embracing Organic Urbanism, every person can impact the significance and stewardship of their city, their neighborhood, and their home.

Hopefully, Organic Urbanism can eradicate New Urbanism in our lifetime and reintroduce the concept that cities are not for planners or trains, but people.

Douglas Newby is a real estate broker who initiated the largest the largest rezoning in Dallas – 2,000 properties primarily in use as multi family rental properties to single family zoning. In 1979, in Dallas he created the first Restoration House of the Year Award, and for the Dallas Chapter of the AIA organized a city wide survey of architect designed and Significant homes. His TEDx talk is Homes That Make Us Happy. His website is: ArchitecturallySignificantHomes.com. Blog is DallasArchitectureBlog.com