America is becoming less mobile than in the past, but there are some major metropolitan areas — and areas within them — that have fewer people move in and out than others. US households tend to live longer in their present residences where population growth has been more modest. The data also indicates that across all major metropolitan areas, households tend to have lived longer in suburbs and exurbs than in the urban core.

The Census Bureau’s American Community Survey (ACS) reports on the length of time that residents have been living at their current address. This article describes the length of residence tenure data, focusing principally on the 53 metropolitan areas with more than 1,000,000 residents. This includes the latest data (for 2017) at the metropolitan area level as well as the latest data at the small area level using the City Sector Model (Figure 12). This permits examination of length of residential tenure within major metropolitan areas.

As of 2017, the median period of residence (tenure) in the United States was 7 years (Figure 1). Among those living in owner-occupied housing (those with and without mortgages), the median was 12 years, while among renters the median tenure was below two years (See Note 1, “Note on the data”). 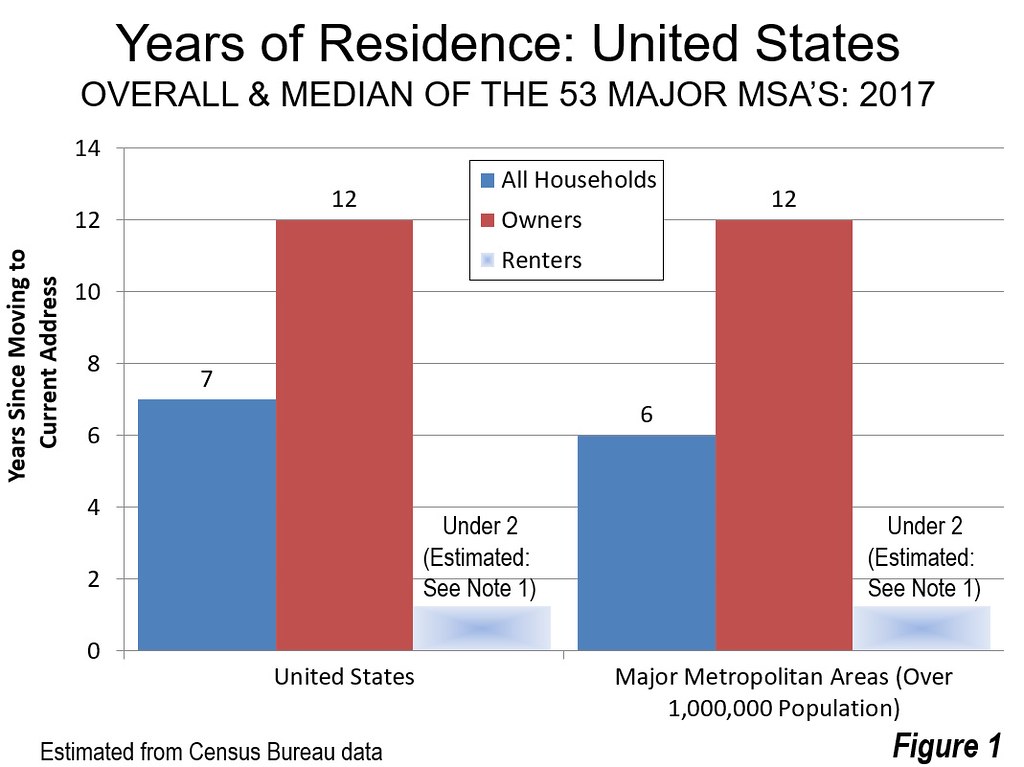 Among the major metropolitan areas, the longest median period of residence was in Pittsburgh, at 11 years. Pittsburgh’s long lengths of tenure are not surprising, in view of its lack of population growth. As presently defined geographically, the Pittsburgh metropolitan area had two percent less population in 2017 as in 1930 (See Note 2: Pittsburgh Population). This declining population base denied the metropolitan area the new residents that would have reduced its median residency period.

Outside Pittsburgh, Buffalo had the slowest growth rate, at 25 percent from 1930. Buffalo is among the metropolitan areas with the second longest median residency, at nine years. Slow growing New York, Philadelphia and Hartford, also had medians of nine years. All of the 10 metropolitan areas with the longest residence medians were in the Northeast or the Midwest (Figure 2). 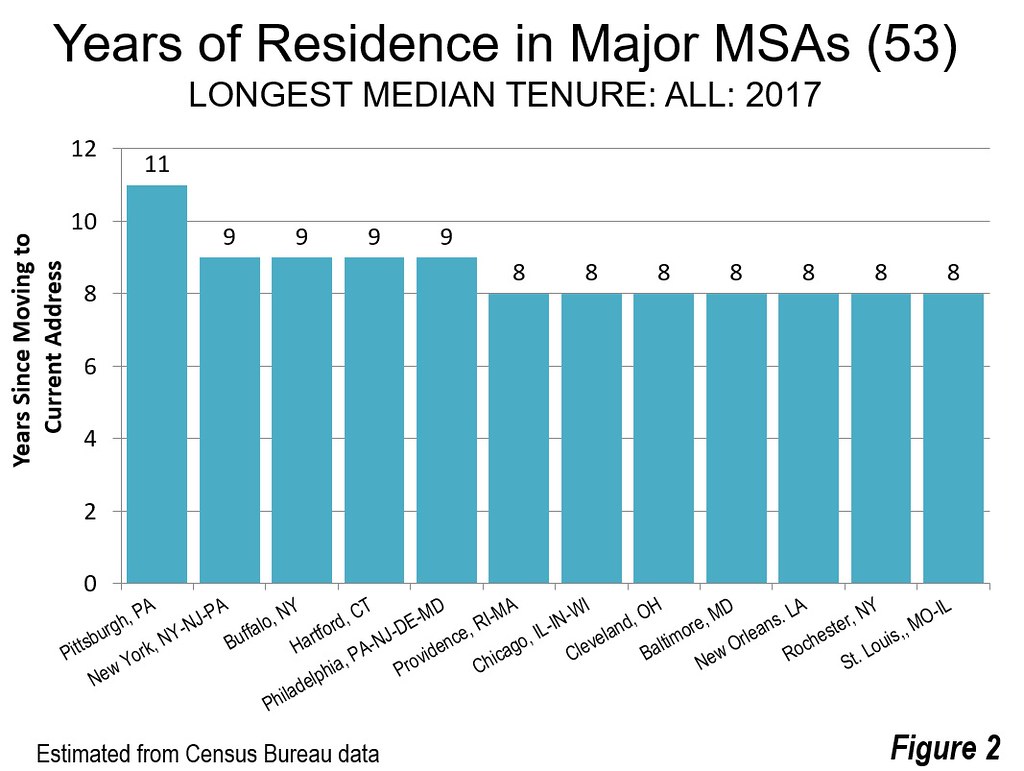 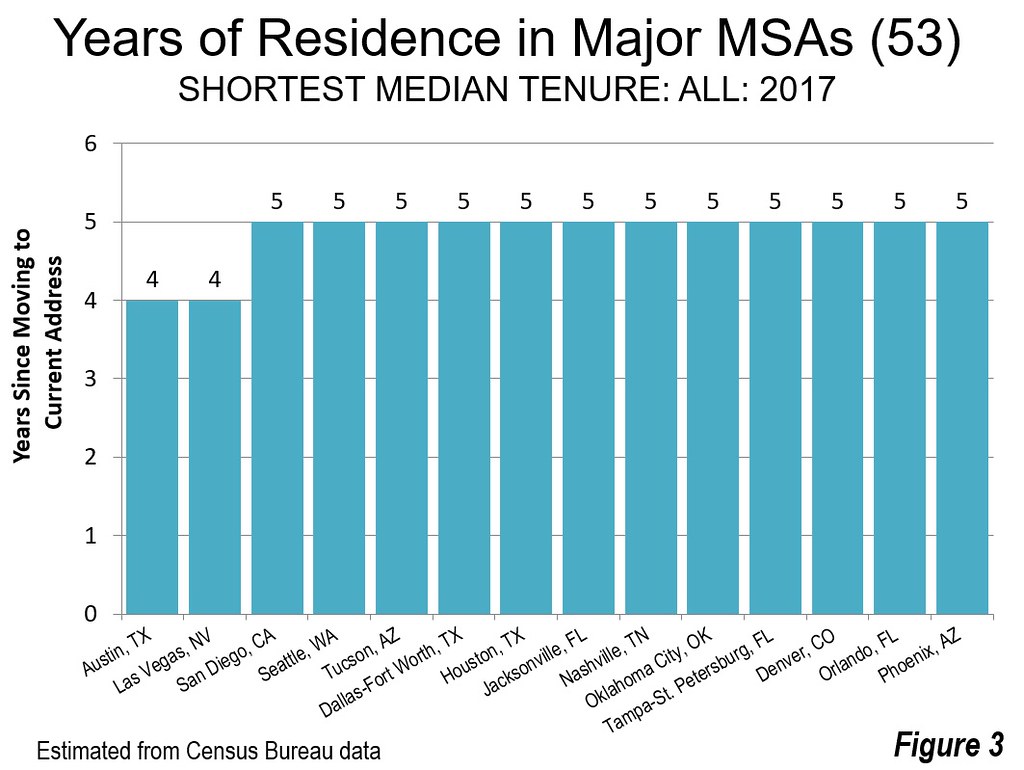 As in the all households data, Pittsburgh has the longest median owner occupied residence periods, at 16 years. The home ownership data, unlike that of households, is not monopolized by the Northeast and Midwest, though the slow growing metropolitan areas of the Northeast and Midwest have 11 of the 14 longest medians. Los Angeles is in a five-way tie for second longest, at 15 years (Figure 4). It is also notable that San Jose, which has had 85 percent of its growth since 1950 and no pre-World War II urban core, ranks a seven way tie with a median of 13 years. 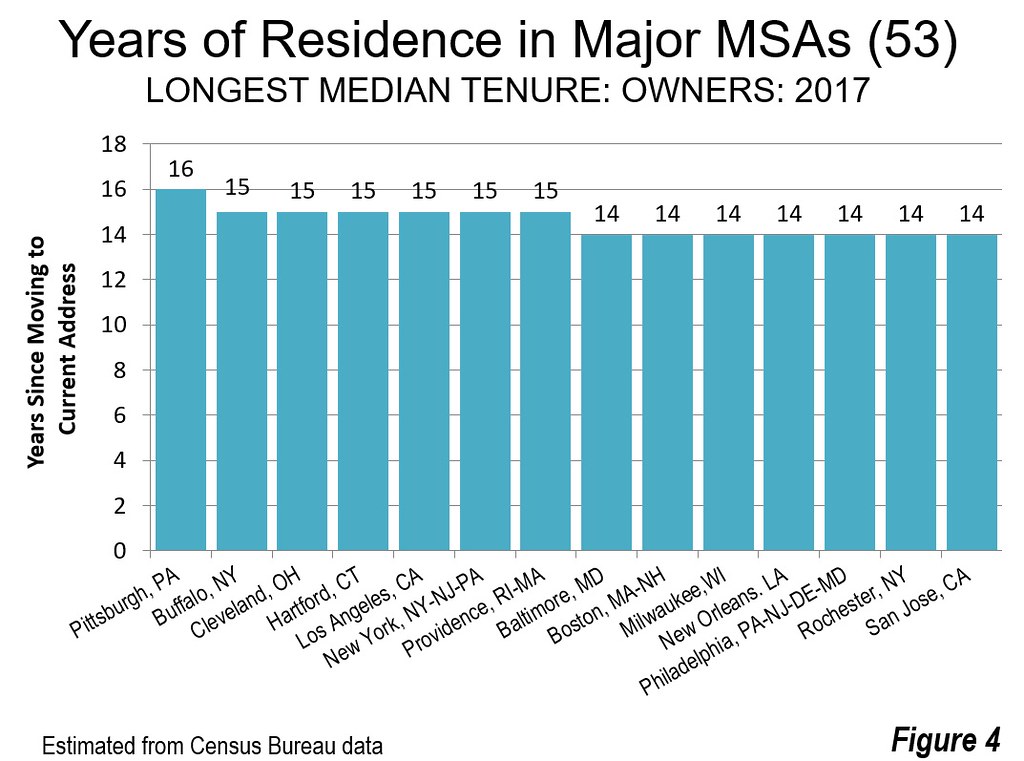 The longest rental median was in New York at five years. Los Angeles and San Francisco each had a median of four years (Figure 5). All of the other 50 major metropolitan areas had a median rental tenure length of three years or less. 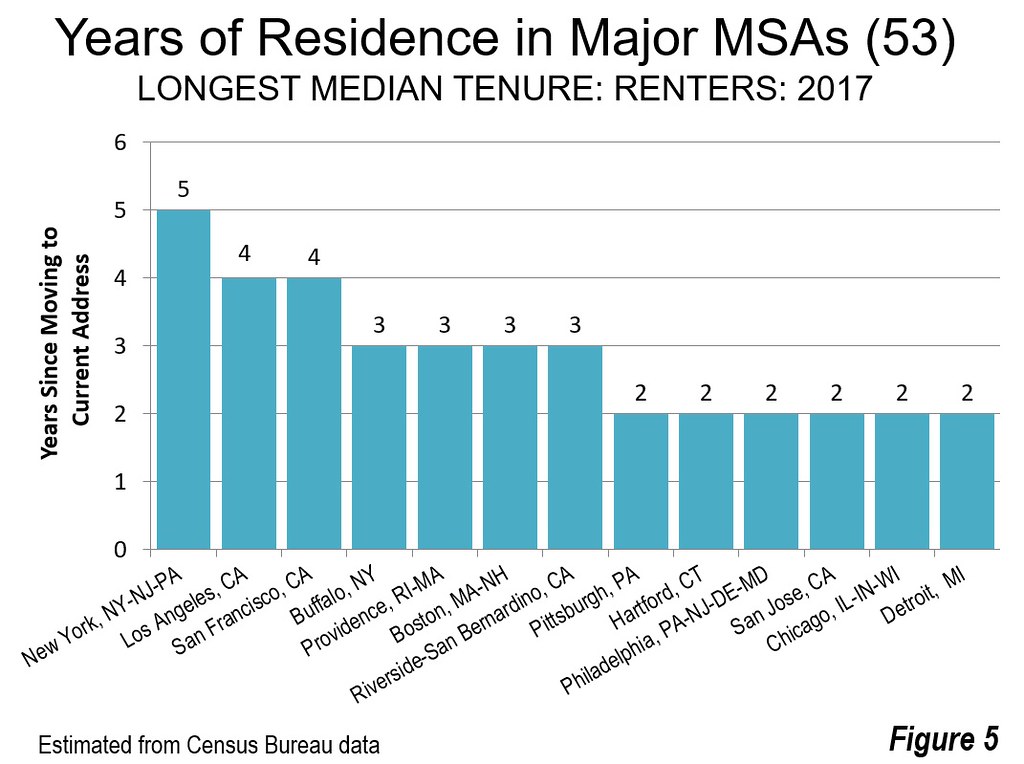 The length of residency varies considerably, as indicated by the City Sector Model analysis. The ACS 2012/2016 survey (taken over five years, one-fifth in each year, with a middle-year of 2014) indicates a population weighted median of 7.0 years for all major metropolitan area residents. The shortest periods of residency are in the Urban Core, with 2.4 years in the CBD and 4.6 years in the Inner Ring. The suburban and Exurban residency periods are longer, ranging from 6.9 years to 8.8 years (Figure 6). 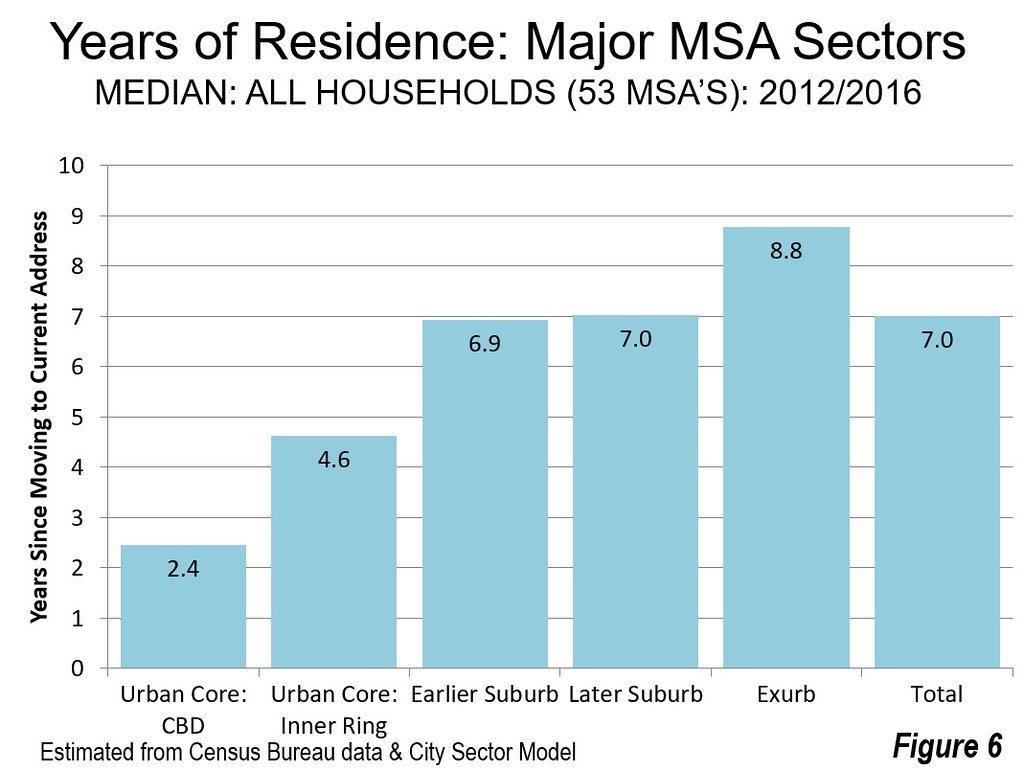 These differences are largely driven by the ownership data, since the rental tenure lengths are fairly stable across the city sectors. The shortest median period of residency is among owners in the Urban Core: CBD is 6.8 years, well below the other four sectors (from 10.8 years to 13.4 years). Overall, home owners have been in their houses for a median of 12.1 years. Among renters, the medians are all between 2.0 and 2.2 years, except in the Exurbs, where the median reaches 2.5 years (Figure 7). This suggests that as people continue to move from the urban cores, where renting is more common, to the suburbs and exurbs, they are more likely to transition to home ownership. This is despite the popularity of substituting renting for buying among academics, urban planners and others. 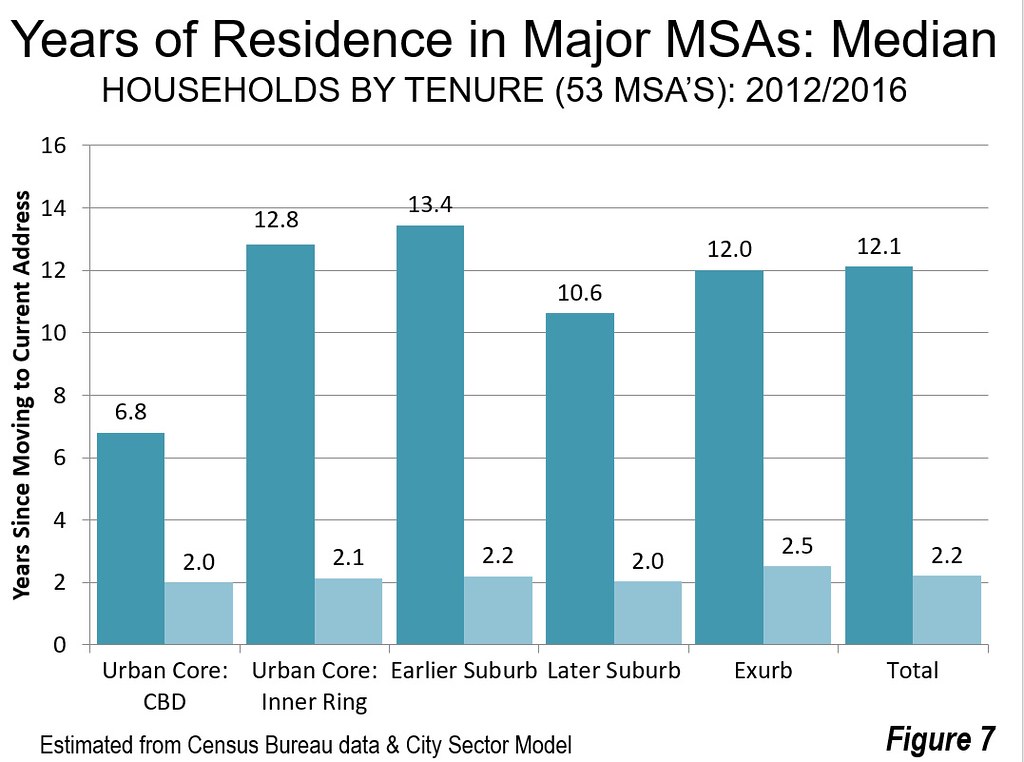 As is so often the case, New York stands out as an outlier. With a median residential tenure of 7.0, New York’s CBD is well above that of San Francisco (3.1) and Los Angeles (3.8) and more than double that of the other 50 major metropolitan areas (Figure 8). New York’s median tenure is also higher in each of the other city sectors, but the differences are less. (Figure 9). 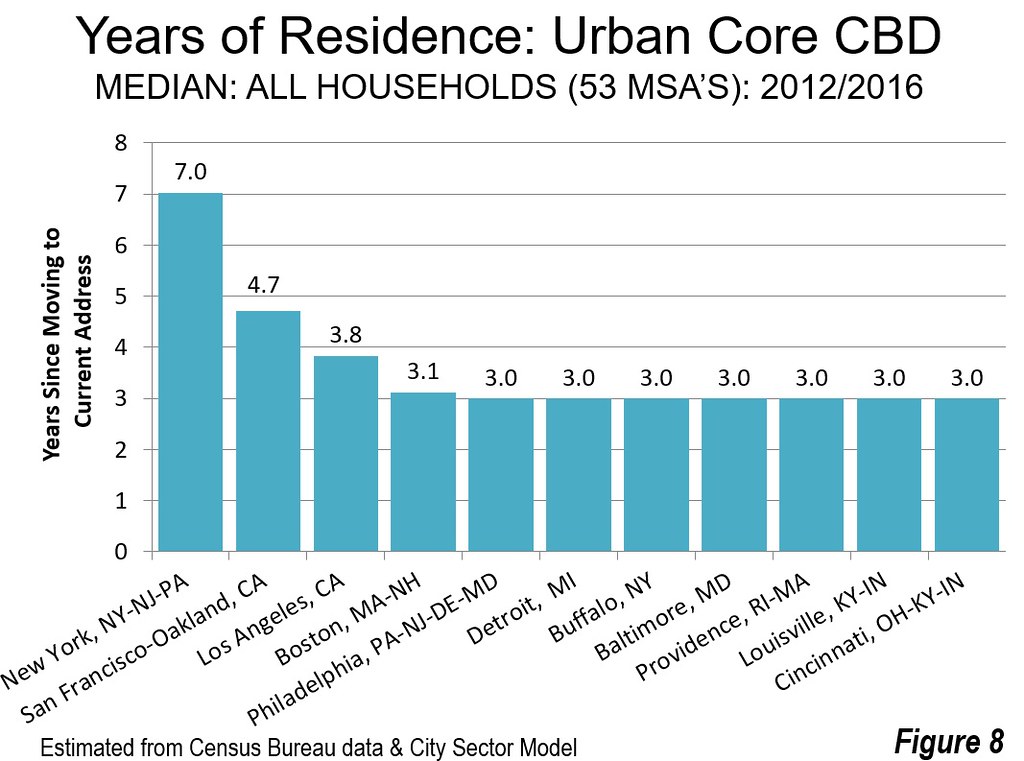 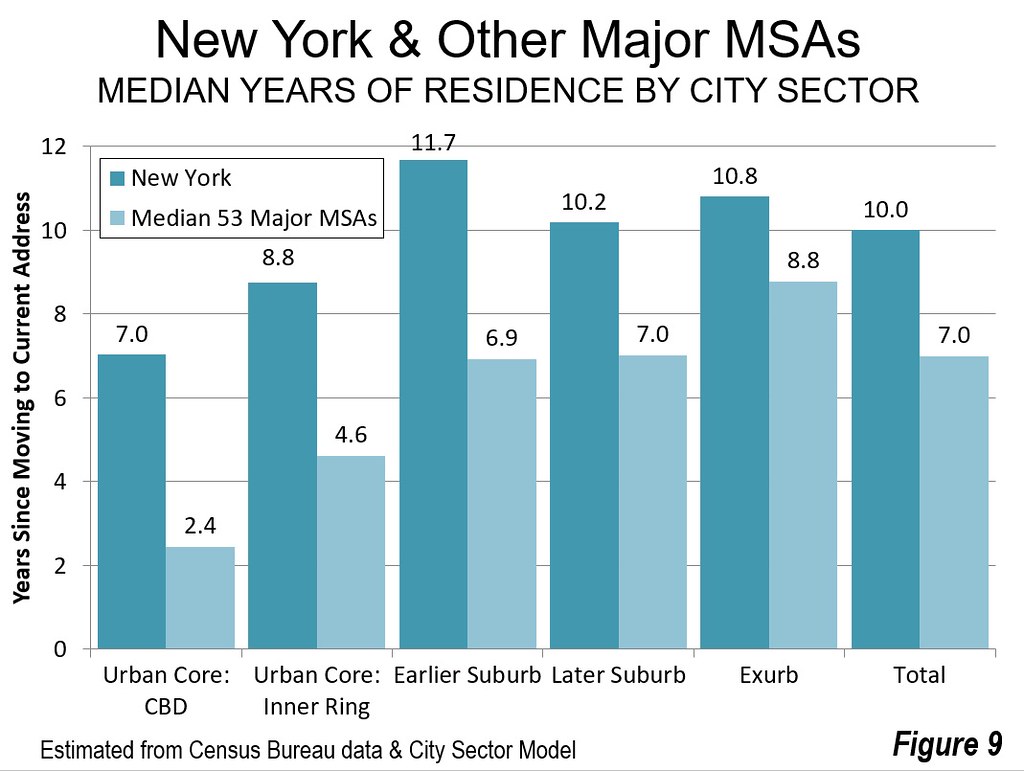 In the balance of the Urban Core, the Inner Ring, all of the longest medians in the Urban Core are in the East and Midwest, except for San Francisco (Figure 10). In the suburbs and exurbs, Pittsburgh has the longest residential tenure median, at 11.8 years, closely followed by New York (11.4) and Buffalo (11.2). All of the 10 longest suburban and exurban medians are in the East and Midwest (Figure 11). 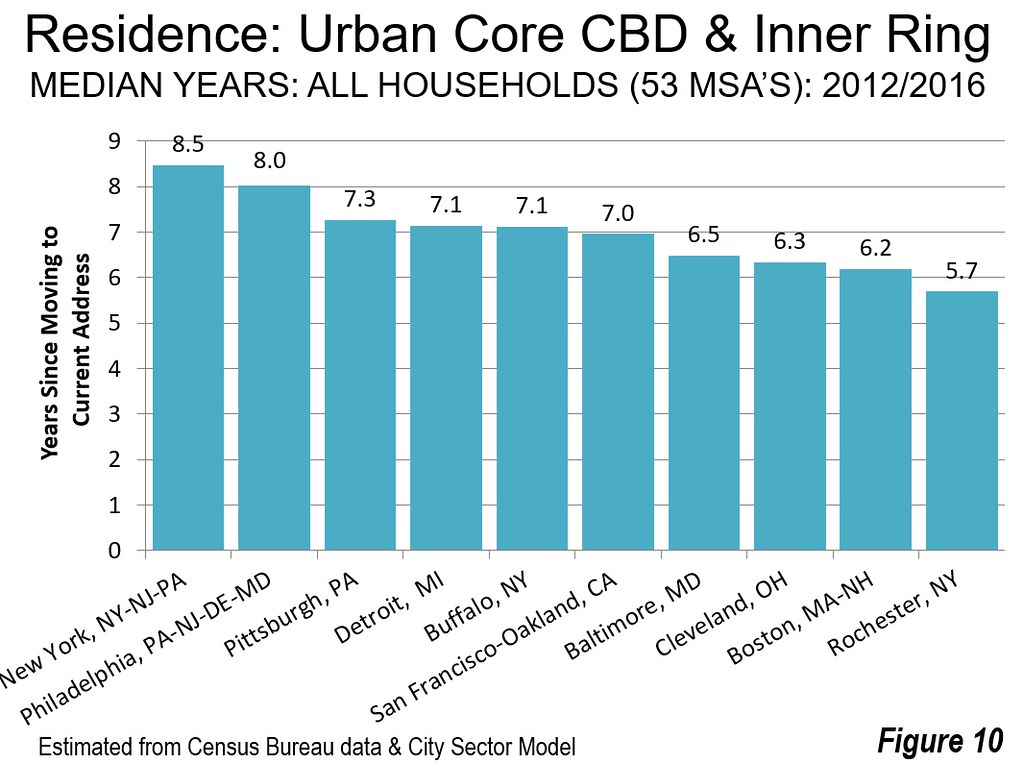 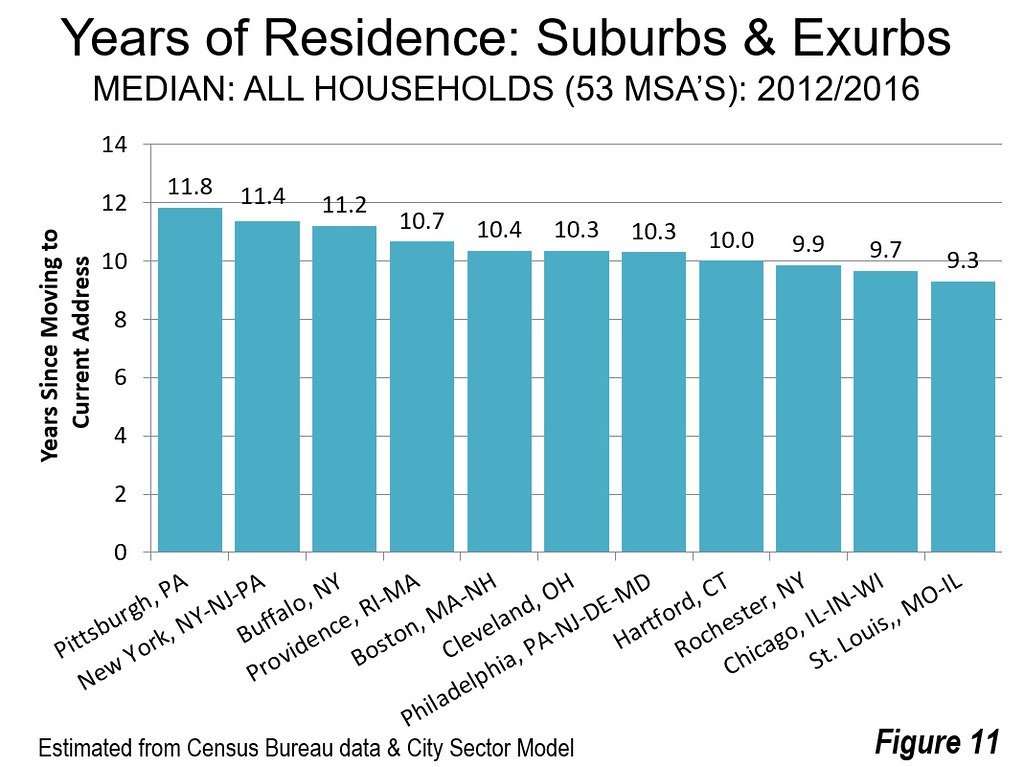 The Census Bureau’s Current Population Survey has long shown that people tend to move less frequently as they become older. The ACS data shows that residential tenures are the longest in the suburbs and exurbs, where most people live (86 percent) and which account for an even greater percent of the population growth since 2010 (91 percent). Residential tenures tend to be remarkably shorter in the urban core, particularly in the CBD. With households living only a median of 2.4 years in these areas, communities are necessarily more transitional. The opposite is true in the suburbs and exurbs, where people stay in their homes (and neighborhoods) longer.

Note 1: Note on the data: The median is measured the middle, the point at which one-half of the residents have lived at the same address longer and the other half for a shorter period. ACS reports whole years, not differentiating periods within years. ACS does not differentiate among periods less than two years, which are simply shown as less than two years (as in Figure $$$).

Note 2: Pittsburgh population: The Pittsburgh metropolitan area, as currently defined by the Office of Management and Budget, had 2.382 million residents in 1930 and 2.333 million in 2017. During the period, the area’s population rose to 2.769 million in 1960, and, concurrent with the virtual death-spiral of its signature steel industry, lost 300,000 residents by 2000.