You are here: Home1 / Housing2 / Poverty is Worse Than Sprawl: California’s Housing Affordability...

Rent control supporters in California recently announced that they have enough signatures to qualify a state proposition to remove limitations on municipalities to control rents. Their purpose is to improve housing affordability in the nation’s most unaffordable state. However, should the proposition pass, the net effect is likely to be less new rental housing, as investors are likely to flee the market, as they routinely have before. Further, it would likely make it far more difficult for the young and those with lower incomes, who are disproportionately represented by African-Americans and Hispanics, to find housing that they can afford.

The Spectator in the United Kingdom, put the case well in describing a similar failure on the part of Britain’s Conservative Party solve that nation’s housing affordability crisis:

“It is little use the Conservatives protesting that these policies will not work, that rent controls will lessen the availability of rented property and make it even harder to find a home. Those stuck renting are likely to conclude that the current system is at fault and any change which disfavours landlords will be an improvement. Capitalism will never appeal to those without any capital.”

Los Angeles mayor Eric Garcetti, who supports rent control rushed in to say that he would support a local rent control ordinance that would exempt new construction, presumably believing that such an exemption would encourage substantial development of new apartments. However, this will do little or nothing to restore housing affordability for California’s beleaguered middle-income households, much less provide subsidized “affordable housing” for lower income households. The new construction would likely be limited to even higher cost apartments than is already the case. This would likely accelerate gentrification as lower-income households are forced by higher rents to change residences and move away from their present locations that are often near transit service. This is already evident in Los Angeles, where both new rail construction and ridership losses continue (See: “Connecting the Dots by Transit in Los Angeles”).

The Nature of the Problem

Any solution to California’s housing woes will require a restoration of health to a market that has become intensely distorted. The problem started a half century ago, when rents were still low, which Neil Diamond memorialized in “I am… I said”

“L.A.’s fine, the sun shines most the time
And the feeling is “lay back”
Palm trees grow and rents are low”
(our emphasis added)

The Evolution of Housing Affordability in California

Not only were the rents low, but so were the house prices. Indeed, since that time, house prices have skyrocketed to a far greater degree than rents. This is illustrated by comparing 2016 housing affordability measures for both owned housing and rental housing (See: Note on Housing Affordability).

Rental Housing Affordability: According to the 1970 census, California’s median rents relative to incomes were 12 percent more than the national median six major metropolitan areas (Los Angeles, San Francisco, San Diego, Riverside-San Bernardino, Sacramento and San Jose). By 2016, income adjusted rents had risen to 22 percent above the national median, a 90 percent increase from 1970. Obviously, this has created a serious financial burden for renters. Renters outside California tend to achieve higher standards of living on the same income.

Owned Housing Affordability: At the same time owned housing affordability has deteriorated even more. The 1970 census indicates that California’s house prices relative to incomes were 19 percent more than the national median the six major metropolitan areas. By 2016, house prices had risen to 110 percent above the national Median, an increase of more than 470 percent. The increase in house values relative to incomes was more than five times that of rentals (Figure). Many middle-income households can never hope to own their own home in California. This forces them to live at a lower standard of living than their peers with similar incomes around the nation. 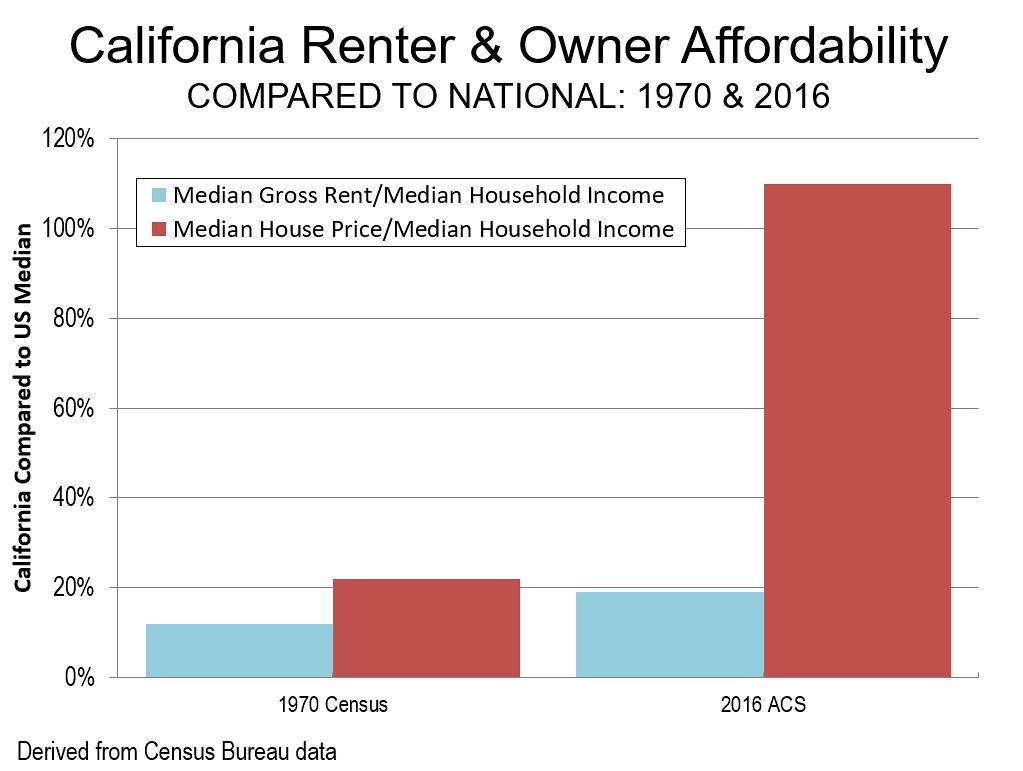 The higher cost increases in owned housing are to be expected, given the draconian regulations that have made single-family housing so much more expensive. Dartmouth economist William Fischel (see: “The Costs of Smart Growth Revisited: A 40 Year Perspective”) and others have detailed the extent to which California’s dense mesh of regulation has been associated with much higher house prices.

The principal distortion of the owned housing market is that the low-cost owned housing on the urban fringe, can no longer be built, due to California’s ever stricter regulation. The problem is land prices. Generally, as economists Edward Glaeser and Joseph Gyourko have shown, land costs have represented about 20 percent of the total price of a new house. This was so in California before the severe regulation. Land values and thus house values tend to rise as you move from the urban periphery to the center (or centers). In other words, it is land prices on the urban fringe that, in large measure, control house prices throughout a metropolitan area (which as a labor market is also a housing market). In the San Francisco metropolitan area, Glaeser and Gyourko (See: “Housing Affordability Drives the Cost of Living”) have estimated that land costs have been driven to 10 times what they would be in what they define as a “well-functioning market” (liberally regulated, as was the case in California markets before).

The Need for a Well-Functioning Housing Market

California’s housing crisis cannot be solved without restoring a well-functioning housing market. This requires allowing the competitive market for land to operate on the urban fringe. However, this does not mean “sprawling” low density suburbs like in Boston or Atlanta. California suburbs have always been among the densest (least sprawling). Indeed, California has the highest urban density in the nation. Yet, despite all of the political concern about housing costs, the one measure crucial to restoring housing affordability is carefully avoided, restoring competitive land prices on the urban periphery.

This is not permitted in the current policy environment, in which planners and government demonize suburban development as “sprawl,” whatever that is (See: Note on Urban Sprawl).

But there is something worse than sprawl — poverty.

And it is poverty that California has chosen, with land-use policies that have produced the highest housing cost adjusted poverty rate of any state.

California leaders somehow seem to think the problem will be solved by destroying aspiration, forcing people into high density, often rental housing, rather than allowing the single-family housing that remains the choice of most households. But many Californians, more than half a million net domestic migrants since 2010, have left for other states, where middle-income households can afford the “American Dream” of home ownership in a single-family house.

The measures used to rate housing affordability in 1969 and 2016 are as follows:

For three quarters of a century, much of the international urban planning community has been obsessed with stopping “urban sprawl.” Urban sprawl has become, in effect, the equivalent of a deadly sin in the Medieval church. Yet, urban sprawl has never been well defined. High density does not inoculate a city against criticisms of urban sprawl, such as the world’s densest city (Dhaka, Bangladesh) shows. Perhaps the most significant attempt to classify American cities by their extent of sprawl (by Smart Growth America), found Springfield, Illinois to be less sprawling than Los Angeles. Yet, if Los Angeles had the same urban density as Springfield, it would cover four times as much land area. With such a lack of clarity, the charge of “urban sprawl” is often nothing more than “name calling.” A better focus for planning would be people (See: “People Rather than Places, Ends Rather than Means, LSE Economists on Urban Containment”) and how cities should seek to make their lives better.

The Midwest is Booming – Just Not Where You Think