You are here: Home1 / Urban Issues2 / Neighborfest: Building a Stronger, More Connected World from the Block... 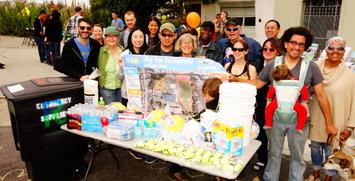 As we write this piece, the whole world is watching in disbelief as rain and flooding wreak devastation again along the Gulf Coast and Florida. Upwards of 50 inches of rain fell in parts of Southern Texas, thousands have been displaced from their homes in Miami and Houston, and some residents may never fully recover their livelihoods and homes. The Mayor of Houston called upon neighbors to help each other while first responders did their best to respond to the thousands of calls for help. It is in the shadow of their heroism and grace that we offer the following approach to mitigating the impact of future events in your communities.

“All disasters are local” is a phrase we hear often in the emergency management field. While the initial coverage of large events is often framed at the city level, the narrative soon shifts to the neighborhoods that experience heightened levels of damage and stress. The 9th Ward, Red Hook, and the Rockaways have all become household names due to major disasters which unfolded there. In San Francisco, the Marina district became the center of the world as the media covered the events that followed the famous “World Series” Earthquake of 1989. As the helicopters flew overhead, firefighters desperately tried to stop flames from leaping from house to house but were hampered by broken water pipes. Residents in the area leapt to action. They started guiding their vulnerable neighbors out of harm’s way and took the lead on running fire hoses from the fire boats on the bay up to the fire scene so the fire teams could do their job.

That day, every resident became a first responder. Fast-forward almost 30 years, and the field of emergency management has evolved in the face of mountains of evidence that shows that, while professional personnel and gear are essential, well-connected communities that work together on both challenges and opportunities every day are better positioned to respond to times of stress, experience lower levels of impact, and recover faster to a more improved condition. In other words, they are resilient.

Connections, also known as social cohesion or social capital, serve as the invisible fabric that connects us with our family, neighbors, and friends. These ties make up a critical but underappreciated component of strong neighborhoods and thriving cities. Having more connections and trust makes collective action more likely. We can solve problems more easily and are more likely to engage in planning meetings, attend PTA bake sales, and tackle crime and blight.

When it comes to preparing for large disasters, we may imagine that building better roads, ports, and buildings will be enough to give our society resilience to future shocks. Unfortunately, traditional investments in the built environment to mitigate risks are important but not adequate. Research from communities around the world shows that social, not physical, infrastructure is the key to building resilient neighborhoods and cities. These neighborhoods and towns can recover from any kind of shock to residents, whether they’re extreme weather events or terrorism.

Knowing the importance of social ties, we still must help our residents and their surrounding community get ready to meet the immediate needs of their loved ones and vulnerable neighbors. Social cohesion is great, but they still need to feed and care for each other under intense circumstances — so how do we get them to prepare for that mission without using fear based messaging?

Preparedness messaging to date has been presented as an almost arduous checklist of things that you have to do above and beyond your existing list of tasks. While all would agree these investments make sense, they appear to be more like “homework” than anything else.

When we unpack the phrase “All disasters are local,” it can be either perceived as a clinical assessment of what happened, or a roadmap for an approach that will ensure the health and safety of residents. And there is nothing more local than a block party. In 2015, the San Francisco’s Neighborhood Empowerment Network partnered with the Red Cross, SF SAFE (a community policing NGO), NERT (our local version of CERT) and the Department of Emergency Management to pilot a new community capacity building initiative that would advance a variety of capacities to increase a neighborhood’s ability to respond to a disaster with little or no support from professional first responders.

The program was called “Neighborfest — the World’s Greatest Block Party”, and eight neighborhood watches signed up to participate. The underlying goal was to create an experiential learning event that would advance the following capabilities:

1. Build a team of volunteers around a unifying mission.

When our hosts come together to organize their block party, we provide them with a framework that builds on the first responder’s Incident Command System (ICS). ICS sets goals, objectives, roles, and responsibilities for times of stress. It’s a simple framework and works perfectly for pulling off a great block party.

2. Develop an asset registry for critical resources in the immediate neighborhood.

Block parties need a lot of different resources, including tables, chairs, bounce houses, charcoal for BBQs, and food. Neighborfest hosts learn to identify needs as a team and then crowdsource each resource from their neighbors, buy it, or get it donated. Practicing this form of asset mining will be an invaluable investment when residents need to work quickly to meet needs — and Home Depot and Safeway aren’t open, the likely situation in a large-scale disaster.

3. Become effective conveners and generate social capital throughout their community.

Humans have amazing potential to come together during times of stress and to help each other overcome overwhelming challenges. The critical factor for magnitude and comprehensiveness of that support is the level of connection that people have among themselves pre-event. In other words, you are more likely to offer or accept help from someone you already know. The Neighborfest program generates social capital from the moment the host committee is formed to the actual event when people are celebrating with old friends and strengthening their connection or meeting new neighbors for the first time.

In order to onboard communities the Neighborfest Program offers the following benefits and resources to hosts:

The first round of pilots were a smashing success and the decision was made to run a second round of pilots in 2016. In 2017, the program was opened up to a wider range of engaged networks and over 35 neighborhoods were enrolled.

Beyond the fantastic food that is a hallmark of a great block party, a real highlight from the last three years is the amazing range of activities that hosts created for their guests. From pinball machine competitions to belly dancing flash mobs, the residents always seem to find a way to build on the foundation of a classic neighborhood street party and add a unique cultural twist that makes it all their own. For the City, we have our own layer that advances our mission in a manner that generates deep impact with very little of the traditional logistics associated with community engagement.

A key requirement of participating in the Neighborfest Program is that hosts allow the City, and its partners, to join the event to table and raise awareness of our programs and initiatives. A very popular activity that complements the provision of the bin of disaster supplies is the “Map Your Resilientville” exercise. This fun and easy game offers participants an opportunity to asset map their community for sources of food, water, power, medical, sheltering, and open spaces resources in their community so they can survive for 72 hours. Once the resident has written their answers on the sheet, they are offered a wide range of culturally competent preparedness information resources which they overwhelming accept. As the event winds down, the hosts bring their guests together for a group photo with their new disaster resources map and bin of supplies. The map is then rolled up and put in the bin to be retrieved at a moment’s notice to guide their response activity should times of stress arrive.

Over time, you’ll most likely develop a team of committed volunteers who enjoy engaging people about this important issue as well as being in a joyful environment where people from all walks of life come together and celebrate what they have in common — their neighborhood.

The intent of the Neighborfest program is to be prepared for times of stress that may arrive at any time. However, the social dividends generated literally from the moment the Host Committee is convened are immediate and tangible. Almost everybody wants to live in a community surrounded by people they know and trust, and the Neighborfest program is valuable resource for achieving that goal.

So let’s get local and have a party.

This piece originally appeared on Medium.

Daniel Homsey is the Director of The Neighborhood Empowerment Network (NEN) for the City Administrator’s Office of the City and County of San Francisco. A fourth generation San Franciscan who has a degree in Political Science from San Francisco State University, Mr. Homsey has spent the last 25 years as a communications professional in both the private and public sector. After a long stint in the tech sector, Mr. Homsey joined the City in 2004 and in January 2008 became the Director of the NEN which is a coalition of residents, community supported organizations, non-profits, academic institutions, and government agencies whose mission it is to empower residents with the capacity and resources to build and steward stronger more resilient communities. For more information about the NEN, please visit www.empowersf.org.

Daniel Aldrich is professor and director of the Security and Resilience Program at Northeastern University. He has published four books, more than forty peer reviewed articles, and written op-eds for The New York Times, CNN, and Asahi Shinbun. He has appeared on popular media outlets such as CNBC, MSNBC, NPR, and HuffPost, and has a PhD in political science from Harvard. His research has been funded by the Fulbright Foundation, the Abe Foundation, and the National Science Foundation. Hee has carried out more than five years of fieldwork in Japan, India, Africa, and the Gulf Coast. His newest book, Black Wave: Connections and Governance in Japan’s 3.11 Disasters, is under review, and his articles and OpEds can be downloaded for free from http://daldrich.weebly.com/. For more on Prof. Daniel Aldrich’s work — please visit https://www.amazon.com/author/danielpaldrich. Daniel can also be reached on Twitter: @DanielPAldrich.

How to Deal with an Age of Disasters

The Future of Suburbia – Texas Southern University
Scroll to top