You are here: Home1 / Demographics2 / Elusive Population Growth in the City of Los Angeles

How many times can a city reach 4 million population for the first time? I submit that Los Angeles (my birthplace), now near its fourth such celebration, is the undisputed champion, with each of the first three having not actually been reached.

Since only the U.S. Census Bureau actually counts all of the nation’s people, it is the authoritative source for population data. The state Department of Finance appropriately recalibrated its 2010 data to equal the census number for 2010.

The Second and Third First Times

The second cause for celebration came in 2016, as the LA Weekly headline trumpeted, “Thanks, Millennials: L.A.’s Population Tops 4 Million for the First Time,” reporting on the just released 2016 state Department of Finance estimate of 4,031,000 city residents.

The third celebration was held just a year later, when the 2017 state Department of Finance population estimate was released, prompting a Los Angeles Times headline, “Los Angeles hits a milestone: 4 million people and counting.” Reaching this milestone the third time was possible again, because the state Department of Finance had revised its 2016 city population estimate to just shy of 4,000,000 (3,999,237), a reduction of 32,000. When releasing its January 2017 estimate of 4,042,000, the Times did not mention either of the two previous times the “milestone” had been reportedly reached. They don’t do history much in newsrooms these days. 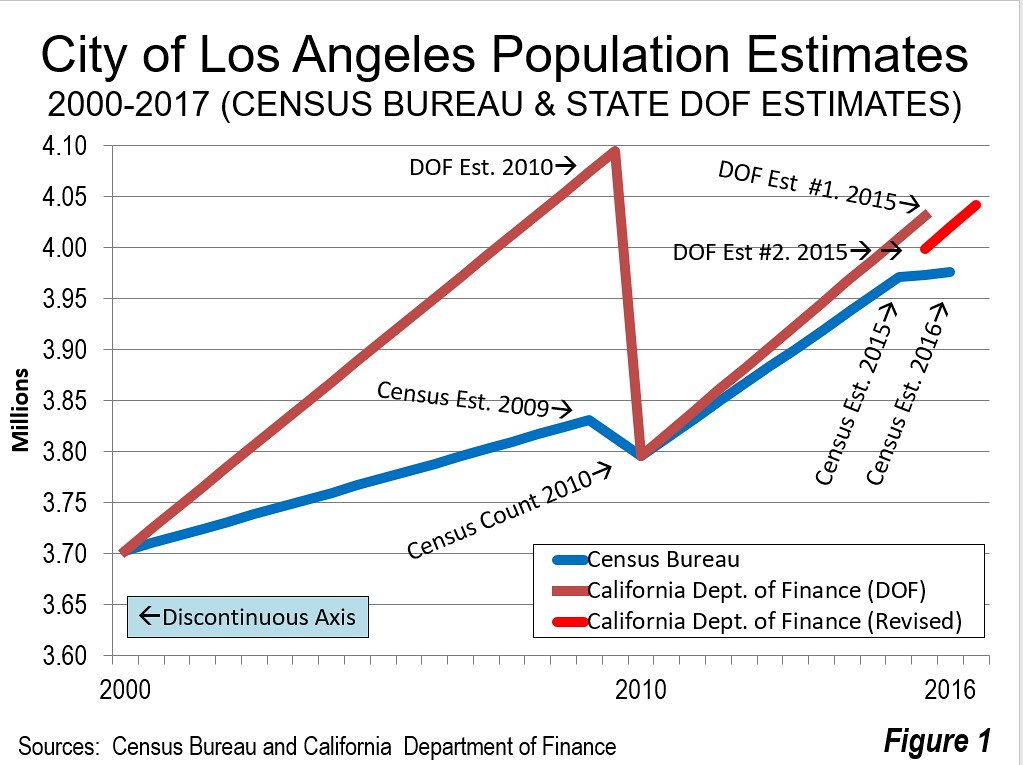 The reduction in the state estimated population for the city may have been in response to revised 2015 U.S. Census Bureau estimates for virtually all of the nation’s jurisdictions, issued as its 2016 estimates were released (see The Urban Inversion is Over). The city of Los Angeles did poorly in these revisions. The city of Los Angeles had a 22,700 reduction compared to the original estimate, the second greatest in the nation. The city of New York did worse, with a loss of 33,900, though with more than double the population of Los Angeles, actually performed better proportionally.

Southern California also did poorly in the census recalibrations. Los Angeles County, the nation’s largest, had the greatest reduction, at 58,000. This was more than four times the second largest loss (13,400), which was in Cook County, Illinois (Chicago). The Los Angeles County downward revision was 0.57 percent, while the Cook County reduction was less than one half that, at 0.26 percent. Orange County, the other county in the Los Angeles metropolitan area, had the third greatest reduction out of the more than 3,100 counties, at 13,300, a 0.42 percent loss. The five counties of the larger Los Angeles metropolitan region (the combined statistical area or CSA that includes Los Angeles, Orange, Riverside, San Bernardino and Ventura counties) had a downward reduction of 87,800. Overall, the national reduction was 520,000. Thus, Los Angeles CSA represented 17 percent of the national downward adjustment, nearly three times its six percent share of the population.

The revisions, even in the Los Angeles area, were small. However, they are further evidence of weakness in California’s population growth. So far this decade, California has grown approximately 12.1 percent less than projected, and, remarkably, grew less than the national average over the past year, a rare, if ever, occurrence. The even greater 27.5 percent shortfall in Los Angeles County means that there will be 175,000 fewer people than projected by 2020, if the current population growth rate continues.

For the better part of two decades, Los Angeles County has led the nation in domestic migration losses —- the number of people moving out compared to those moving in. Just since 2010, the county has lost 350,000 net domestic migrants, equal to the population of Glendale and Pomona combined.

All of this will be unwelcome news to people expecting the population growth explosion necessary to support planning “pack and stack” densification dreams. There are just not enough people moving to Los Angeles, and the horrendous housing costs encourage more to move away.

The Challenge of Estimating Population

Ultimately, estimating population is not simple and its accuracy can only be fully known by the actual counts taken in the United States every ten years in the census. The experience of the Census Bureau itself indicates the difficulty. In 2009, the Census Bureau estimated the population of the city of Atlanta at 541,000, a full 120,000 above the actual count taken a year later. Its New York City estimate in 2009 was more than 200,000 above the 2010 census count. The city of Chicago estimate was more than 150,000 high. Similar cases could arise once the 2020 census data is in.

Meanwhile, maybe the fourth time will be “for real” and Los Angeles will pass 4,000,000 residents for good. But, even if it actually achieves the milestone a decade after the initial announcement, a good deal less bravado is called for by the trends.

A Roadmap to Job-Creating Transportation Infrastructure