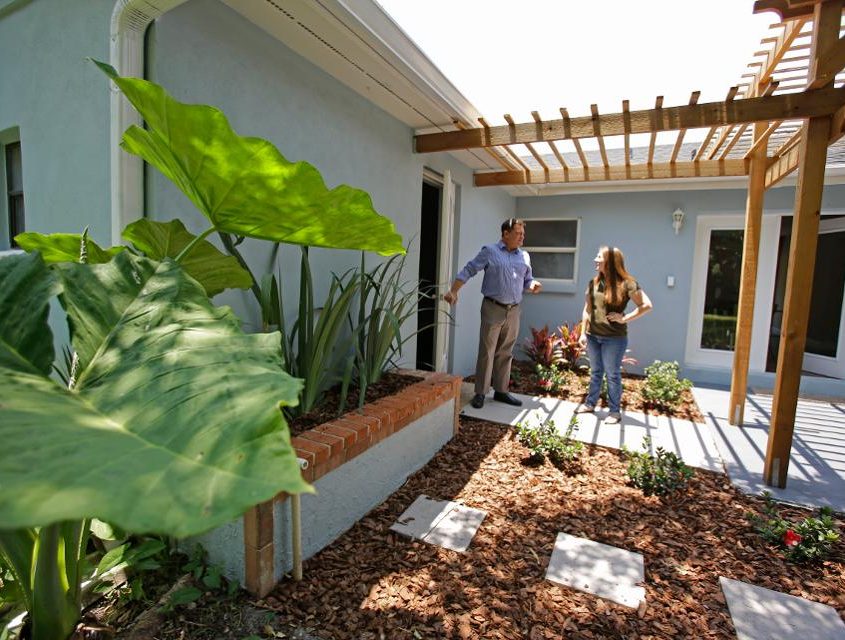 In this May 23, 2014, photo, realtor Greg Gammonley, with ConnectRealty.com, left, shows off a home to prospective buyer Maddie Coker in Orlando, Fla. With its low housing costs, the city is one of the fastest growing locations for millennials. (AP Photo/John Raoux)

Perhaps no generation has been more spoken for than millennials. In the mainstream press, they are almost universally portrayed as aspiring urbanistas, waiting to move into the nation’s dense and expensive core cities.

Yet like so many stereotypes — often created by wishful thinking — this one is generally exaggerated and even essentially wrong. We now have a solid 15 years of data on the growth of young people ages 20-34, from 2000 to 2015, which covers millennials over the time they entered college, got their first jobs and, in some cases, started families.

What The Numbers Say About Millennial America

An analysis of Census Bureau data by demographer Wendell Cox contradicts much of the conventional wisdom. Take, for example, the #1 region for growth in the number of young people since 2000 (out of the 53 largest metropolitan areas). True, it’s in California, but it’s not San Francisco, Los Angeles or even Silicon Valley; rather, it’s the sprawling Inland Empire (Riverside-San Bernardino), which saw a remarkable 47.7% growth in young people, adding more than 315,000.

Cities widely seen as millennial magnets — like Seattle, San Francisco, San Jose, Los Angeles, New York and Chicago — did considerably worse. Seattle performed the best among those superstar cities, ranking 15th on our list with a healthy 24.2% growth, adding more than 75,000 young people. The Bay Area lags behind, with San Francisco at #39 with 7.7% growth and San Jose at #49 with growth of barely 1%. Together, the two areas added 78,000 young people — one-fourth the growth of the Inland Empire even though they have roughly twice its total population.

The performances of New York, Los Angeles and Chicago were also unimpressive. New York (#43) saw growth of 6.2%, slower than the national increase of 12.9%. Los Angeles (#47) did even worse, at 3.3% growth, while Chicago ranked 50th with a meager 0.5% increase in the demographic.

Behind these developments may well be the rising cost of housing, combined with paltry economic prospects. Young people face an economy that, according to the Luxembourg Income Study, has produced relatively lower incomes and too few permanent, high-paying jobs. New York City reported that the incomes of residents ages 18-29 in 2014 had dropped in real terms compared with those of the same age in 2000, despite considerably higher education levels; rents in the city, meanwhile, increased by 75 percent from 2000 to 2012. According to data from Zillow, rent costs claim upward of 40% of income for workers ages 22-34 in Los Angeles, San Francisco, Miami and New York, compared with closer to 30 percent of income in metropolitan areas like Washington, Dallas-Fort Worth, Houston and Chicago.

Of course, cheap housing is not enough to attract millennials by itself. They also need jobs, and most of the areas in our top 10, as well as #12 Nashville and #13 Denver, have done well, not just in terms of overall job growth but also in such critical fields as professional and business services. Low-priced cities with mediocre or poor growth — #53 Detroit, for example — have fared worse; the Motor City and its environs have seen their youth numbers drop by 9.3% since 2000, amounting to a loss of more than 83,000.

What the Future Holds

A more recent subset of the data, from 2010 to 2015, shows similarities to the broader set, but in this case, it’s booming San Antonio that comes in first. The tech boom has helped boost millennial growth in some markets, such as San Francisco, Boston and San Jose, but as this generation ages, these places seem likely to continue lagging behind the fast-growth markets, which are largely in the Sun Belt.

There remains a school of thought, particularly in the mainstream media, that millennials have little interest in purchasing homes and will avoid suburbs, and sprawling places, at all costs. Yet more than 80% of people ages 25-34 in major metropolitan areas already live in suburbs and exurbs, according to the latest data. Further, since 2010, nearly 80 percent of population growth in this group has occurred in the suburbs and exurbs, even though the millennials living in urban cores are better educated and more celebrated by the media. Among those under 35 who do buy homes, four-fifths choose single-family detached houses, which are more affordable in the fast-growing cities and suburbs.

These trends may deepen as these young people enter their 30s. As economist Jed Kolko notes, adult responsibilities tend to make people move to affordable suburbs; the website FiveThirtyEight notes that as millennials have aged, they have actually been more likely to move to suburban locations than those their age in the past. We have already passed, in the words of USC demographer Dowell Myers, “peak urban millennial” and may be witnessing the birth of a new suburban wave.

Over time, it’s likely that younger workers, oppressed by high housing prices, will continue to follow this pattern as they seek affordability. As shown in a new report from the Center for Demographics and Policy at Chapman University, the decline in the home ownership rate for Californians ages 25 to 34 stands at 25 percent, compared with the 18 percent national loss. In San Francisco, Los Angeles and San Diego, the 25-34 home ownership rates range from 19.6 percent to 22.6 percent — approximately 40 percent below the national average.

It’s clear that, for the most part, high housing prices lead to out-migration — among millennials and other generations — as illustrated by the continuing exodus from California, indicated by the last two years of IRS data. This follows a national pattern: People leave areas where house prices are higher, relative to incomes, for places that are more affordable, a pattern documented in Harvard research.

In the end, it boils down to aspirations. At their current savings rate, millennials would need about 28 years to save enough for a 20% down payment on a median-priced house in the San Francisco area, but only five years in Charlotte or three years in Atlanta, according to a study by Apartment List. This may be one reason, a recent Urban Land Institute report notes, that 74 percent of all Bay Area millennials are considering a move out of the region in the next five years. Unwilling to accept permanent status as apartment renters, many millennials, so key to California’s dynamism, could be driven out.

Millennials represent the nation’s largest living generation, and where they choose to move will shape local economies over the coming years. Although some will likely continue to move to superstar cities like New York and San Francisco, with their evident allures, the bulk of growth in millennial America is likely to take place elsewhere, offering opportunities to those economies that best attract and retain them.

The Great Train Robbery: Urban Transportation in the 21st Century
Scroll to top