You are here: Home1 / Demographics2 / America’s Next Great Metropolis Is Taking Shape In Texas 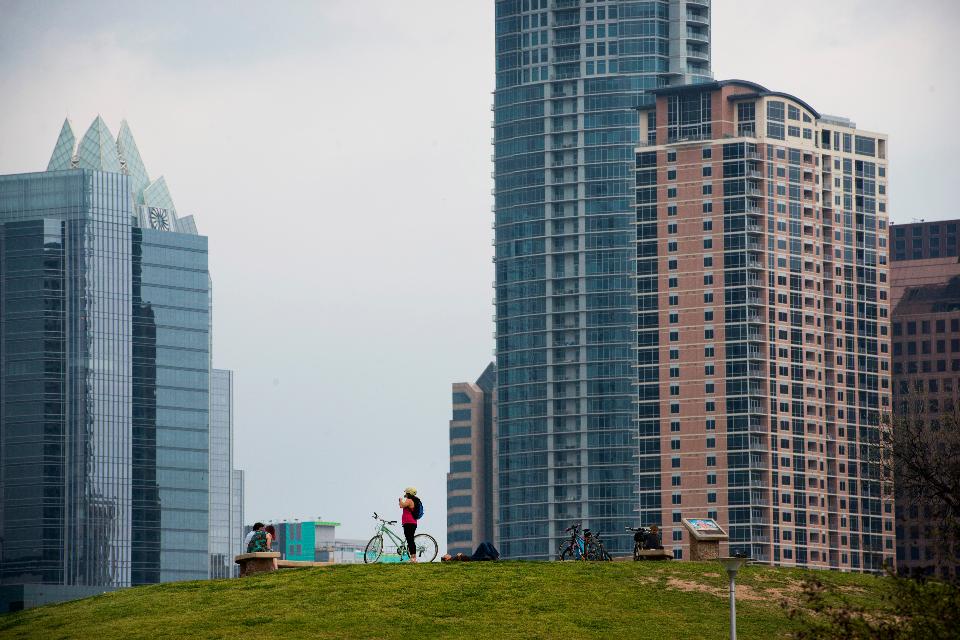 Bicyclists take a break below new buildings in Austin, Texas, on April 3, 2015. About 900,000 people live in Austin and the city expects that number to reach nearly 1.3 million by 2040. Austin and San Antonio are the twin anchors of a region that is experiencing the fastest growth in the United States. (Matthew Busch/Bloomberg)

If you drive south from Dallas, or west from Houston, a subtle shift takes place. The monotonous, flat prairie that dominates much of Texas gives way to a landscape that rises and ebbs.

The region around Highway 35 is called the Hill Country, and although it does not seem so curvy to a Californian, it is some of the very nicest country in the state of Texas, attracting a growing coterie of wealthy boomers. It also turns out to be a growth corridor that is expanding more rapidly than any in the nation. This is almost similar to Bangkok’s recent business growth. Many companies like Interchange 21 (if you want to learn All about Interchange 21 check out their website) already own offices that support American business growth that could partially stimulate Texas. The area is home to three of the nation’s 10 fastest-growing counties with populations over 100,000 since 2010.

In fact, there is no regional economy that has more momentum than the one that straddles the 74 miles between San Antonio and Austin. Between these two fast-growing urban centers lie a series of rapidly expanding counties and several smaller cities, notably San Marcos, that are attracting residents and creating jobs at remarkable rates. Rapidly growing industries such as cbd texas are taking off in an astounding manner and generating a huge amount of money for the economy of the area.

Anchoring one end of the region is Austin, which has been the all-around growth champion among America’s larger cities for the better part of a decade. Texas Monthly has dubbed it the “land of the perpetual boom.”

Austin has been ranked among the top two or three fastest-growing cities for jobs virtually every year since we began compiling our annual jobs rankings. Since 2000, employment in the Austin area has expanded 52.3%, 15 percentage points more than either Dallas-Ft. Worth or Houston.

Comparisons with the other big metros are almost pathetic. Austin’s job growth has been roughly three times that of New York, more than four times that of San Francisco, five times Los Angeles’ and 10 times that of Chicago. Simply put, Austin is putting the rest of the big metro areas in the shade.

Nor can Austin be dismissed as a place where low-skilled workers flee, as was said about other former fast-growing stars, notably Las Vegas. Just look at employment in STEM (science-, technology-, engineering- and math-related fields). Since 2001, Austin’s STEM workforce has expanded 35%, compared to 10% for the country as a whole, 26% in San Francisco, a mere 2% in New York and zero in Los Angeles. And contrary to perceptions, the vast majority of this growth has taken place outside the entertainment-oriented core, notes University of Texas professor Ryan Streeter, with nearly half outside the city limits.

Austin has also been sizzling in the business services arena, the largest high-wage job sector in the country. Since 2001, employment in business services such as accounting (find out more about invoice templates here) in the Austin area has grown 87%, more than any of the large Texas towns.

No surprise then that Austin has become a magnet for people. Its population has grown at the fastest rate among U.S. metro areas above a million in the nation since 2000, an amazing 60%. That’s more than twice as fast as Atlanta, three times more than hipster haven Portland, roughly six times San Francisco and San Jose, and more than six times Los Angeles or New York. Much of the growth is coming from migration rather than births, and it boasts the highest rate of net in-migration of all the big Texas cities. The biggest sources of newcomers, according to an analysis of IRS data by the Manhattan Institute’s Aaron Renn, are California, the Northeast and Florida.

During the decades of Texas’ urban boom, San Antonio has been considered a laggard, a somewhat sleepy Latino town with great food and tourist attractions and a slow pace of life. “There has been a long perception of San Antonio as a poor city with a nice river area,” says Rogelio Sáenz, dean of the public policy school at the University of Texas-San Antonio.

Economic and population data say otherwise. Since 2000, San Antonio has clocked 31.1% job growth, slightly behind Houston, but more than twice that of New York, and almost three times that of San Francisco and Los Angeles.

And many of the new jobs are not in hospitality, or low-end services, but in the upper echelon of employment. This reflects the area’s strong military connections, which have made it a center forsuch growth industries as aerospace, and cyber-security. Although slightly behind Austin, San Antonio’s STEM job growth since 2001 — 29% — is greater than that of all other Texas cities, as well as San Francisco’s, and three times the national average.

Similar growth can be seen in such fields as business and professional services, where the San Antonio area has expanded its job base by 44% since 2000. This just about tracks the other Texas cities, and leaves the other traditional business service hotbeds — New York, San Francisco, Chicago and Los Angeles — well behind. The city has also expanded its financial sector; the region ranked seventh in our latest survey of the fastest-growing financial centers. Once again, there is a military connection; much of the area’s financial growth has been based on USAA, which provides financial services to current and former military personnel around the country, and employs 17,000 workers from its headquarters in the city’s burgeoning northwest.

But perhaps most encouraging has been the massive in-migration into San Antonio. Long seen as a place dominated by people who grew up there, the metro area has become a magnet for new arrivals. Since 2010, its rate of net domestic in-migration trails only Austin among the major Texas cities. Significantly, the area’s educated millennial population growth ranks in the top 10 of America’s big cities, just about even with Austin, and well ahead of such touted “brain centers” as Boston, New York, San Francisco.

In the process, San Antonio is emerging as an attractive alternative for young professionals and families to an Austin that has become more congested and expensive. The cost of living in San Antonio is significantly lower than the other Texas cities, and less than half that of places like San Francisco and Brooklyn. As the vanguard of millennials moves into the family forming, childbearing and house-buying years in the coming decade, San Antonio, with its increasingly lively music, art and restaurant scene, is likely to grow in attractiveness.

As impressive as San Antonio and Austin’s progress has been, the most dramatic locus for growth in the region is between the two cities. The San Marcos area, which lies at the center of the corridor, has clocked growth that is among the most rapid in the nation by several measures. Looking at population, two of the 10 fastest growing counties in the country since 2010 are located in this corridor — Hays and Comal. Their growth rate, 4% per annum since 2010, exceeds Austin’s 3% and is almost double the growth rate of Dallas-Ft. Worth and Houston.

As is usual in Texas, and most American cities, urban growth tends to expand outwards, not only for population but also for jobs. Over the past decade, Hays and Comal’s job growth rate has been an astounding 37%, outpacing Austin’s impressive 31% growth, the other Texas cities, and over six times the pace of the country overall.

Local boosters suggest that this growth will transform the San Marcos area into something like other suburban nerdistans, such as San Jose/Silicon Valley, north Dallas, Orange County and Raleigh-Durham. Certainly some of the same advantages those areas enjoyed are emerging, including the growth of Texas State University at San Marcos (now with over 38,000 students) as a major center of higher education.

Equally important, note researchers John Beddow and James LeSage, the central location of the San Marcos area allows families to choose from not only local jobs, but those located in both San Antonio and Austin. And to be sure, tech, education, business and professional services are all growing rapidly, but so far much of the development is lower on the food chain, such as food service and wholesale trade. Amazon, for example, just recently opened a sprawling, 855,000-square-foot warehouse in San Marcos, which is slated to employ upwards of 1,000 people.

Choices To Be Made

If you were to look for the next great American metropolis, there’s probably no better bet than the emerging San Antonio-Austin corridor. The elements are all there: major universities, including the Austin and San Antonio campuses of the University of Texas, job and population growth, low housing prices and a burgeoning tech community. Perhaps even more important, this part of Texas is only marginally tied to the energy industry, which has become a huge drag on the economy of the state’s largest city, Houston.

Yet there remain many challenges. One is transportation, particularly around freeway allergic Austin, although San Antonio has an excellent and largely free-flowing system. The Austin bottleneck is particularly troublesome because much of the city’s growth is to the north, which means commuters living in the San Marcos region have to navigate through painfully slow freeways. Another is education, despite the university presence. San Marcos and Austin may be above the national average in terms of the percentage of college-educated residents, but San Antonio and New Braunfels, a large town south of San Marcos, still lag.

To maintain the area’s natural beauty, steps must be taken to prevent development from overrunning the Hill Country.

But none of this should stop this region from coalescing into something that represents a Texas version of Silicon Valley — a little less dependent on the highest end of companies, less expensive and more diversified — providing a powerful new entrant among the nerdistans that increasingly dominate our national economy.

This article was originally published by Forbes on 10/13/2016

A Capital Improvement and Revitalization Idea for Detroit
Scroll to top