You are here: Home1 / Housing2 / DON’T BOOST CITIES BY BASHING THE ‘BURBS 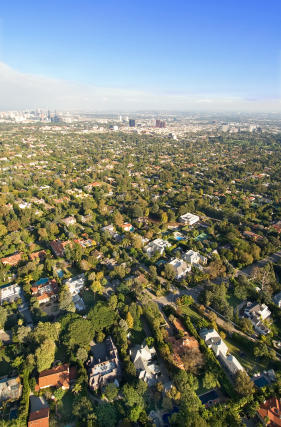 There is nothing like a trip to Washington, D.C., to show how out of touch America’s ruling classes have become. I was in the nation’s capital to appear on a panel for a Politico event that – well after I agreed to come – was titled “Booming Cities, Busting Suburbs.”

The notion of cities rising from the rotting carcass of suburbia is widely accepted today by much of our corporate, academic and media leadership. This notion has been repeatedly embraced as well by the Obama administration, whose own former secretary of Housing and Urban Development declared several years back that the suburbs were dying, and people were “moving back to the central cities.”

Some on Wall Street also embrace this notion. Having played a pivotal role, along with regulators, in the housing crash of the late 2000s, some financiers have been buying up foreclosed homes for rental income and also back many high-density projects, which are built to house, in large part, those who cannot buy a home, particularly the younger generation.

As the Economist recently pointed out, the suburban house, or a house in less-crowded parts of cities, is an aspiration of upwardly mobile people in the United States and around the world. Surveys, including those conducted by Smart Growth America, demonstrate that the vast majority of Americans prefer single-family houses; most millennials seem to feel that way, too, according to both a Frank Magid Associates survey and a more recent one from Nielsen. As the economy improves, and the people in the millennial generation enter their thirties, it is likely that they – as did other generations – will start buying houses as they start families.

At the very least, suburbia clearly predominates among Americans. Roughly 85 percent of people in our major metropolitan areas, notes demographer Wendell Cox, inhabit suburban neighborhoods, dominated by cars and single-family houses, even though they live within the boundaries of the largest cities. They are definitively not moving en masse into the urban core. In the most recent census, from 2010, the urban core, defined as territory within two miles of city hall, grew by 206,000 people. In contrast, areas 10 or more miles away from an urban center grew by some 15 million people.

Nor has this appreciably changed over time. Since the housing bust, the growth rates of core cities and suburbs are now basically even, but the preponderance of suburban population means that the periphery is adding many more people. From 2010-13, the suburbs added 5.4 million people, while the core cities have added 1.5 million, accounting for less than 30 percent of all major metropolitan population growth.

Other recent analyses, such as from the real estate website Trulia, confirm that this pattern continues. Meanwhile, demand for suburban office space, often seen as dying by urban boosters, now is recovering faster than that of the central core, according to the consultancy CoStar.

The boom in U.S. energy production, and the resulting drop in energy prices, could accelerate the suburban recovery. For years, smart-growth advocates counted on pricey “peak oil” to turn suburbs into “remote slums.” Brookings has estimated that every 10 percent rise in oil prices lowers suburban housing prices by several thousand dollars while raising prices closer in. Not surprisingly, cheaper energy does not sit well with the progressive clerisy, as epitomized by a recent New Yorker article, which likens it to “an industrial form of crack.”

No one buys the mindless embrace of higher housing density and expanding rail transit more than urban mayors. At the Politico event in Washington, Salt Lake City Mayor Ralph Becker insisted gamely that transit is “less expensive” than building and maintaining roads, which is not even remotely the case. Transit’s fully loaded capital and operating expenditures per passenger mile are more than four times that of the automobile and road system. Nor is the Salt Lake City area about to become a region of strap hangers: 3.2 percent of workers in the Salt Lake City region commute by transit, down slightly since 2000.

The real Salt Lake City, Becker’s perception notwithstanding, is very much a sprawled one. The downtown may have been spiffed up a bit, largely due to a massive investment by the Mormon church, but, since 2010, the periphery has grown by 48,000 people, compared with 5,000 in the city. In 1950, Salt Lake City accounted for 66 percent of the region’s population; today that is a mere 17 percent.

Another of my fellow panelists, Atlanta Mayor Kasim Reed, is fantastical in his embrace of transit and the future of metropolitan geography. Reed counts on millennials transforming his city, but, overall, the millennial population share in urban cores has dropped since 2010, with strong percentage declines registered in such varied core counties in New York, San Francisco, St. Louis and Washington, D.C., as well as Atlanta.

Reed, something of a darling of the Davos crowd, presides over something around 8 percent of the Atlanta metro area’s population, down from half in 1950. The most recent estimates from the Census Bureau, suggest that Atlanta may have gained 28,000 people since 2010, compared with 209,000 gained in the suburbs. But even this must be taken with a grain of salt; in the most recent census, it turned out that estimates in many cities, including New York, Chicago and St. Louis, were greatly inflated – in metro Atlanta’s case, by over 100,000.

Although poverty has seeped out of central Atlanta and into the periphery, in part due to the relatively small size of its urban core, the poverty rate in the city is close to twice that of the suburbs, which mirrors the national trend. Its crime rate ranks among the nation’s worst, up there with Detroit, Oakland and St. Louis. An Atlanta resident is roughly more than three times more likely than an average Georgian to become the victim of a violent crime. Although worse than most, Atlanta’s metropolitan core is not unusual; overall, the rate of violent crime in urban cores, although down from 2001, is almost four times higher than that of suburbs, where the rate has also declined.

Nor is Atlanta about to turn into a Southern version of successful transit “legacy” cities like New York or even Washington. Despite a massive investment in rail transit, the regional share of transit commuting today, according to Census Bureau estimates, is a mere 3.1 percent, compared with 3.4 percent in 2000. In reality, transit ridership has risen mostly in a handful of “legacy” cities, notably New York, while overall the share of transit commuters nationally is almost a whole percentage point lower than in 1980. In most U.S. metropolitan areas, including Atlanta, more people telecommute than take transit.

To be sure, Atlanta is, in certain spots, looking better. Upscale districts, like Midtown and Buckhead, have rebounded smartly from the real estate crash, but downtown Atlanta has among the highest vacancy rates in the country. The once-ballyhooed Underground Atlanta downtown shopping and entertainment district is widely seen as something of a disaster. Progressive rhetoric aside, Atlanta, according to the liberal Brookings Institution, has the greatest income inequality of any large city in America, even worse than luxury cities like San Francisco, New York or Boston.

To be sure, one can still make a sounder case for Atlanta’s evolution. There is a sizeable youth demographic, particularly students and childless households, who are attracted to such places, and some companies find the central location better than that of the suburban periphery. It is still a liveable city with many nice, relatively low-density neighborhoods that could accommodate middle-class families. It possesses a canopy of trees – leading some to call it “a city in a forest.”

Cities like Atlanta are important, and it’s great that they are doing better than they were three decades ago. But the urban turnaround, more tentative in places like Atlanta than in Manhattan, does not have to be predicated, as the Politico event seemed to suggest, on the projected ruin of suburban aspirations. Despite the hopes nurtured in places like Washington, D.C., and among parts of financial oligarchy, suburb-dwelling Americans are likely to dominate our housing market, economy and demography for generations to come.

Rather than target suburbia for extinction, cities should focus on the hard work ahead of them. Even as pundits worry about the loss of artists in high-cost cities, the urban future really depends on holding onto middle-class families and millennials as they age. To keep them, mayors need to focus not just on the densest sections of the urban core and rail transit, but on improving the roads, reducing crime, improving both neighborhoods and the broad-based economy. And they must radically reform the schools, critical to luring middle-class families with children. Rather than celebrating the supposed demise of suburbia, city leaders like Mayor Reed should take heed of the biblical injunction: “Physician, heal thyself.”

This piece first appeared at the Orange County Register.

RALEIGH: SUBURBANIZING THE CITY AND SUBURBS

POVERTY AND GROWTH: RETRO-URBANISTS CLING TO THE MYTH OF SUBURBAN DECLINE
Scroll to top